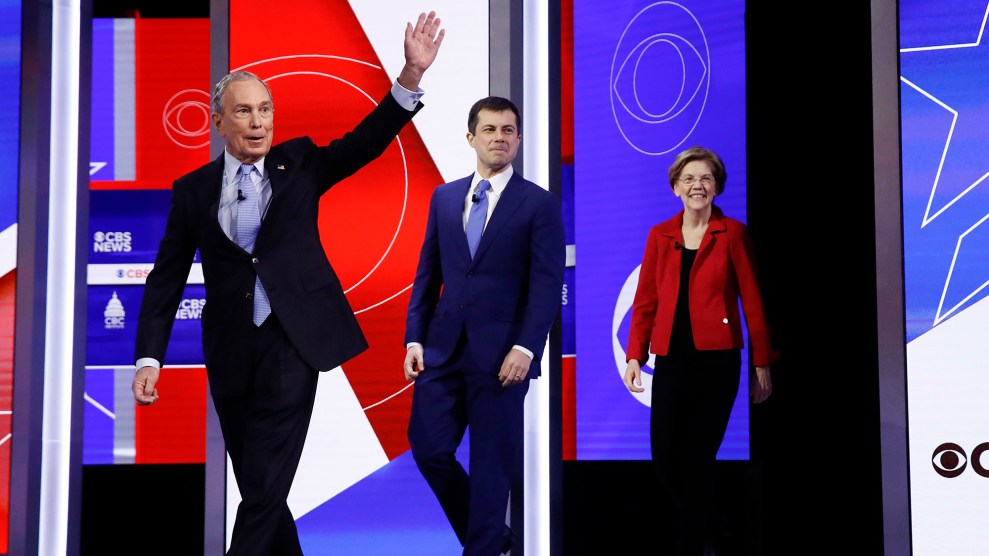 Michael Bloomberg entered the 2020 presidential race wagering that Democrats needed an electable candidate, and that Democrat would be him. But Elizabeth Warren made the case during the debate in Charleston on Tuesday night that Bloomberg would be a that shakiest candidate Democrats could nominate to run against Donald Trump.

Shortly into the debate, the moderator asked Warren why she had said Bloomberg was the “riskiest candidate. The Massachusetts senator responded with a list of his campaign contributions to Republican officials. She began with South Carolina, host of the night’s debate.  “Who funded Lindsey Grahams’ campaign the last time he ran?” Warren asked rhetorically. “Mayor Bloomberg.”

Warren then talked about the money Bloomberg gave to Republican Sen. Pat Toomey’s (Penn.) reelection efforts in 2016, when he went up against a Democratic woman, former Clinton White House advisor Katie McGinty, who narrowly lost the race.

There was another woman candidate he tried to knock out. “And guess what?” Warren asked rhetorically. “That was me,” referencing the donations Bloomberg gave to support her opponent in 2012, former Sen. Scott Brown (R-Mass.). She added Bloomberg had called her campaign platform a “sideshow.”

“The core of the Democratic Party will never trust him,” Warren said about his past support of Republicans. “The fact that he cannot earn the trust of the Democratic party means he is the riskiest candidate on this stage.”

Bloomberg, who was elected to three terms as mayor of New York City as a Republican or independent, leaned on that history in his rebuttal. “In an overwhelmingly Democratic progressive city,” Bloomberg said, “they elected me again and again.”

Bloomberg has a long history of donating to both Democratic and Republican candidates. The behavior has drawn the ire of activists who see Bloomberg as playing both sides in a way that harms their movement.

Bloomberg invested hundreds of millions of dollars in the 2018 midterms in an effort to return the House to Democratic control; several of the 21 candidates who received those millions have endorsed his run for the presidency. As Bloomberg explained that effort, he appeared to almost say “I bought them.”

"I bough … I got them." pic.twitter.com/cnWBySYmd0