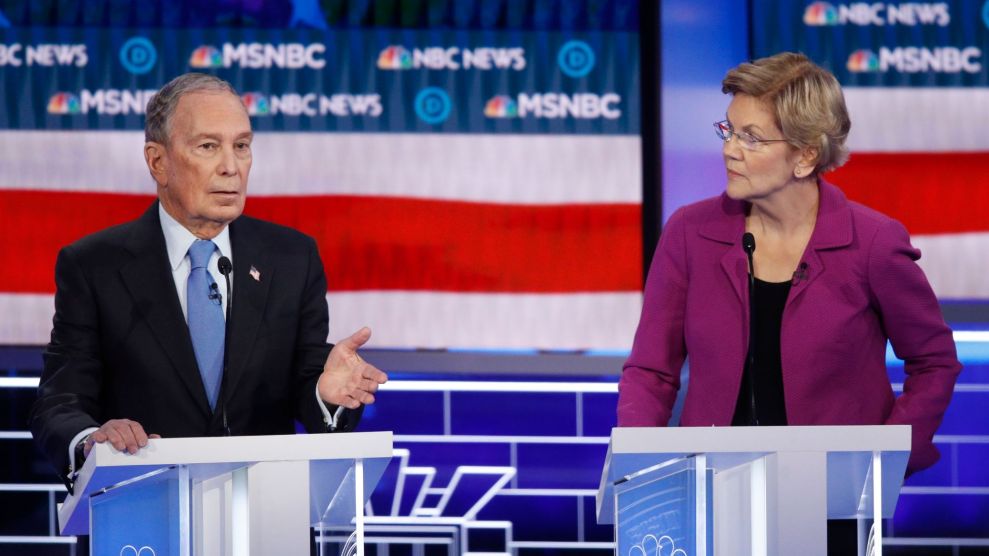 Michael Bloomberg, the billionaire former mayor of New York City, made his debate-stage debut Wednesday night, and the other candidates were ready to pounce.

From the outset, Bloomberg’s rivals attacked his criminal justice policies. Under Bloomberg, the New York City Police Department’s stop-and-frisk policy targeted people of color in the city and led to a disproportionate number of black and brown men being stopped, searched, and detained by police. To make matters worse for Bloomberg, his 2015 comments about the racist and controversial practice recently resurfaced and led to #BloombergIsARacist trending on Twitter, as I noted last week:

Bloomberg can be heard defending the policy during a speech at the Aspen Institute. “Ninety-five percent murderers and murder victims fit one M.O.,” he said. “You can just take the description, Xerox it, and pass it out to all the cops. They are male, minorities, 16-25. That’s true in New York, that’s true in virtually every city.” The former mayor then went on to say that all crime takes place in communities of color. “Because we put all the cops in minority neighborhoods,” he explained. “Yes, that’s true. Why do we do it? Because that’s where all the crime is.” Bloomberg requested that the audio not be released.

Although Bloomberg apologized for stop-and-frisk prior to entering the race, his support for the policing tactic loomed large over the debate. One of the moderators, NBC News’ Lester Holt, brought up his 2015 comments. “What does that kind of language say about how you view people of color or people in minority neighborhoods?” Holt asked.

Bloomberg did not directly answer, instead choosing to say that he was “embarrassed” about how the policy turned out. “What happened, however, was it got out of control,” he continued. “When I discovered that we were doing many, many, too many stop-and-frisks, we cut 95 percent of it out.”

Former Vice President Joe Biden reminded him that it was then-President Barack Obama who sent a federal monitor to the city in response to stop-and-frisk abuses; the policy was eventually ruled unconstitutional by a federal court.

Elizabeth Warren, who was highly critical of many of her opponents during the debate, also weighed in, criticizing the way Bloomberg phrased his apology.