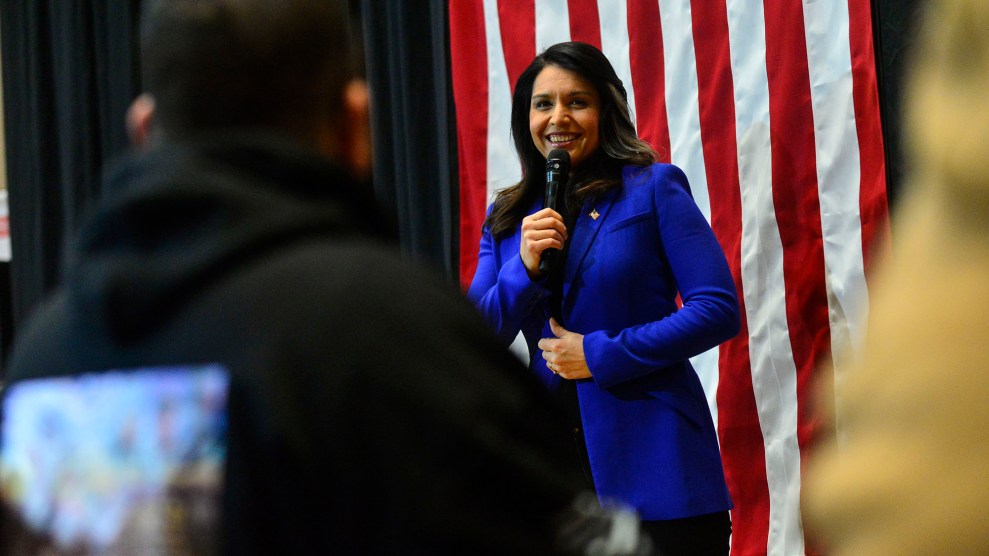 About a half-hour before Hawaii Rep. Tulsi Gabbard’s town hall here on Thursday, a guest at the Fireside Inn & Suites in West Lebanon, New Hampshire, ducked into the conference room to inquire about all the signs. When a volunteer filled him in, he sounded skeptical. “She’s running for…president?”

Yes, and to hear some of the folks here tell it, she might even win.

Gabbard’s long-shot campaign has yet to take off nationally, and there are a lot of reasons for that—there’s her strange family…cult?; her public feud with Hillary Clinton; her failure to qualify for the last three debates; and the obvious fact that Bernie Sanders, who she backed in 2016, is still here and now may be the frontrunner. But Gabbard is holding down about 5 percent of the vote in New Hampshire, according to the Suffolk University tracking poll. That’s potential spoiler territory, with the first-in-the-nation primary just days away.

So where’s all that support coming from? If the crowd at the hotel was any indication, it’s a whole lot of Republicans and independents who supported President Donald Trump four years ago.

“She has a lot of class, but she’s sort of the Democratic Trump,” said Anthony Stevens of Vermont, who was there with his fiancee, a Democrat who was still undecided. Stevens meant it as a good thing—after all, he’d voted for the president four years ago. This time around he was looking for someone different (Trump does not have a lot of class). He liked Gabbard’s anti-war stance and was drawn, again, to a candidate who had clashed with her own party.

“She’s got to feel like Rudolph—they won’t let her play in the games,” Stevens said, alluding to her exclusion from the most recent debates. (Gabbard has failed to meet the qualifying threshold for Friday’s debate at the University of New Hampshire.)

A few seats over sat Bob Gill, a former Marine who is now a horse farmer in New Hampshire. He had also voted for Trump. Gill was still undecided, but liked Gabbard because he thought she might be the kind of voice who could maybe bring people back together. Plus, “I like that she’s looking to save some money on the wars and everything,” he said. But he had no patience for the rest of the field, particularly the septuagenarians topping the polls in some of the Super Tuesday states. “I’d put them out to pasture,” he said.

Sitting in the back, Lisa Buck-Rogers, an Air Force veteran and New Hampshire voter, told me she also supported Trump, but would most likely vote against him this fall. Gabbard’s criticism of American military actions struck a chord with her. “I like how she feels about respecting our veterans and making sure their lives are spent accordingly.” She likes some of what Sanders says, too, particularly on health care, but she’s “’Gabby’ as long as I can.”

Ask a voter what they like about, say, Pete Buttigieg or Elizabeth Warren, and you might get a range of answers. But the responses I got about Gabbard were unusually consistent—what Scott Decker, a supporter from Burlington, Vermont summed up as “anti-imperialism.” Other candidates oppose foreign intervention to varying degrees, but it dominates Gabbard’s message, so much so that to these supporters, it supersedes the kinds of policies (like single-payer health care) they might consider a deal-breaker in the eyes of someone else.

Ken Rafferty, an independent from Lebanon, New Hampshire, voted for former Hewlett-Packard CEO Carly Fiorina in the Republican primary in 2016, but he didn’t vote in the general election that year. “I’m glad I didn’t, because I never would have voted for either one of those guys,” he said, referring to Trump and Clinton, though, “in retrospect, I’m kind of concerned about Trump.” Rafferty disagreed with much of what Gabbard was pushing, particularly when it came to health care. But because of her criticism of American military action in the Middle East, and of her own party, Gabbard was the only Democrat he’d even consider supporting.

Independents can vote in whichever primary they choose in New Hampshire, and Gabbard is leaning into her support from unaffiliated voters. At the town hall on Thursday, she asked, as she often does, for a show of hands from the Democrats in the room. There were maybe six of them, in a crowd of about 40. Another half dozen were Republicans, the rest independents. (Though unfortunately for Gabbard, many of these independents were from neighboring Vermont.) A few people in the audience applauded at the results.

For these Republicans and independents, it helps that Gabbard sometimes seems to have as much of a beef with the Democratic Party establishment as they do.

“Anybody who is banned from the mainstream media and who gets shit from Hillary Clinton is my kind of person,” said Decker, a Burlington, Vermont, resident who said who would also support Sanders in the general election “if he gets there.”

“Gabbard knew right away that the DNC was fixed,” Buck-Rogers said, referring to Gabbard’s decision to step down from her post as Democratic National Committee vice-chair in 2016.

Still, while Gabbard is happy to go on Fox News, engage Trump voters, and feud with her party, there’s still one line she won’t cross. During the Q&A that followed her stump speech, she took a question from a man in a Tulsi T-shirt, named Paul Woodman, who was sitting next to a man wearing a “Fuck Trump” pin. “I voted against Hillary, which means I voted for Trump,” Woodman told her. He just might do it again, if Democrats don’t nominate the congresswoman standing in front of him. Gabbard was the only Democrat he could stomach, and he was convinced she wasn’t going to get a fair shake from the DNC, even if she ended up with enough delegates to compete for the nomination. “Have you ever considered…changing parties or re-affiliating?,” he asked.

She smiled, thanked him for the question, and tried to dispel, once more, the idea that there’s no longer a place for her in the party. “First of all: no…”