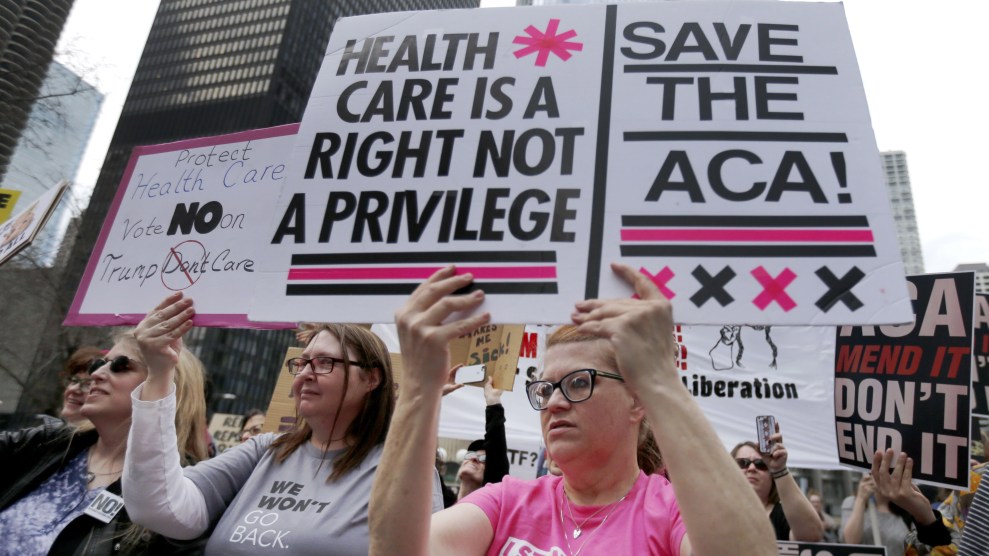 As the coronavirus pandemic, which has infected more than 30,000 people in the United States, rages around the world, President Trump continues to support a lawsuit raised by several Republican attorneys general that could invalidate the Affordable Care Act and leave more than 8 million people uninsured.

In a letter released Monday to mark the 10th anniversary of former President Obama’s signing of the Affordable Care Act, former Vice President Joe Biden urged the plaintiffs to drop the Texas v. United States lawsuit. “At a time of national emergency,” Biden wrote, “which is laying bare the existing vulnerabilities in our public health infrastructure, it is unconscionable that you are continuing to pursue a lawsuit designed to strip millions of Americans of their health insurance and protection under the Affordable Care Act, including the ban on insurers denying coverage or raising premiums due to pre-existing conditions.”

Trump has repeatedly and falsely espoused his commitment to protecting people with preexisting conditions while working to remove their protections under Obamacare. And, as the anti-Obamacare lawsuit awaits review by the Supreme Court, the ACA remains a vital tool for ensuring that Americans have access to care during an unprecedented public health crisis.

As Kaiser Family Foundation points out, the Affordable Care Act will allow people who lose their employer-based insurance because of layoffs caused by the coronavirus to purchase coverage on the health insurance marketplace. In some cases, it’s also allowing currently uninsured Americans to get covered in anticipation of the coronavirus outbreak: Nine states, including New York, an epicenter of the pandemic, have opened special enrollment periods to allow people to sign up for insurance outside of the normal open enrollment period, which ended December 15. The Trump administration has even considered launching a national special enrollment period, the Wall Street Journal reports, allowing residents of the 32 states that rely on the federal insurance exchange, rather than state-based marketplaces, to access care.

That’s right: Trump is considering using the Affordable Care Act to provide coverage to the nearly 28 million uninsured non-elderly individuals in the United States, while at the same time backing legislation that could remove the coverage altogether.

“You have in your power the ability to make life safer, healthier, and a little bit easier for your constituents,” Biden wrote in his letter. “All you have to do is drop your support for this ill-conceived lawsuit, which is even more dangerous and cruel in this moment of national crisis.”