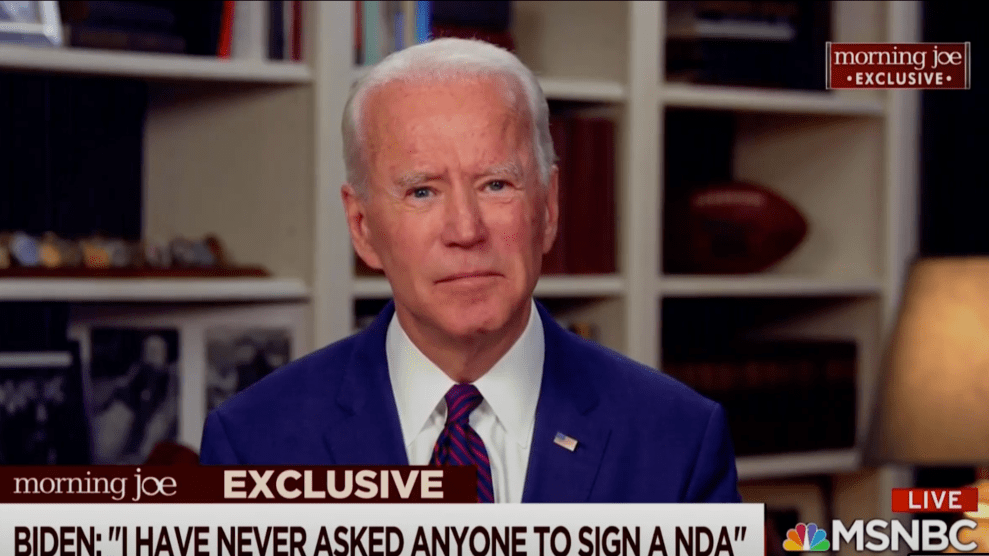 For weeks, Joe Biden had remained silent about the accusations leveled by Tara Reade, a former Senate staffer who alleges Biden sexually assaulted her more than 25 years ago. When he finally broke that silence early Friday morning, he reiterated what his campaign has maintained all along: The assault never happened.

Throughout their conversation, Biden said he supported Reade’s right to make her claims. “I’m not going to question her motive, I’m not going to attack her,” Biden said. He noted that neither he nor his campaign have reached out to Reade. When Brzezinski asked what Biden might say to Reade, he sidestepped the question. “I don’t know what is behind any of it,” Biden said. “It never happened. It never happened. Period.”

In the hour leading up to Biden’s appearance, the former vice president released a statement that underscored that stance. In it, he cited statements by former senior staffers in his office who have disputed Reade’s claim that she complained to them at the time about harassment by Biden. Biden also called for the secretary of the Senate to request of search of the National Archives for a record of a formal complaint Reade says she she filed in 1993; Reade does not have a copy of the complaint and media outlets have not found one. “This is an open book,” Biden told Brzezinski, “There’s nothing for me to hide.”

Brzezinski asked why Biden wouldn’t also subject his Senate and White House papers, currently under seal at the University of Delaware until after he leaves public life, to a search, too. Biden maintained that there was nothing in those papers that related to Reade because personnel files would not be stored in those records, and he said that the records might contain other material that could be used as “fodder in a campaign” and be “really taken out of context.”

Brzezinski also pressed Biden on what she considered to be a shift in the position he took during the 2018 confirmation hearings for Brett Kavanaugh, who had been accused of sexual assault by Christine Blasey Ford. At the time, Biden said that “you’ve got to start off with the presumption that at least the essence of what she’s talking about is real, whether or not she forgets facts, whether or not it’s been made worse or better over time.”

When Brzezinski mentioned that statement, Biden said he stood by it. “Women are to be believed” and “given the benefit of the doubt,” he said. “We should start off with the presumption that they’re telling the truth.” But “the facts exist,” he added. “This never happened.”

Last April, Reade told her local newspaper that Biden inappropriately touched her neck and shoulders when she worked in his Senate office in the early 1990s, making her feel uncomfortable. She also claimed that he asked her to serve drinks at an event because he liked the way her legs looked. Reade’s claims emerged alongside similar ones from seven other women who said Biden’s had touched them in unwanted ways. Biden apologized for that behavior in a video before launching his third run for the presidency.

But as Biden’s status as the Democratic frontrunner solidified in late March, Reade appeared on Katie Halper’s podcast to allege that Biden had pressed her up against a wall, kissed her neck, and digitally penetrated her in a Senate hallway in 1993. Reade says she had not previously shared these details out of fear of retribution and that she did not include the more serious allegations in the complaints she said she filed with the Senate. However, a friend of Reade’s and one of her former neighbors have told journalists that she disclosed the alleged assault to them during the 1990s. The Intercept uncovered a 1993 clip of the Larry King Live show in which Reade’s mother anonymously called in to ask for advice on behalf of her daughter who, she said, had been having “problems” with a “prominent senator.”

For weeks, the Biden campaign has adamantly denied the allegations, and it circulated talking points to Democratic allies that asked them to do the same. This week, former Georgia gubernatorial candidate Stacey Abrams, who’s been vying to be named Biden’s vice presidential pick, told CNN (inaccurately) that the New York Times‘ had found Reade’s claims “not credible” and that she believed Biden over Reade. House Speaker Nancy Pelosi (D-Calif.), who endorsed Biden on Monday, said she had been “satisfied” with Biden’s response to the allegations. Reade told Buzzfeed News on Thursday that those repudiations had made her feel “discounted” and “marginalized” by political leaders she admired.

Reade has criticized the media and Democratic insiders for not demanding answers from the former vice president about her claims. Biden has sat for multiple live interviews on television and social media since major news outlets wrote stories about the allegations, and interviewers did not ask him any questions about Reade until his Friday MSNBC appearance.