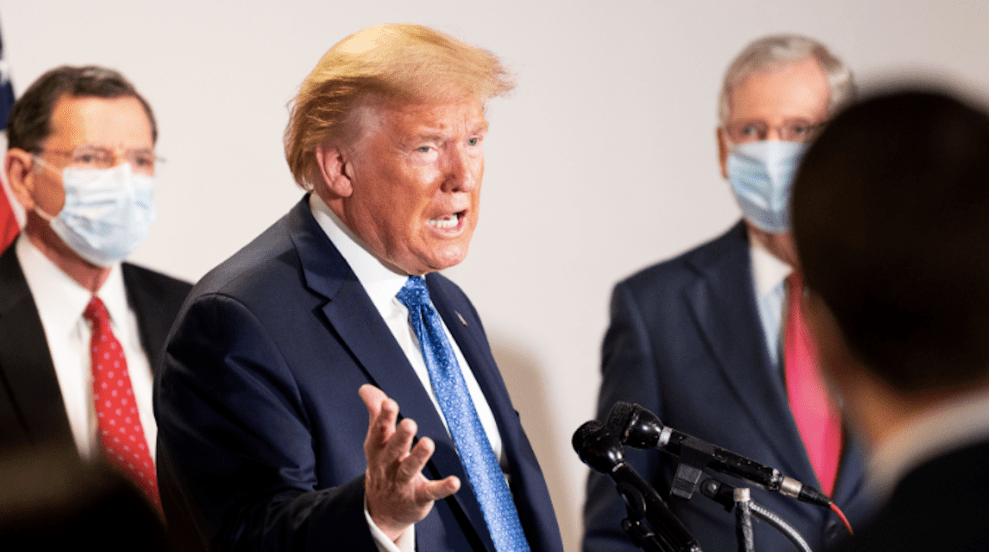 President Trump threatened to halt funding in Michigan and Nevada on Wednesday over those states’ pushes to expand mail-in voting in response to the coronavirus—yet another signal that the president views efforts designed to make voting easier as a danger to his reelection bid.

In targeting the two states, Trump promoted several falsehoods: Michigan did not, as the president claimed, send voters absentee ballots; the state mailed out applications for absentee ballots. Michigan’s secretary of state, Jocelyn Benson, noted this in her response to Trump’s attack. “We sent applications, not ballots,” Benson wrote on Twitter. “Just like my GOP colleagues in Iowa, Georgia, Nebraska, and West Virginia.”

While Nevada is sending voters absentee ballots, the move pertains only to the state’s primary. Still, Trump falsely characterized both vote-by-mail pushes as illegal, complaining that each would lead to rampant voter fraud.

Breaking: Michigan sends absentee ballots to 7.7 million people ahead of Primaries and the General Election. This was done illegally and without authorization by a rogue Secretary of State. I will ask to hold up funding to Michigan if they want to go down this Voter Fraud path!..

State of Nevada “thinks” that they can send out illegal vote by mail ballots, creating a great Voter Fraud scenario for the State and the U.S. They can’t! If they do, “I think” I can hold up funds to the State. Sorry, but you must not cheat in elections. @RussVought45 @USTreasury

It wasn’t immediately clear to what funding Trump was referring, whether it be coronavirus relief, election assistance money, or federal distributions at large. Michigan is currently struggling with catastrophic flooding from a dam failure, which could prompt state officials to seek federal disaster relief funding.

Of course, Trump likely lacks the legal authority to carry out his threats, as such election protocols fall under state jurisdiction. But the tweets appeared to eerily echo Stanford law professor Pamela Karlan, who warned during the president’s impeachment that if Trump were not removed from office, he wouldn’t hesitate to withhold federal funding from a state in exchange for political favors.