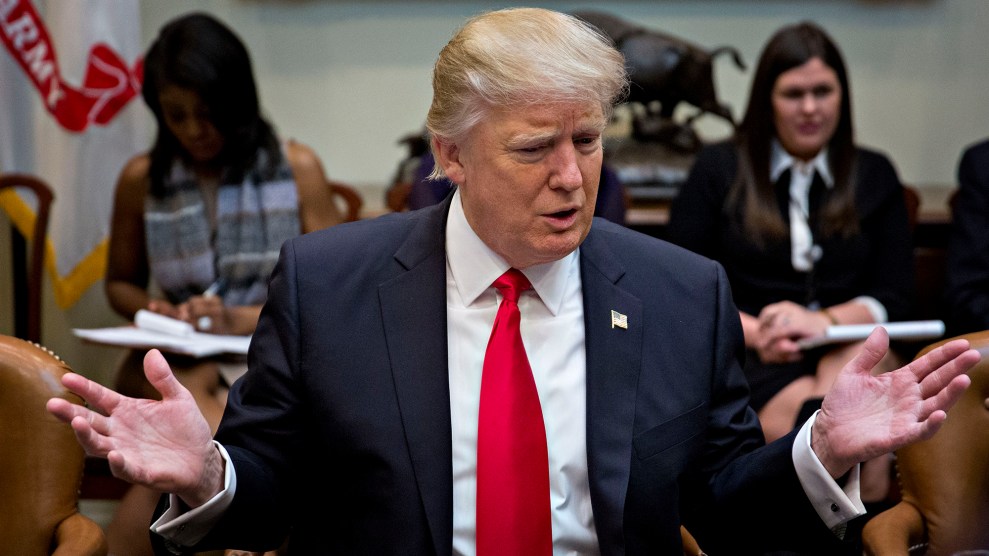 Hackers trying to extort a prominent New York City celebrity law firm doubled the ransom they were seeking on Thursday to $42 million, claiming that they have dirt on President Trump that could doom his reelection chances.

VICE News reported Friday morning that the hackers—who the prominent law firm of Grubman, Shire, Meiselas, & Sacks confirmed had targeted them with ransomware, claiming to have several hundred gigabytes of sensitive material involving Drake, Lady Gaga, and other celebrities—are now threatening to release material on Trump. The hackers have posted screenshots of a what they say is a Madonna tour contract to prove the trove’s legitimacy. The law firm confirmed to Page Six they’d been targeted and are working to address the situation.

“The next person we’ll be publishing is Donald Trump,” the hackers wrote on their website, according to VICE. “To you voters, we can let you know that after such a publication, you certainly don’t want to see him as president.”

That last claim is a bit odd, though: What could the hackers have that is worse than what’s already on the record? Before the last election voters heard Trump admit, on tape, to sexually assaulting women. Although he vehemently denies it, he’s been accused by dozens of women of sexual harassment and assault dating back to the 1970s. He’s been filmed asking Russia to hack his 2016 opponents’ emails. One of his lawyers and longtime fixers is in prison after admitting to lying to Congress about a Trump real estate deal and to campaign finance violations as part of Trump’s scheme to pay off two women who’d claimed prior affairs with the president. His onetime campaign chairman was imprisoned for tax fraud and other financial crimes. He was impeached in December after extorting a foreign government for dirt on a political opponent in exchange for already-approved military aid. According to the Washington Post, he’s told more than 18,000 lies or misleading claims during his presidency.

And, perhaps most viscerally these days, he’s vacillated between downplaying the coronavirus and taking it seriously, portrayed himself as the pandemic’s victim, and encouraged protests against his own administration’s guidelines on how localities should address public health concerns. Nearly 86,000 Americans have died and more than 36 million Americans have lost jobs.

So maybe the hackers have something truly novel and explosive. But given what we already know, that’s hard to imagine.