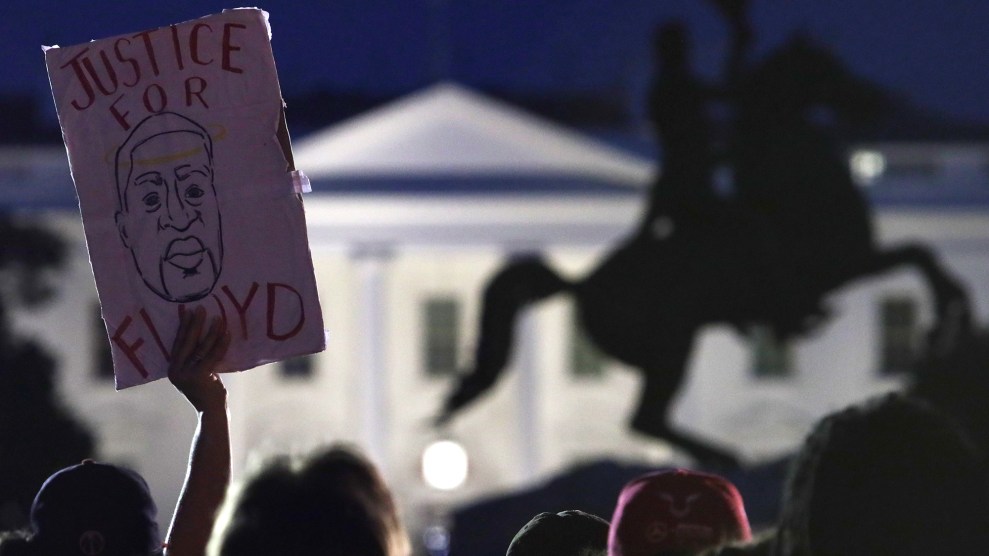 Demonstrators protest near the White House on May 31, 2020. Alex Wong/Getty Images

Update 2:30 p.m. ET: Following publication of this story, a Facebook spokesperson informed Mother Jones that “a bug kept some ads from displaying in the Ad Library” this morning. The Trump campaign did not in fact pull its ads; they were simply not visible for a few hours. The original story is below.

After a tumultuous weekend of protests, on Monday morning President Donald Trump’s reelection campaign appears to have gone dark on Facebook.

The president has not addressed the nation as it undergoes historic unrest, with the exception of incendiary posts on Twitter and Facebook. On most days, the president’s campaign is running thousands of Facebook ads. But on Monday, the Trump campaign’s page in the Facebook Ad Library showed virtually none.

The only ads running appeared to be a small number selling “Space Force” T-shirts.

The president’s advisers are evidently unsure about how to handle the present moment. Recently, campaign aides and Trump supporters have been pushing for the campaign to unleash its war chest on Joe Biden, while those in charge of the campaign have opted to hold off on such a broadside amid the coronavirus pandemic. Meanwhile, the campaign has struggled to find a message that successfully works against Biden.

Now, with the nation at a standstill, crushed by a pandemic, an economic crisis, and protests against police brutality, Trump’s behemoth Facebook ad machine appears to be at a standstill as well.