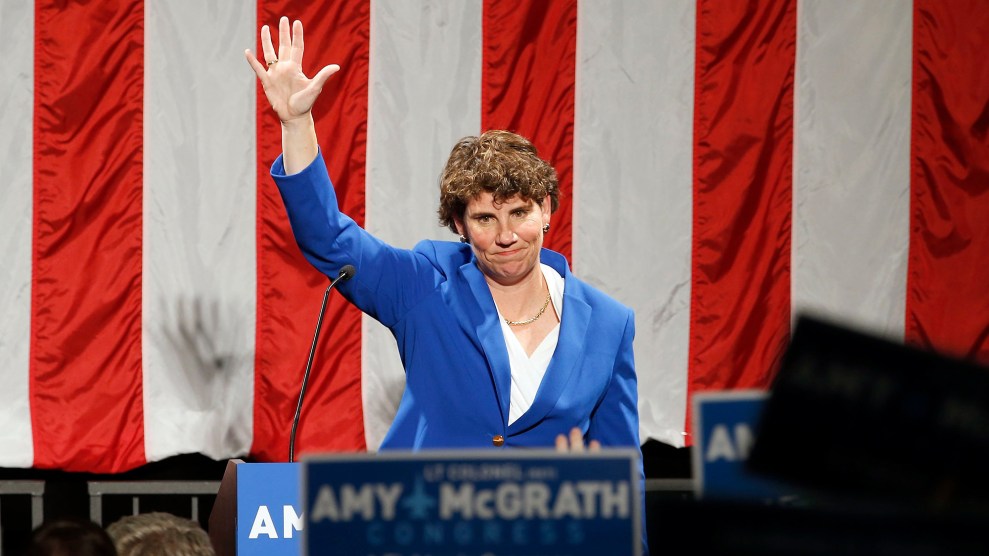 After a long primary season redefined by a pandemic and police brutality, Amy McGrath defeated her progressive challenger, Charles Booker, in the US Senate Democratic primary in Kentucky. McGrath will take on Senate Majority Leader Mitch McConnell in November.

McGrath entered the race in July as the clear frontrunner, running at the behest of Senate minority leader Chuck Schumer (D-N.Y.), who’d been recruiting the former Marine fighter pilot since her failed attempt to unseat a Republican House member in 2018. With an early endorsement from the campaign arm of the Senate Democrats and frequent advertisements on MSNBC—an easy play for the pocketbooks of liberals nationwide eager to dethrone McConnell—McGrath had amassed $41 million by June 1, even as she slow-walked her support for impeaching President Trump. She even outraised the ever deep-pocketed McConnell in several quarters.

Charles Booker raised nothing of the sort: He entered June having raised just $788,000 during the entire campaign. The young, Black, first-term state representative from Louisville announced his candidacy with little fanfare during a press conference on Capitol Hill last fall. He ran on a progressive platform that included support for Medicare for All, a Green New Deal, and universal basic income. When the primary’s originally scheduled date, May 19, rolled around, Booker seemed to stand little chance.

That was all before 26-year-old Breonna Taylor was shot to death by a police officer in her Louisville home—and before David McAtee, a local Black restauranteur was killed by police at a protest against her killing. Booker attended the protests that broke out in his hometown and often addressed the crowds. As he spoke of the cousins he lost to gun violence and his longstanding commitment to police reform, he emerged as a credible voice whose message met the moment. The attention drew a big last-minute cash haul and scores of high-profile endorsements days before the primary, including nods from Elizabeth Warren, Bernie Sanders, and Alexandria Ocasio-Cortez.

The primary results had been delayed due to the widespread use of absentee voting in the face of the pandemic— particularly in the cities of Louisville and Lexington, the state’s bluer enclaves. While McGrath had an early lead over Booker after last Tuesday’s in-person voting, Booker closed the gap as election officials tabulated mail-in ballots.

As other progressive candidates of color defeated longstanding incumbents and Democratic establishment favorites in New York’s congressional primaries last week, liberals hoped Booker could also ride the wave of national outrage to a major upset victory. Even though he didn’t, the coalition he built to nearly topple a enormously resourced opponent offers a roadmap for how progressives could make headway in deep-red states: Not by relying on moderate Democrats, but on liberal populism delivered by candidates of color who can credibly speak to systemic injustice.