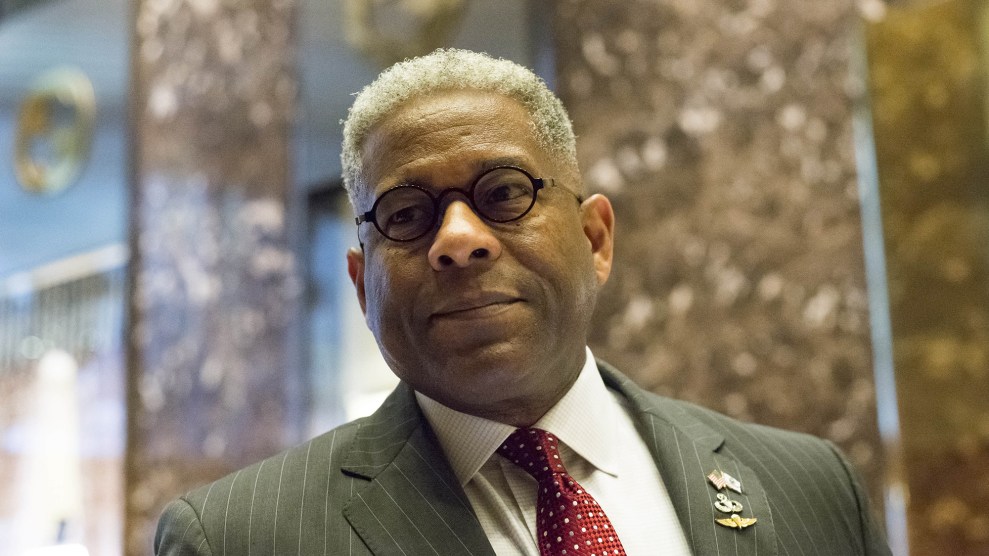 The Texas Republican Party convention, which wrapped up—for now—early Monday morning, was most notable for how it transpired. In early July, Republican leaders announced they were moving forward with an in-person gathering even as the coronavirus outbreak in the state worsened. A few days later, Houston Mayor Sylvester Turner (a Democrat) stepped in and canceled the event, arguing that it constituted a public health threat in a city fast running out of ICU beds. The state GOP sued the city. A federal judge overruled the mayor. An appeals court overruled the judge. In the end, like everything else these days, the convention was moved to Zoom.

Still, there was one bit of significant news out of the event itself: The party elected a new chair—former Rep. Allen West.

West is a holdover from a slightly earlier wave of weird Republican politics. He was discharged from the Army after firing his handgun past the head of a detainee in Iraq, and then elected to Congress in 2010, at the crest of the tea party wave, in no small part because he’d once fired his gun at a detainee. When I profiled him for the magazine, West was sort of the personification of an ascendant anti-Islam movement within the party. He stated that Islam was a dangerous political force rather than just a religion and that its values were incompatible with democracy. He believed that social welfare programs were “slavery” and that as many as 80 members of the House were secretly communists. He was personally offended by the “Coexist” symbol. He said that the modern American male had been “neutered.” “Grab your muskets,” he told supporters.

That was in 2012. That fall, he lost a seat that should have been safe (he accused the St. Lucie County elections supervisor of stealing the election, on his way out), and shortly thereafter left his rebound gig at the conservative PJ Media after this happened:

Former Congressman Allen West is leaving his job at Pajamas Media after an altercation with a female staffer in which he allegedly called her a “Jewish American princess,” BuzzFeed learned on Thursday.

I was trying to remember the last time I’d heard his name, prior to his recent quest for Texas state GOP chair. It was in 2016, when his Facebook page posted a meme celebrating Trump’s hiring of James Mattis as secretary of defense. “Fired by Obama to please the Muslims,” it said. “Hired by Trump to exterminate them.” The editor-in-chief of West’s website posted a follow-up saying that neither she nor West had published the meme. However it happened, the reality was this: While West’s own stardom had faded, his bigotry toward Muslims found a champion at the highest level of government.

And now he’s back! Fifteen-hundred miles away from his old district, at the helm of the Republican Party of the state he’s called home for five years. Allen West!

Tea party nostalgia aside, West’s new role is an ominous and familiar development for a state party that’s spent so long in power it’s forgotten what it’s like to actually have to fight for it. The nation’s largest red state is fast on the verge of becoming the nation’s largest swing state. At least a half dozen congressional seats are up for grabs in Texas. Democrats are threatening to take control of the state house of representatives. Sen. John Cornyn’s poll numbers haven’t quite collapsed, but a recent survey put Joe Biden up five points over President Trump in the state. After Beto O’Rourke and the Democratic wave drove historic midterm turnout in Texas in 2018, conservative donors launched a voter registration drive to find new Republican voters. It shuttered this spring. After decades of ever-increasing dominance, the party is finally coming face to face with its own limitations.

If the Texas Republicans were taking things seriously, some introspection might be in order as to why, for instance, a party that derived its power from the state’s sprawling suburbs was suddenly being routed in them—why young voters are running away from the GOP, why Asian American voters have abandoned the party, or why Democrats no longer fear them. Instead, the response has been retrenchment. West is not the solution to any of the problems facing the party; he’s a manifestation of the kind of belligerent, obsessive, and bigoted thinking that backed them into the corner it’s now in, with a track record of political failure and little more to his name than a high Fox News Q score. It is the logical end-game for a party so high on its own supply it tried to hold a convention in a pandemic.