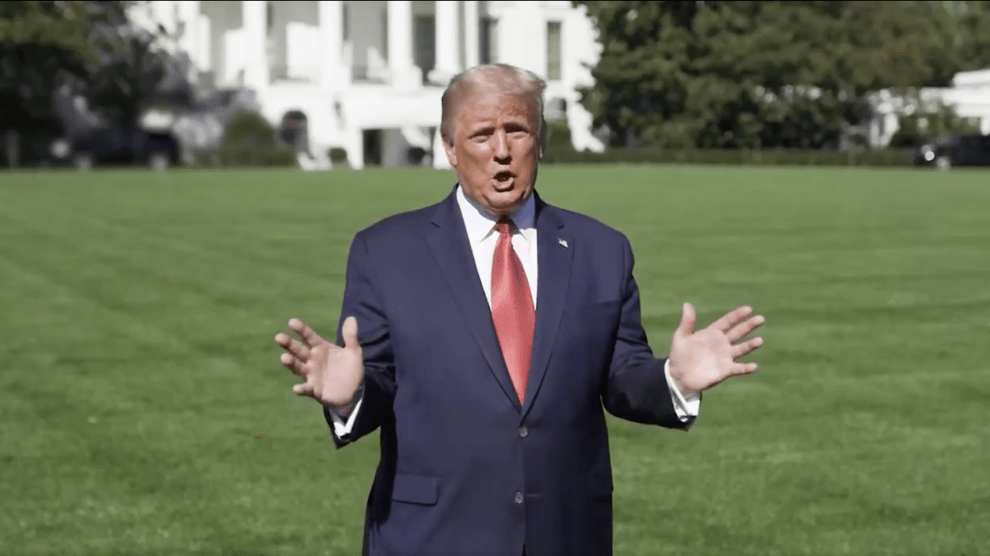 I’ve spent an inordinate amount of time today staring at this video of Donald Trump pretending that nobody knows he’s 74 years old. Never mind the totally insane content of the video—we at Mother Jones are obsessed with whether this was filmed before a green screen. What to make of the trees in the back right that seem to sway on loop? What about the orangish fleck that flutters away at 0:36?

TO MY FAVORITE PEOPLE IN THE WORLD! pic.twitter.com/38DbQtUxEu

None of us can be sure. But here are some attempts at solving the mystery:

“Let’s just say if I wanted to give something like this a fake background, I would use a depth-of-field blur exactly like that. But the biggest reason I think it’s fake is the trees move like they’re on a loop.” —Adam Vieyra, creative director

“Trust in our public institutions has been so degraded that it’s not completely out of bounds to wonder if the White House is releasing manipulated videos of the president to prove he’s in good health. Four years ago, if you’d told me these are the conspiracy theories we’d be entertaining, I would’ve laughed in your face.” —Nathalie Baptiste, reporter

“I don’t think it’s a green screen because their video team is really quite amateurish in a lot of technical ways. I don’t see them pulling off such a perfect chroma key. And also the lens blur/drop-off looks normal if they’re shooting with a mid–focal range lens, ND filters, and a semi-open aperture.” —Mark Helenowski, digital producer

“If they can fake a moon-landing, they can definitely fake an infomercial for seniors. Just kidding! I don’t think they faked this—you can see his hair moving with the breeze.” —Tim Murphy, senior reporter

I think it's pretty clearly a green screen. The sharpness of the outline and the lighting. Also it's a very long way to bring a sick president to shoot something when you have the Rose Gardenl. https://t.co/bBZyb2m0Fs

Why the digital background? It's a sunny day in DC. This could have been filmed on the actual White House lawn. https://t.co/KicIHOhDVJ

As someone who thought the video looked bizarre and artificial, I appreciate this explanation for why that was. https://t.co/SxI9dkKQFb

Green screen or no green screen? You be the judge.