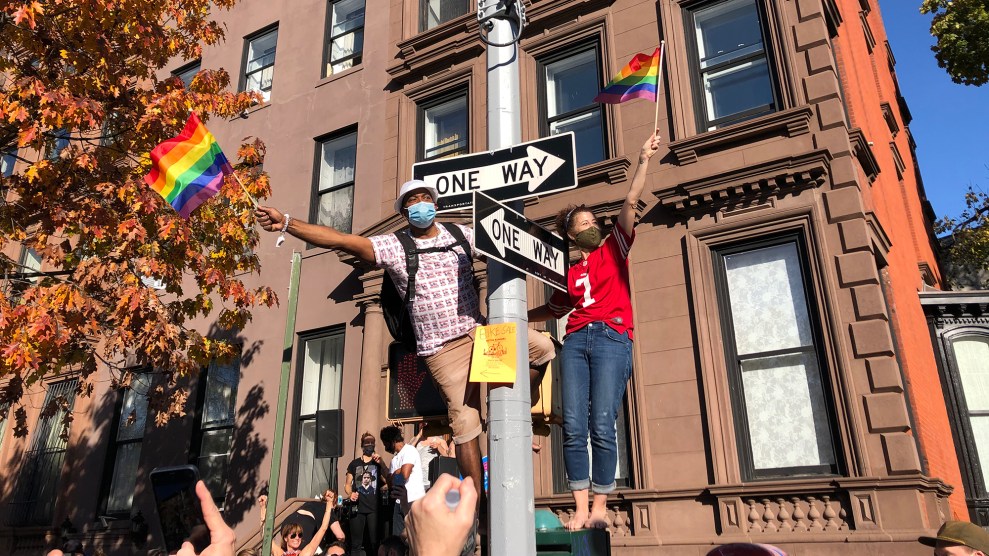 The news of President Trump’s defeat rippled through the streets of Brooklyn on Saturday, to the tune of clanging pans, honking horns, and shouts of joy. A woman sprinted down my sleepy street in Crown Heights and screamed, “Biden won Pennsylvania!” A child on the sidewalk started chanting, “Go Biden!” The barista at the local coffee shop took the gay pride and Black Lives Matter flags down from the storefront, hopped on her motorcycle, and circled the block, the rainbow and black banners flapping in the wind behind her.

On one corner right outside Fort Greene Park in Clinton Hill, the ambient jubilance erupted into a full-fledged open-air dance party. Eric Holt, 40, lives in a brownstone building across the street from the weekly farmer’s market on the east side of Fort Greene Park. Holt, a professional DJ with experience throwing parties, heard yelling outside his house this morning. When Holt learned that Joe Biden had won Pennsylvania, he had one first thought: get the music playing.

“I called [my friend] in Bushwick and said, ‘We need to get this going right away,'” Holt said. Pretty soon, he had two giant speakers and a professional DJ controller set up on his stoop, blasting dance music. A crowd of people spilled out into the street outside Holt’s house, where they started dancing, spraying bottles of champagne, waving flags, and chanting, “Na na na nah, hey hey hey, goodbye.”

Ryan Seeram, 32, had just started his Saturday morning bike ride when he heard the news. He only made it a quarter of a mile before he started hearing people screaming. “I just lost it,” he said. He made his way to the intersection outside of Holt’s house and started dancing like crazy. Someone handed him a Biden-Harris sign, which he started waving over his head. “We are about to move into a whole new world,” he said. “We have the first Black Asian woman as vice president. I am someone who’s Black and Indian. This means so much to me.”

Tracee Loran stood to the side of the party wearing a white sweatshirt with the words “unity over division” emblazoned in blue across the front. “It feels like a new day,” she said, noting that a lot of work lies ahead. She thinks it’s going to be hard for the country to come back together after four years of Trump’s presidency. But she thinks that Biden’s win is the first step. “We had to get rid of that guy [Trump] first, then we can pick up the pieces.”

Madaline Klosterman, 57, came to the party waving a huge American flag over her head. “It’s our country, and people who support the Republican Party don’t own the American flag,” she said. “I feel like I can breathe again.”

By 2:30 p.m. the party was still going strong, which is exactly what Eric Holt had in mind. “Nothing gets it going like music,” he said. “We can keep this going for a long time.”