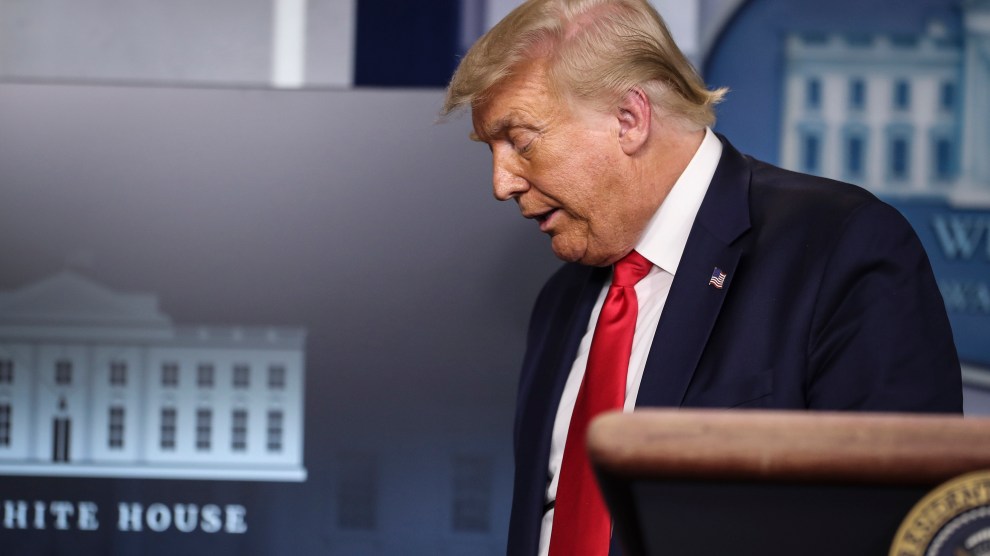 President Donald Trump walks away from the podium after a press briefing in July. Oliver Contreras/CNP via ZUMA Wire

For weeks, President Donald Trump has repeated again and again, falsely, that he won the election, and that Joe Biden has only been named the president-elect because of widespread voter fraud and media bias. On a call with G-20 world leaders on Saturday, Trump even said he looked forward to working with the group for a long time, suggesting once more that he doesn’t expect to leave the Oval Office anytime soon.

But privately, according to a report by the Washington Post, close aides to the president say that Trump is talking about his plans for life after the White House, in a nod to the reality that Biden will be inaugurated come January. These private conversations are happening as courts continue to shut down Trump’s Hail-Mary attempts to overturn losses in key states like Georgia and Michigan. On Saturday, a Republican judge dismissed a lawsuit that sought to prevent election officials from certifying Biden’s win in Pennsylvania.

A judge wrote that he would not allow Trump’s campaign to use “strained legal arguments without merit” to throw out votes in Pennsylvania.

There are rumbling among his confidantes that the truth is catching up to Trump. In meetings and phone conversations with close aides, according to the Post, Trump has been mulling how he might remain a powerful figure in politics, including by running for president again in 2024, setting up a rematch with Biden. One adviser, who spoke to the newspaper on condition of anonymity, said Trump told him he planned to announce another presidential campaign in three weeks, in a bid to discourage other Republicans from preparing to throw their hat in the ring for that race.

But other advisers said Trump hasn’t made a final decision yet about what comes next, and that, in typical fashion, his plans are always changing. They said he’s considering other ways to profit financially outside the White House, like by giving paid speeches to business groups or charging for admission to political rallies. Aides said speaking at these rallies was one of his favorite part of being president, and that he enjoyed the energy of the crowds.

Rather than returning to New York, Trump will probably head first to Florida, where he likes to spend time in the winter at his Mar-a-Lago Club, according to the Post. During his presidency, he switched his voter registration to Palm Beach. And people close to Trump told the newspaper he will also focus more on his businesses that have seen falling revenues.

Publicly, of course, Trump shows no signs of conceding to Biden, even in the face of losses in court. On Saturday, US District Judge Matthew W. Brann, a Republican former Federalist Society member appointed by Barack Obama, wrote in a scathing opinion that he would not allow Trump’s campaign to use “strained legal arguments without merit” to throw out votes in Pennsylvania. “In the United States of America, this cannot justify the disenfranchisement of a single voter, let alone all the voters of its sixth most populated state,” Brann wrote. Trump’s attorney Rudy Giuliani and a legal adviser said they would appeal. And early Sunday, Trump took to Twitter, in his usual fashion, to try to convince his supporters he’s unfazed.