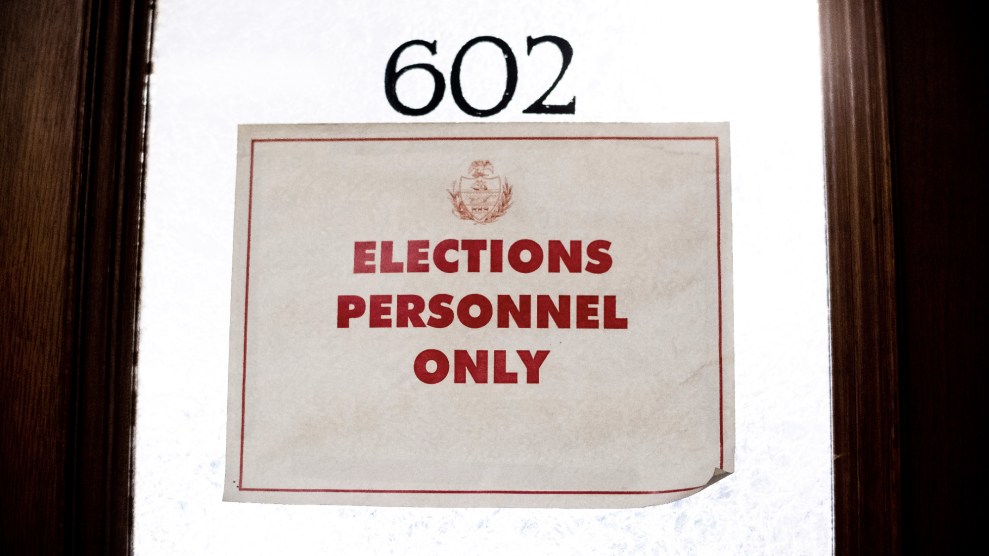 Pennsylvania voters have been returning mail ballots to county boards of elections since mid-September, where, by law, they have had to sit uncounted.

On Tuesday morning, just after 7 a.m., officials finally began tabulating Allegheny County’s approximately 341,000 already returned ballots. Envelopes from voters in Pittsburgh and surrounding communities had been kept inside a chain-link cage. Now, as the whir of an envelope-opening machine cut through masked chatter, workers in florescent shirts shuttled them around the brick-and-cinderblock warehouse to be processed and counted.

Delayed counts will bolster any attempt by Trump to claim a false victory.

The county has lined up 600 workers, split across three shifts, to tackle the challenge. After a little more than an hour of work this morning, Amie Downs, the county’s communications director, said a quarter of the ballots had left the cage to begin the process, 13,000 of which had been removed from their envelopes.

She had no estimate for when they would finish. That question, hanging over counties across this vital swing state, is one of the most important remaining in the 2020 election.

While most states with robust absentee balloting allow votes to be opened or counted on receipt, Pennsylvania, which is deploying the system for the first time in a general election, does not. No such mechanism was included when the state expanded mail voting in late 2019 on a bipartisan basis.

At the time, no one foresaw that a global pandemic would push millions of Pennsylvanians to vote by absentee ballot. As that became clear, local county officials charged with election administration pushed for a fix to the bill that would allow them to get a head start counting the deluge. The Republicans who control the state legislature responded by including the measure in a package that would have eliminated ballot drop boxes and otherwise made it more difficult to vote by mail. Democrats balked, and the delaying rule remained in place, blocking any counting before Election Day.

The predictable consequence? Full tallies of votes cast in person will be available before the mail votes. With the bulk of mail voters expected to be Biden-leaning, the dynamic will bolster any attempt by Trump to claim a false victory on Tuesday night, before hundreds of thousands of votes are included. While Allegheny and Philadelphia counties, home to major numbers of Democratic voters, are rushing through Election Day to count all their mail ballots, seven counties elsewhere in the state will not begin counting them until Wednesday morning.

In a close race, it could be many days before Pennsylvania’s outcome is known, and voters should prepare for the apparent leader to change as different pools of votes are included in partial results. Indeed, Downs expects Allegheny County will release results of the mail ballots it has managed to count promptly at 8 p.m.—perhaps a half hour or more before results from polling machines in the field arrive at reporting centers.

That won’t be the end of it, and the county is prepared to go days longer. In addition to finishing counting the 341,000 ballots already in hand, the team will field any others that arrive by 8 p.m. on Election Day and, under a ruling of Pennsylvania’s Supreme Court, up to several day later. Downs says workers will count around the clock “as long as it takes.” Which, in the event that the election comes down to Pennsylvania, could be how long Americans will need to wait to know their next president.