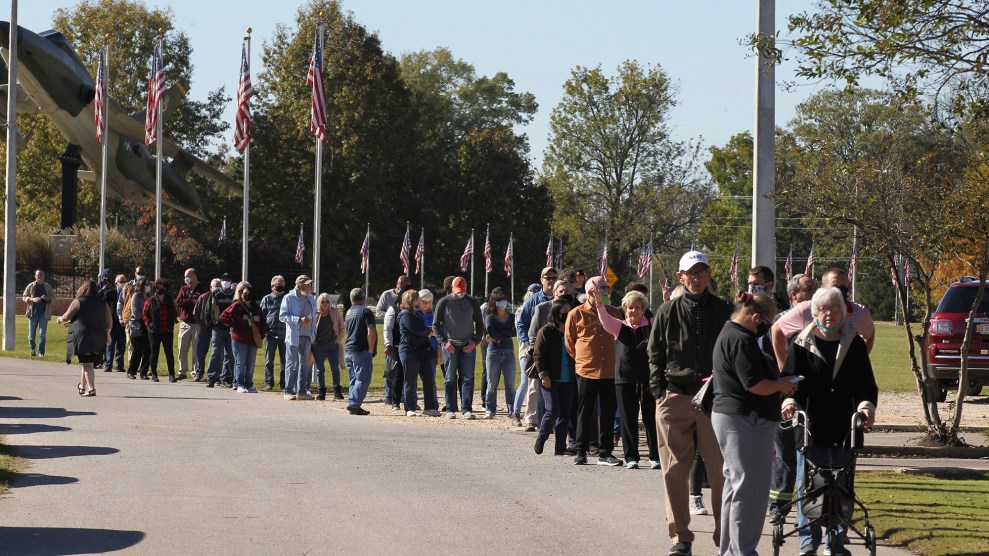 Mississippi voters overwhelmingly supported a ballot initiative on Tuesday to dismantle a Jim Crow–era constitutional provision that was created to preserve white political power in the state.

The constitutional amendment required candidates seeking statewide office to win the popular vote, in addition to a majority of Mississippi’s 122 state House districts. It was created in 1890 at a constitutional convention that was convened with the goal of disenfranchising Black voters. Several Jim Crow provisions were added to the state’s constitution that year, including literacy tests, a poll tax, and separate-but-equal school districts.

As Mississippi Today points out, although these provisions remained in the state’s constitution, they had all been found unconstitutional by federal law, and were therefore nullified—except for the election requirement, which was arguably more subtle and therefore survived the evolution of federal discrimination law. Still, its white supremacist intentions were never actually hidden. The election provision received vocal support from state Rep. James K. Vardaman in 1890, who was elected on his white supremacist beliefs and was known as the “Great White Hope” in Mississippi. In praise of the convention, he said: “There is no use to equivocate or lie about the matter. Mississippi’s constitutional convention of 1890 was held for no other purpose than to eliminate the nigger from politics—not the ignorant and vicious, as some apologists would have you believe, but the nigger. Let the world know it just as it is…. In Mississippi, we have in our constitution legislated against the racial peculiarities of the Negro…. When that device fails, we will resort to something else.”

Over the past several years, the provision has gotten more attention. It came up in national conversation in 2018, when Mike Espy, a Black man, first challenged Cindy Hyde-Smith for retiring Sen. Thad Cochran’s seat. It came up again last year when then-Attorney General Jim Hood, a Democrat, ran against then-Lt. Gov. Tate Reeves, for governor. During the campaign, the National Democratic Redistricting Committee, an organization led by Eric Holder, the first Black attorney general, backed a lawsuit to challenge the provision filed by four Black Mississippi voters. “This racist electoral scheme achieved, and continues to achieve, the framers’ goals by tying the statewide election process to the power structure of the House,” the lawsuit stated. “So long as white Mississippians controlled the House, they would also control the elections of statewide officials.” The lawsuit failed, though the courts signaled that they may step in should the race require a state House vote, and Reeves won the governorship. Even though the last race that triggered a vote in the state House was in 1999, the provision remained a stain on Mississippi’s democracy—until last night, as a whopping 78 percent of voters eliminated the provision for good.