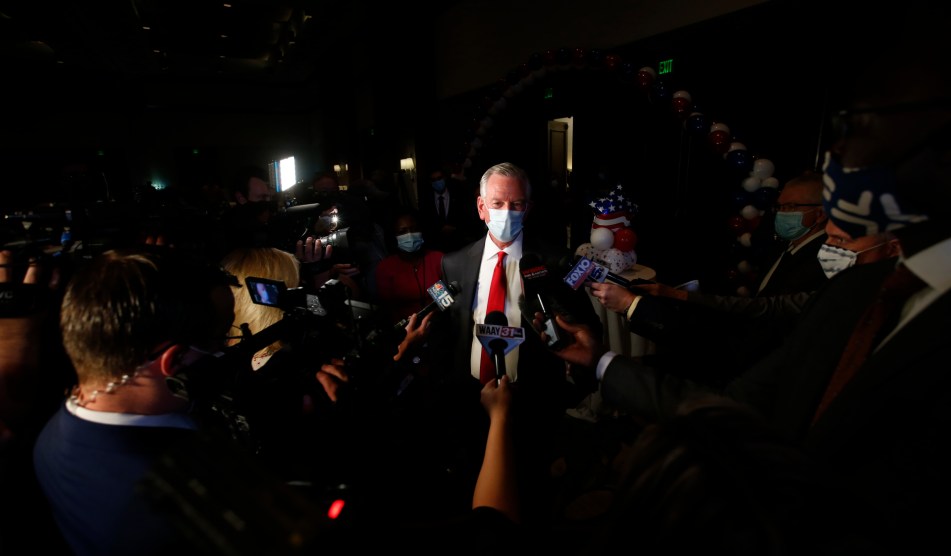 Of the names associated with this year’s Senate race in Alabama, you might have heard the winner’s the least: Tommy Tuberville.

The race was supposed to be about the resurgence of Jeff Sessions—who went from longtime racist Senator to short-time racist United States Attorney General to very short-time racist 2020 Senator candidate. It was supposed to be about Senator Doug Jones, the one Democrat to win in Alabama in ages (a miracle!), who vanquished former Alabama Supreme Court Justice Roy Moore in a 2017 special election after Moore was accused of sexually assaulting minors.

But in the end, it was Tuberville. He beat Sessions in the primary and cruised past Jones in the general election.

Tuberville describes himself in a bundle of C’s: “christian,” “conservative,” “coach.” He became a household name in the state as the head coach of the Auburn football team. As I’ve written before, college football coaches are monumental figures in the South, and especially in Alabama. (Legend goes that Gov. George Wallace called the University of Alabama’s then-coach, Bear Byrant, regularly because he feared having to run against him.) But Tuberville is not nearly so widely-loved as Bryant was (even by some of his former players).

Still, his prominence as head coach lead him into the folksy world of local talk sports radio, where he showed a flair for speculating on birtherism, hating abortion, and praising Trump as a gift from God.

Jones’s re-election was always going to be an uphill battle. Trump easily won Alabama in 2018, by 27 points. The question was mainly the primary. During that campaign, Tuberville and others Republicans made a job of sucking up to Donald Trump. The hope was, as the New York Times Magazine wrote, that whoever got the endorsement from the president would ride to an easy victory. Sessions’ track record of not doing the president’s bidding during the Russian probe set him way back. Tuberville, a man with a history of being duped by financial Ponzi schemes, won Trump’s endorsement instead. From there, it was basically over.

Jones seemed to largely know where he was headed. According to a New York Times interview before the election, the complete unlikelihood of another victory allowed Jones to shed the timid Blue Dog tactics of Southerner Democrats of the past during this campaign. Instead of trying to appease white moderates by soft-pedaling the racism of his opponents, he directly addressed the Black voters that placed him in office. His first ad featured him speaking about racism after the death of George Floyd; he said “Black Lives Matter” on the Senate floor.