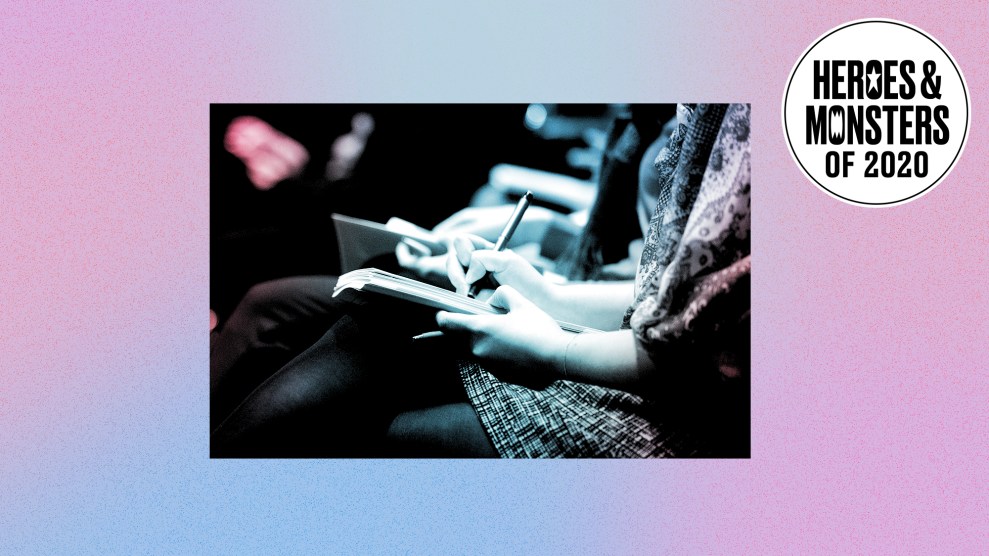 It was a Tuesday night in mid-November, and, like many Americans, I was staring at my phone in disbelief. Two Republicans on the board of canvassers in Wayne County, Michigan, had just refused to certify the county’s election results, potentially disenfranchising more than 870,000 voters in Detroit and surrounding communities. Donald Trump’s lawyer, Jenna Ellis, immediately started crowing that this could be the first step in undoing Joe Biden’s victory. “If the state board follows suit,” she tweeted, “the Republican state legislator [sic] will select the electors.”

Journalists in a half dozen swing states have become social media celebrities, using their expertise in local politics to explain just what the hell is going on.

Everything about this was shocking: the racism of two white officials attempting to reject the votes of a heavily Black city; the arrogance of political functionaries using their obscure powers to derail a democratic election; the realization that Ellis might actually be right—that perhaps no firm guard rails could be counted on to stop Republicans from stealing the presidency. One of Wayne County’s GOP board members, Monica Palmer, insisted she was simply trying to shine a light on small discrepancies in voting records—not overturn the election. But scrolling through Twitter that night, there was a palpable sense of fear, outrage, and despair. Above all, there was confusion: Could the Republicans really do that? What was going to happen now?

What happened next was even more shocking. Facing a massive backlash from Wayne County voters—many of whom had called into the meeting to voice their outrage—the Republicans caved. Hours after voting against certification, they agreed to a last-minute compromise hammered out by Jonathan Kinloch, a Democratic board member.

The news was broken at 9:08 p.m. ET by Kayla Ruble, a Detroit-based freelance reporter who was tweeting from inside the meeting that night.

In a late night twist, the Wayne County Board of Canvassers unanimously agrees to certify the results, on the condition Secretary of State’s office conduct a comprehensive audit of the unexplained, out of balance precincts across the county

Ruble, who was covering the meeting for the Washington Post, was one of the few journalists in the room that night. A source had tipped her off a week earlier that the Republican Party might try to use the canvassing process to block certification of the vote in Wayne County and other Democratic strongholds. “I had a sense that it might not pass,” Ruble told me. She scouted the site in advance of the meeting and showed up early to make sure she got a seat. That made a difference, since most reporters were ultimately turned away. The meeting was livestreamed, but the stream was muted at the crucial moment when the GOP canvassers reversed course. So the world learned the news from Ruble’s tweet, which immediately went viral—6,400 retweets, as of this writing. If you weren’t glued to the internet at that moment, it’s hard to describe just how suddenly the mood on Twitter changed. (The mood shifted again a day later, when the Republicans changed their minds for a second time and tried, unsuccessfully, to rescind their certification votes.)

Ruble says she had no idea how many people across the country were following the Wayne County news until later that night after she’d filed her story. “I will never [send a] tweet about a government meeting again that will get that many retweets and likes,” she says. “That was the craziest thing.”

If you are like me, you’ve experienced a version of that night nearly every day since November 3—an endless fugue of anxiety driven by one GOP plot after another to weaponize arcane local rules and legal theories we’ve never heard of, much less understand, to upend the entire election. Canvassing boards in Michigan. Boards of supervisors in Arizona. Recounts. Lawsuits seeking to throw out hundreds of thousands of votes. And an all-out campaign to persuade Republican-controlled state legislatures to somehow overrule the will of their constituents and cast their states’ electoral votes for Trump. Every day there is a new scheme that reignites our panic and sends us racing to Google and Twitter, trying to figure out if this is the scenario that will end democracy as we know it. Can the Republicans really do that? What is going to happen now?

Fortunately for us, Ruble isn’t alone. Despite the carnage that has hit local newsrooms in recent years, America is still full of deeply sourced reporters. In the past two months, journalists in a half dozen swing states have become social media celebrities, using their expertise in local politics, courts, and bureaucracy to explain just what the hell is going on. They’ve covered every new batch of recounted ballots, followed the twists and turns of every lawsuit, and detailed every GOP effort to overturn the results. They’ve debunked insane conspiracy theory after insane conspiracy theory—even the ones in which they’ve played a starring role:

A conservative “news” site reports catching a man wheeling in “suspicious” equipment to the Detroit convention center, implying it was used to steal ballots.

The “ballot thief” was my photographer. He was bringing down equipment for our 12-hour shift. https://t.co/4UsRdOncZ3

In a time of unprecedented confusion and disinformation, it’s impossible to overstate the public service that these journalists have provided. There are far too many to name here, but I want to mention just a few from the three states with the closest vote counts. In Arizona, there’s ABC15’s Garrett Archer, a former election official-turned-data-analyst who, for 10 stomach-churning days, broke down each newly counted batch of votes as Joe Biden’s lead in the state steadily dropped.

Maricopa has completed the 2020 General Election.

Take a bow. You earned it.

In Georgia, there’s Robin Kemp—founder of the nonprofit news site, the Clayton Crescent—who, as my colleague Laura Thompson reported, spent nearly 24 hours chronicling the vote-counting in Clayton County, as Biden overtook Trump in what was once a deep-red state.

There’s Brendan Keefe—the chief investigator for Atlanta’s WXIA 11Alive—who debunked, among other things, claims by the Trump campaign and Fox News that numerous ballots had been cast in the name of dead voters. His interview with the very-much-alive Agnes Blalock is worth your time:

President Trump's campaign accused four Georgia voters of fraud. Said they voted 'dead' in the presidential election. We tracked two of them down, alive & well. We simply knocked on a door and 96-year-old Mrs. James Blalock answered. @11AliveNews https://t.co/n9dLA70jJB pic.twitter.com/10cbPJTXB0

And there’s Nicole Carr, an investigative reporter at Atlanta’s WSB-TV who exposed a potentially illegal voting scheme allegedly concocted by a Republican attorney. (The attorney has claimed he was simply making “humorous comments.”)

“If that means changing your address for the next two months,so be it.I’m doing that. I’m moving to Georgia.”Our 6 investigation reveals deleted video-a FL attorney telling GOP members how to move to GA,vote in runoffs. It’s illegal.There’s more,& an investigation @wsbtv #gapol pic.twitter.com/or2PgWQrT1

Finally, in Wisconsin, the Milwaukee Journal Sentinel’s Patrick Marley composed the single most heart-pounding Twitter thread I’ve read, as he chronicled a state judge’s ruling in the Trump campaign’s efforts to overturn the election results by invalidating more than 200,000 ballots in heavily Democratic Milwaukee and Dane counties.

Simanek notes voting at the polls is a guaranteed right but voting absentee is a privilege.

Simanek rules against Trump — says the state's certification of the vote for Biden was correct.

The 2020 election saga isn’t quite over yet. Some GOP lawsuits are still working their way through the courts. In Georgia, the Republican secretary of state just completed an audit of mail-in ballot signatures that had been demanded by Trump. In Arizona, Republican lawmakers are suing Maricopa County in an effort to subpoena images of ballots. And I’m still looking at Twitter dozens of times a day, desperately trying to understand each new crisis. The remarkable thing, amid all the chaos, is that more often than not, a professional journalist is already providing the answers. “There’s so much talk about the decimation of local news, and it has been,” Ruble says. “But it’s so much more robust than we give it credit for.”