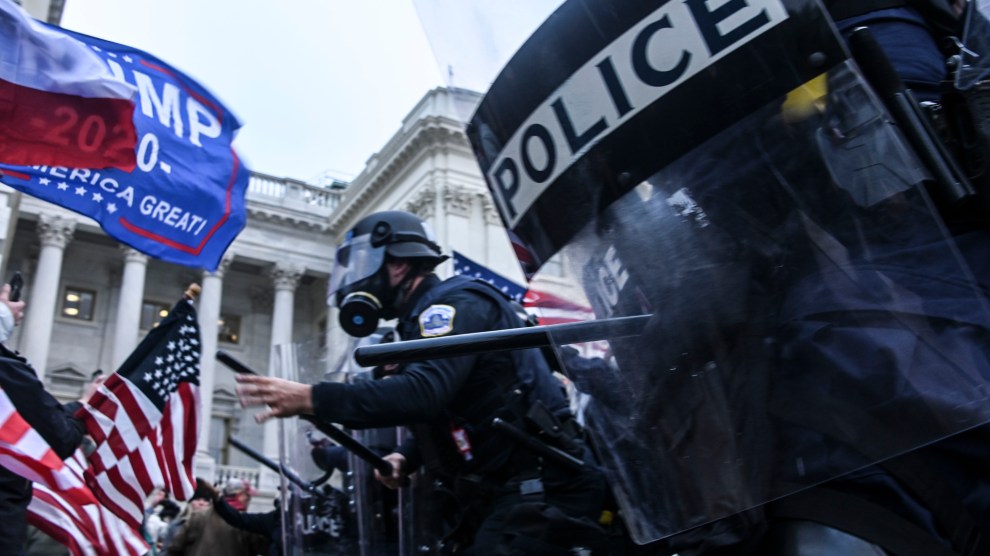 After a violent mob of Trump supporters broke into the US Capitol on Wednesday in a failed bid to stop lawmakers from certifying the presidential election results, police unions around the country are in an awkward situation. Many of the biggest law enforcement unions endorsed Donald Trump last year, and one union leader even got in trouble for selling “Cops for Trump” T-shirts. But dozens of officers were injured in the insurrection at the Capitol. And the Capitol Police are now under fire by politicians for their relatively tepid response to the mob, after they arrested far fewer Trump supporters and used magnitudes less force than police officers did during many Black Lives Matter protests this summer.

So, how have law enforcement unions and their mostly white bosses responded? Official reactions to the Capitol mob have run the gamut, from expressing genuine support for the insurrectionists to condemning their violence, to using the chaos as yet an opportunity to oppose the Black Lives Matter movement. Some unions have stayed quiet.

On Wednesday, the Fraternal Order of Police, one of the country’s largest police unions, which endorsed Trump in the election, called on the president to “forcefully urge” his supporters to stand down, describing the riots as unlawful. But the next day, Chicago’s FOP chapter president, John Catanzara, made headlines when he candidly told reporters that he sympathized with the insurrectionists’ angst, and that he also believed President-elect Joe Biden stole the election. “Do I get why people showed up there? Absolutely. Do I agree with their frustration? I share it 100 percent,” Catanzara told local broadcast station WGN.

Catanzara reportedly keeps a Trump flag on his desk and owns a framed picture of a presidential tweet praising him. He was reprimanded in 2017 for posting photos on social media of himself in uniform carrying a sign in support of Trump. Speaking Thursday about the mob in Washington, he added that he didn’t agree with their tactics, and that he believed Trump should take some responsibility for instigating the violence. But Cantazara downplayed the seriousness of the insurrection. “If the worst crime here is trespassing, so be it. But to call these people treasonous is beyond ridiculous and ignorant,” he told WBEZ, a local radio station.

Other police union chiefs have also expressed admiration for Trump, who throughout his campaign presented himself as the candidate of law and order. Last year, I reported on Bob Kroll of the Minneapolis police union, who helped sell the “Cops for Trump” shirts and went onstage with the president at a political rally. In a 2007 lawsuit alleging racism in the Minneapolis police department, Kroll was accused of wearing a motorcycle jacket with a “White Power” patch, an allegation that he has since denied. This week, his union has stayed relatively quiet about the events at the US Capitol.

Many cops are using the chaos in Washington as yet another opportunity to criticize the Black Lives Matter movement.

But many cops are using the chaos in Washington as yet another opportunity to criticize the Black Lives Matter movement to hold police accountable. The National Association of Police Organizations, a coalition of police unions and associations representing more than 241,000 law enforcement officers, pointed their finger at politicians and activists who have tried to prevent cops from using rubber bullets, tear gas, and other weapons at protests, particularly after so many Black Lives Matter activists were seriously injured by officers over the summer.

“In cities across the country, the dissatisfaction with police response to sometimes violent protests during the summer have led to the deliberate disengagement or ‘standing down’ of officers and the banning of vital de-escalation tools,” the NAPO wrote in a statement on Thursday. “The great harm here is that officers are sometimes placed in a situation where, having been stripped of legitimate less-forceful means of maintaining and restoring order, they find themselves approaching a situation where they are forced to choose between no force at all and deadly force, because the intermediate use-of-force tools have been restricted or prohibited. This situation clearly risks great harm, destruction and even death, that might otherwise have been prevented.”

Meanwhile in Washington, the union representing the US Capitol Police appears to be pissed about how Wednesday unfolded, and they’re blaming their leaders at the police department. In a statement, Gus Papathanasiou, who is president of the union, called on the department’s police chief to resign, saying that a lack of planning left too many officers exposed to violence and chaos. “Our officers did their jobs. Our leadership did not,” he wrote. “We have several protesters dead, multiple officers injured and the symbol of our Democracy, the US Capitol, desecrated. This never should have happened.”