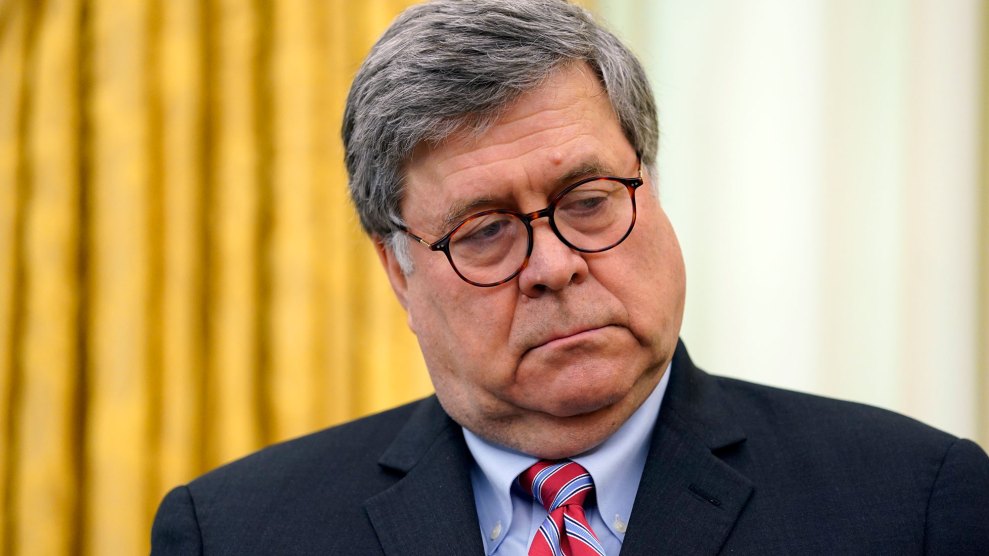 On CBS’s Face the Nation on Sunday, Attorney General William Barr acknowledged that though racism exists, he doesn’t think the criminal justice system that disproportionately arrests, imprisons, and kills Black people is racist. “I think there’s racism in the United States still but I don’t think that the law enforcement system is systemically racist,” he said. Barr continued, “I think we have to recognize that for most of our history, our institutions were explicitly racist.” But in the past half century, he said, “we’ve been in a phase of reforming our institutions and making sure that they’re in sync with our laws.”

“But I don't think that the law enforcement system is systemically racist. https://t.co/dq311AV3bv pic.twitter.com/H2W54re4tt

Barr was echoing the well-worn refrain that police brutality is the result not of systemic racism but rather of the actions of a few bad cops who give law enforcement a bad name. Last week, on CNN’s State of the Union, national security adviser Robert O’Brien told Jake Tapper that he didn’t think there was systemic racism and that “99.9 percent of our law enforcement officers are great Americans,” noting that many are Black and Latinx. Barr cited the US military as an example of racial progress. Once a “explicitly racist institution,” the military is now “in the vanguard of bringing the races together and providing equal opportunity,” Barr told CBS’s Margaret Brennan. “I think law enforcement has been going through the same process.”

These arguments conflate racial diversity with the end of disparate outcomes that reflect systemic racism. And Barr’s claim that institutional racism is something of the past provides cover for overlooking the many examples of how police treat African Americans differently. In Ferguson, Missouri, where Mike Brown was killed by a white police officer in 2014, 95 percent of those who were arrested for jaywalking were Black, even as they represented just 67 of the city’s population. Or in Baltimore, where the Justice Department found in August 2016, that “racially disparate impact is present at every stage of [Baltimore Police Department’s] enforcement actions, from the initial decision to stop individuals on Baltimore streets to searches, arrests, and uses of force.” Or in Minneapolis, where George Floyd was killed, Black people account for 20 percent of the city’s population but 60 percent of those beaten by police.

Barr’s insistence that police departments are being reformed is belied by the Justice Department’s own policies. When President Trump installed former Alabama Sen. Jeff Sessions as attorney general in 2017, work on consent federal decrees meant to reform problematic police departments halted. Sessions argued against an April 2017 consent decree in Baltimore and warned that “some provisions of this decree will reduce the lawful powers of the police department and result in a less safe city.”

When Trump finally fired Sessions in November 2018, the outgoing attorney general had one final trick up his sleeve. Before leaving the Justice Department, he quietly signed a memorandum in one of his last official acts all but ending the department’s oversight of police departments. The memorandum made the Trump administration’s de facto policy against new consent decrees official, while extending the same hands-off policy to other areas of federal enforcement involving state responsibilities in areas like pollution and voting rights. Experts predicted that even departments already under current federal oversight might once again act with impunity because the memo undercut the authority of civil rights attorneys to enforce them. Sessions’ memo set policy, but it also sent a message to police departments that they would no longer have to answer to the federal government—not even when when officer shootings draw national attention.

This message was sent not just in the order to pare back enforcement, but in the states’ rights language framing the 7-page document that has historically signaled support for state repression over the rights of black people. “Sessions’ memo also takes pains to emphasize that states are ‘sovereign’ with ‘special and protected roles’ and that, when investigating them, the Justice Department must afford states the ‘respect and comity deserving of a separate sovereign,’” Christy Lopez, who oversaw investigations by the department into local police agencies during the Obama administration, wrote at the time the memo was issued. “In his view, the Justice Department should be more concerned about protecting states from the burden of abiding by federal law than about protecting individuals from being hurt or killed by the state.”

On Sunday, Barr doubled down on the narrative that police brutality is the result of a few bad apples. When asked about whether qualified immunity, the legal doctrine that protects officers from civil lawsuits, should be tweaked, Barr told Brennan that reduced immunity would result in “police pulling back”—a callback to the concerns that Sessions raised in Baltimore. “There are instances of bad cops,” Barr said. “And I think we have to be careful about automatically assuming that the actions of an individual necessarily mean that their organization is rotten.”