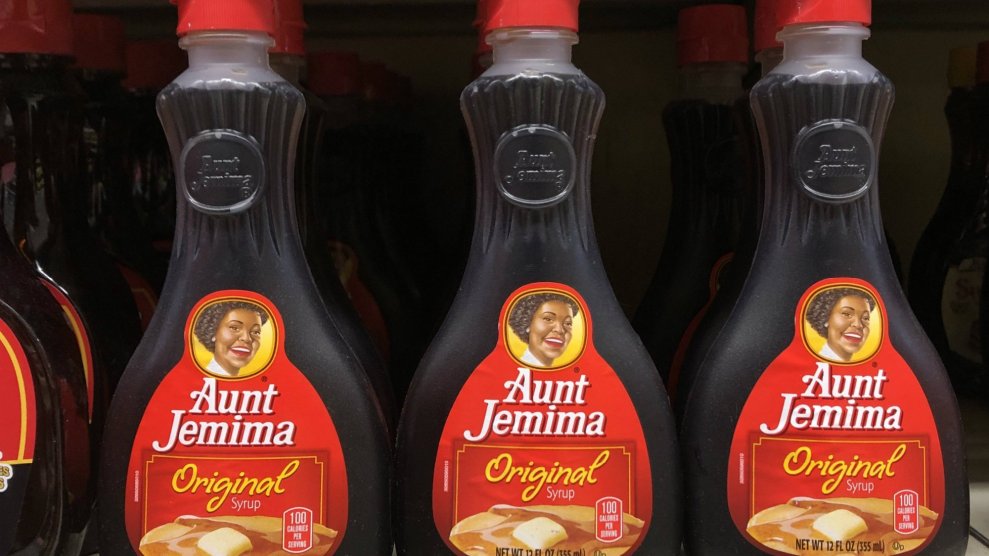 Last Tuesday, at a Students for Trump rally in Phoenix, Arizona, a Turning Point USA ambassador explained the ultimate significance of Aunt Jemima. “She was the picture of the American dream,” Reagan Escudé told the crowd, referring to Quaker Oats’ decision to retire the brand logo that is based off a racist stereotype of a “mammy,” an always cheerful subservient Black woman as cook, just waiting to serve. “She was a freed slave who went on to be the face of the pancake syrup that we love, and we have in our pantries today. She fought for equality, and now the leftist mob is trying to erase her legacy.”

First let’s fact check a little history here. In 1889, Chris Rutt, heard the song Old Aunt Jemima at a minstrel show and decided to name his pancake flour after the song. In 1893, after Rutt sold the company, the new owner hired Nancy Green, a former slave who was working as a cook for a judge, to act as Aunt Jemima and sell the pancake flour. Escudé was likely referring to the misinformation that Nancy Green, the woman whose likeness Aunt Jemima is based off of, died a millionaire. There is no evidence of that. What’s important here is that the Aunt Jemima pancake and syrup image is based off a racist trope that depicted Black women as docile and happy to serve their white owners. It has gone from an offensive 130-year-old brand logo to American heroine in a matter of days. But not without a few other racist detours on the way.

“She was a freed slave who went on to be the face of the pancake syrup that we love, and we have in our pantries today. She fought for equality, and now the leftist mob is trying to erase her legacy.”

As part of the racial reckoning that is occurring in so many industries and sectors of society, everything from brands to bands are being renamed and rebranded. Schools named after confederate soldiers will get new names. The country music sensation The Dixie Chicks will now simply be known as The Chicks. Mars, the company that owns Uncle Ben’s rice has also vowed to change its logo, who’s gently smiling elderly Black man has long been criticized as a racial stereotype. And despite the president’s threats to jail protesters, they’re toppling statues to racist men across the country.

For some, these changes are long overdue and may even feel a little hollow, not to mention opportunistic. Did you just now notice your band name referred to states that had seceded from the United States to fight a war in order to preserve slavery? But for white conservatives, the racial reckoning has exposed their own brand: Denying America’s racist foundations while fighting like hell to preserve them.

The rush to transform Aunt Jemima and Uncle Ben from racist logos that should be removed to historical legacies that ought to be honored started last week. That’s when Quaker Oats announced they would be retiring the smiling logo and looking for a new name to accompany syrups and pancake mixes on grocery shelves across the country. “We recognize Aunt Jemima’s origins are based on a racial stereotype,” Kristin Kroepfl, vice president and chief marketing officer of Quaker Foods North America, said. “As we work to make progress toward racial equality through several initiatives, we also must take a hard look at our portfolio of brands and ensure they reflect our values and meet our consumers’ expectations.”

The subsequent social media meltdown was unintentionally hilarious, at least at first.

Social media lit up with the demise of Aunt Jemima. How could the company remove the face of someone who is so important to, get this, the Black community! The character serves as a role model to children everywhere, and removing her is actually the real racism!

In fact, the image of Aunt Jemima has provided a convenient shorthand for all kinds of racists over the years. A quick Twitter search for “Aunt Jemima” and the name of any prominent Black woman, like Rep. Maxine Waters (D-Calif.) or Stacey Abrams, reveals that it wasn’t that long ago that conservative white people were using the logo as an insult and not as a sign of affection, much less respect.

It wasn’t that long ago that conservative white people were using the logo as an insult and not as a sign of affection, much less respect.

It’s also worth noting that the same phenomenon occurred when the butter company Land O’Lakes recently removed the image of a Native American woman from its packages. Conservatives, who once parroted their president and used Pocahontas as a slur for Sen. Elizabeth Warren (D-Mass.), were now claiming Land O’ Lakes was the real perpetrator of injustice for changing this racist logo. I guess I can’t expect much from the people who think the Civil War was fought over states’ rights.

The role of Aunt Jemima and what is happening now with reactions to her image is the inevitable consequence of our segregated society and the whitewashing of history. It is likely that many people who are mourning her untimely departure live in completely segregated communities, not by law but by choice.

When you don’t have to learn about actual Black cultural icons, or the legacy that America chattel slavery left behind, Aunt Jemima can be conveniently deployed for whatever cause you’ve decided to embrace at a current moment. Black history can be sanitized for the comfortable consumption of white people, protecting the lies they’ve been sold about Blackness and American history.

But now, for the first time in generations, those lies are being exposed to a mainstream audience, and whiteness as the default culture is being questioned. It’s reflected in the protests against police brutality, in the realization that despite being the wealthiest country in the world, we have failed to contain the coronavirus that has disproportionately affected people of color, and that the socioeconomic crisis caused by the pandemic could have been avoided if there were less income inequality.

It may seem contradictory, but the rush to defend Aunt Jemima as a symbol of American exceptionalism, the idea in which one can be born a slave and die a millionaire, is a last ditch attempt to save the flawed ideals that are imperative to renounce. And yet, in some ways, it makes perfect sense: If the core tenet of your ideology is preserving white supremacy, you’ve got to go to the mat for anything that threatens it—even racist syrup logos.