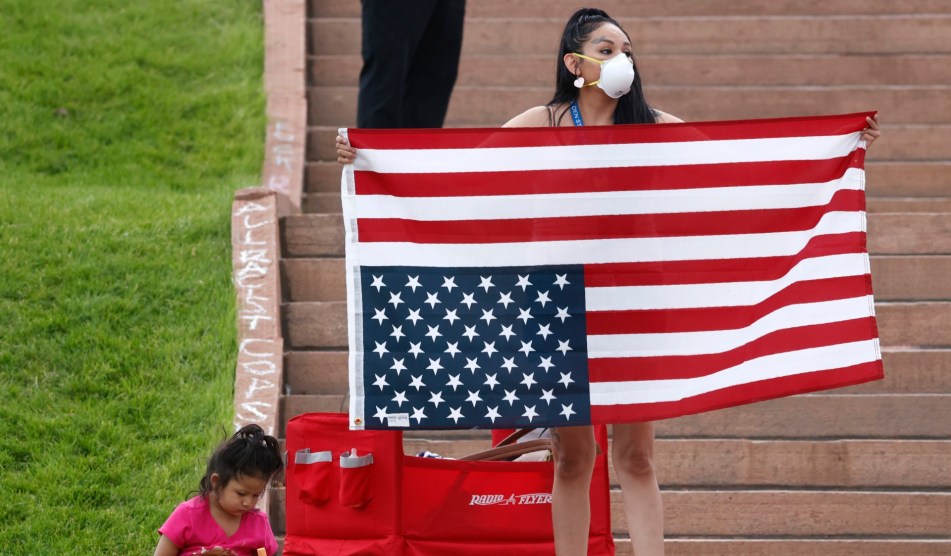 In Denver, a protester holds an American flag upside down. David Zalubowski/AP

Last night, a graphic video of Buffalo, New York, cops shoving a 75-year-old peace activist to the ground went viral—revealing that he did not, in fact, trip and fall, as the department had initially claimed. The activist, Martin Gugino, could be seen bleeding in the video and had to be hospitalized.

Soon after, the officers were suspended without pay.

Then, today, this happened:

#BREAKING: I’m told the entire @BPDAlerts Emergency Response Team has resigned from the team, a total of 57 officers, as a show of support for the officers who are suspended without pay after shoving Martin Gugino, 75. They are still employed, but no longer on ERT. @news4buffalo

To be clear, these 57 officers didn’t quit the force. But they are refusing to participate in the unit that performs crowd control. As the Buffalo News reported, a police union official said the suspended officers were “simply following orders.” The mass resignation was a sign of solidarity for the people who, again, pushed a 75 year-old peace activist to the ground for violating curfew. “They were simply doing their job,” the union official continued. “I don’t know how much contact was made. He did slip in my estimation. He fell backwards.”

Sort of sounds like this isn’t just a case of “a few bad cops,” but instead a systematic problem of police causing violence and refusing to be held accountable for their actions.