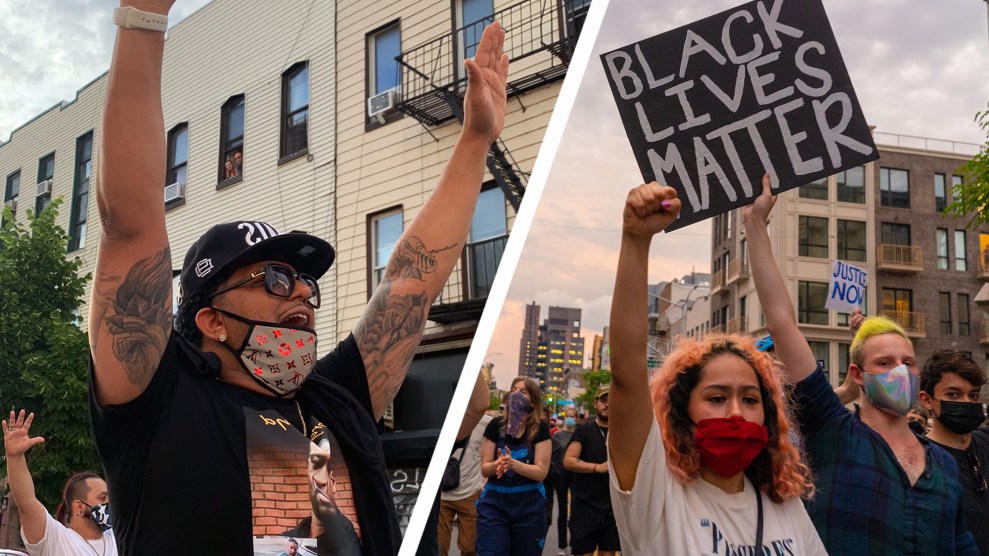 Police trailed a raucous, peaceful protest of several hundred people in Brooklyn early Wednesday night, permitting demonstrators to take over streets past curfew. While sporadic confrontations broke out at separate protests later, at least for these twilight hours, the scene provided a striking contrast to days of images dominated by police aggression.

As the sun set, and a citywide curfew came and went, our digital producer Mark Helenowski followed a sizable group of spirited protesters through the Bushwick and Williamsburg neighborhoods of Brooklyn, just one of many such groups across the city, large and small. Residents shouted support from rooftops; others banged pots while leaning out windows. On the ground, truck drivers, postal workers, and transport officers stopped to cheer on street corners. “Fuck your curfew!” the group chanted. A police officer on the scene said the NYPD would let the protest continue “as long as it stays peaceful.”

But just *listen* to the sound of protest and support here in Bushwick. pic.twitter.com/4YZSPqMdgd

The afternoon’s breaking news that all four officers involved in George Floyd’s death have now been charged won’t abate the defiance and energy of protesters, said Dawaun Hill, a 28-year old accountant. “I wish [the charges] would have happened without the reaction of the people,” he said. “But wait—people have to riot? People have to loot?”

Kevon, a 35-year old bike messenger, agreed. “I know they’re just token charges. They don’t want any more destruction of property, so they’re going to throw a couple of their own under the bus.”

I met Dawaun Hill at a BLM protest tonight. He moved to Brooklyn last week and was one of the loudest voices in the crowd.

On police violence: "I don't think it will ever end." pic.twitter.com/rOZfg2g4Gf

“Power to the people!” Courtney Bledsoe, a 33-year-old comedian, yelled from the sidewalk. “Your whole life, you watch black people die. You watch them die. And nobody cares. And finally we’re starting to see people care,” she said, wiping away tears.

“The government has started to realize that this is a real movement,” says Gary Guzman, 35, a local small business owner, on his third day of protesting.

“We won’t stop until we have what we need in this country.” pic.twitter.com/GdhCaRIDM2

“The government is starting to realize that this is a real movement going,” said Gary Guzman, a 35-year-old owner of the local Brooklyn Drip clothing store, in between bouts of leading the group in chants. “Every day is getting stronger and stronger.”

This was his third day of protesting—and he’s not quitting anytime soon: “We won’t stop until we have what we need in this country.”

Listen to Mother Jones reporters cover protests from Minneapolis to New York, on this episode of the Mother Jones Podcast: