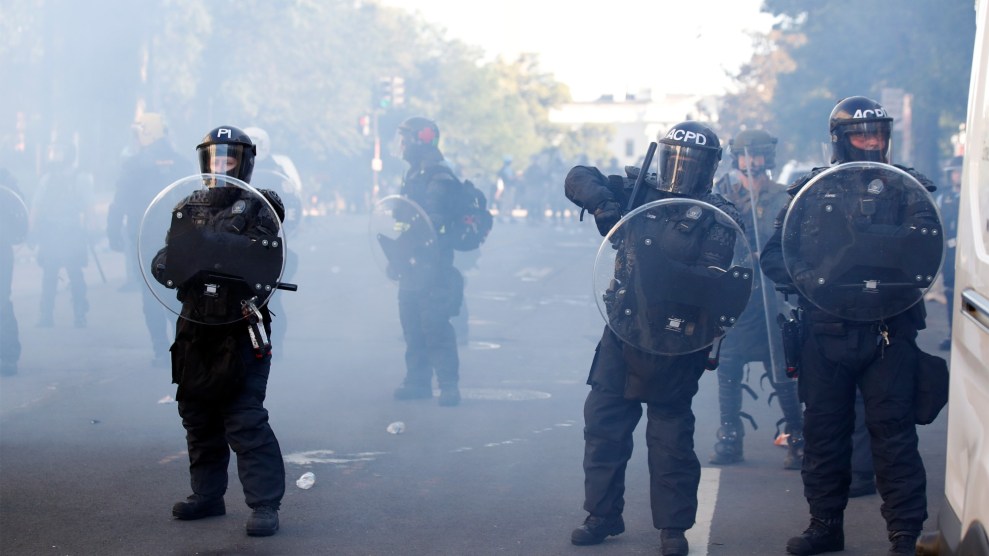 On Monday, police fired tear gas at peaceful protesters so that President Donald Trump could pose for a photo. Trump was condemned widely—even by former Defense Secretary James Mattis. Now, he’s being sued.

The ACLU of DC, on behalf of the DC chapter of Black Lives Matter and individual protesters who were attacked in the president’s stunt, filed a lawsuit on Thursday against Trump, attorney general William Barr, and other federal officials for violating their constitutional rights. According to the lawsuit, the president’s actions are “the manifestation of the very despotism against which the First Amendment was intended to protect.”

The events that transpired over the course of 48 minutes in Lafayette Park on Monday have drawn universal outrage. In isolation, a country’s leader gassing protesters for no reason is heinous. In context, it’s hard to fathom how it could be forgivable (even if Republican Senators found a way). Here’s what happened, per Mother Jones‘ Becca Andrews:

Since that photo was taken, the Trump administration has gone to great lengths to gaslight the country over what happened during an event that was captured on camera from almost every conceivable angle. The president’s reelection campaign contacted Mother Jones, as well as other news organizations that reported on the spectacle, claiming that tear gas wasn’t used (it was) and demanded a retraction. Meanwhile, the clergy of St. John’s church—some of whom were among the hundreds of protesters who were attacked—has condemned the president’s stunt. They still can’t get back into their church, thanks to Trump.
“What happened to our members Monday evening, here in the nation’s capital, was an affront to all our rights,” April Goggans, the core organizer of Black Lives Matter DC and the lead plaintiff in the case, said in a statement. “The death of George Floyd and Breonna Taylor at the hands of police officers has reignited the rage, pain, and deep sadness our community has suffered for generations. We won’t be silenced by tear gas and rubber bullets. Now is our time to be heard.”
Scott Michelman, the ACLU of DC’s legal director, added in a statement that Trump’s actions weren’t just shameless, but indeed unconstitutional and “a criminal attack” against protesters he disagreed with. He also had some choice words for Barr: “When the nation’s top law enforcement officer becomes complicit in the tactics of an autocrat, it chills protected speech for all of us.”
Here’s the full complaint: