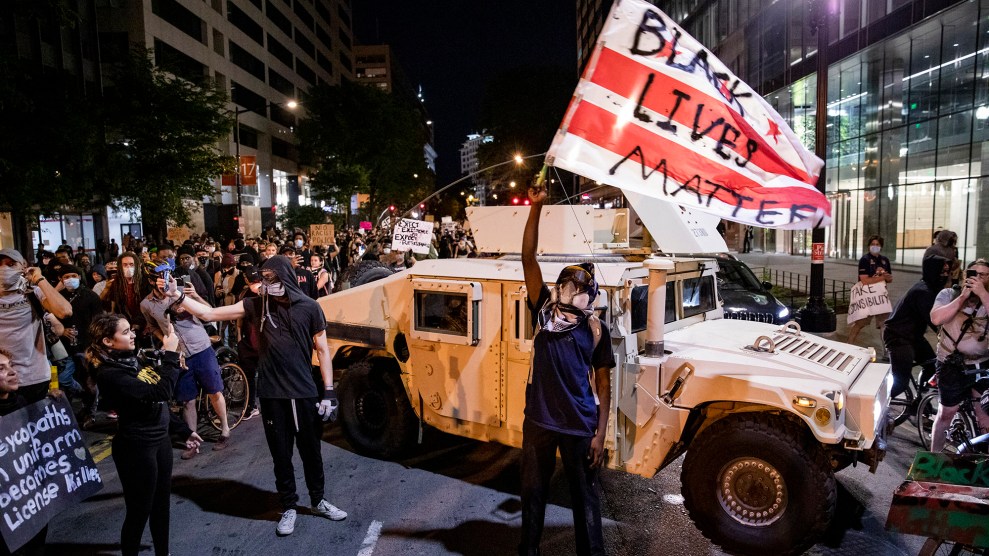 This morning, as protesters were expected to hit the streets of the nation’s capital for a 10th day of demonstrations against racist police violence, President Donald Trump tweeted that he would withdraw the National Guard from Washington, DC, asserting that “everything is under perfect control.”

I have just given an order for our National Guard to start the process of withdrawing from Washington, D.C., now that everything is under perfect control. They will be going home, but can quickly return, if needed. Far fewer protesters showed up last night than anticipated!

Trump, who has always been obsessed by crowd size (and false claims about them), insisted that “far fewer protesters showed up” than anticipated. It’s unclear how many people he thought would show up to in the city and in the newly-renamed Black Lives Matter Plaza a few blocks from the White House.

The Washington Post reported that more than 10,000 people marched in Washington, DC, on Saturday. As my colleague Will Peischel reported, the peaceful demonstration felt less like the riots condemned by Trump and more like a summer block party.

This is huge, and it looks like a block party. More grills, food trucks, tends, etc. pic.twitter.com/cm5eZK5GGY

Trump’s decision earlier last week to dispatch the National Guard and unidentified law enforcement personnel to contain largely peaceful protests marked an escalation in force as demonstrations unfolded across the country in response to the killing of George Floyd in Minneapolis. More than 5,000 National Guard troops were called in, including soldiers from DC and 11 states. On Friday, Mayor Muriel Bowser asked the president to remove all “military presence from our city.”

I request that @realDonaldTrump withdraw all extraordinary federal law enforcement and military presence from our city. pic.twitter.com/AvaJfQ0mxP

She also asked the president to withdraw “extraordinary federal law enforcement,” noting that the presence of “unidentified federal personnel patrolling the streets of Washington, DC pose both safety and national security risks.” Trump has not said whether he would withdraw the unidentified officers that Mother Jones reporter Dan Friedman spotted on the streets last week, and who were still out in force yesterday.

These guys at Second and Pennsylvania told me they are from DEA though I didn’t see markings indicating that. pic.twitter.com/gwTfKzYnu7