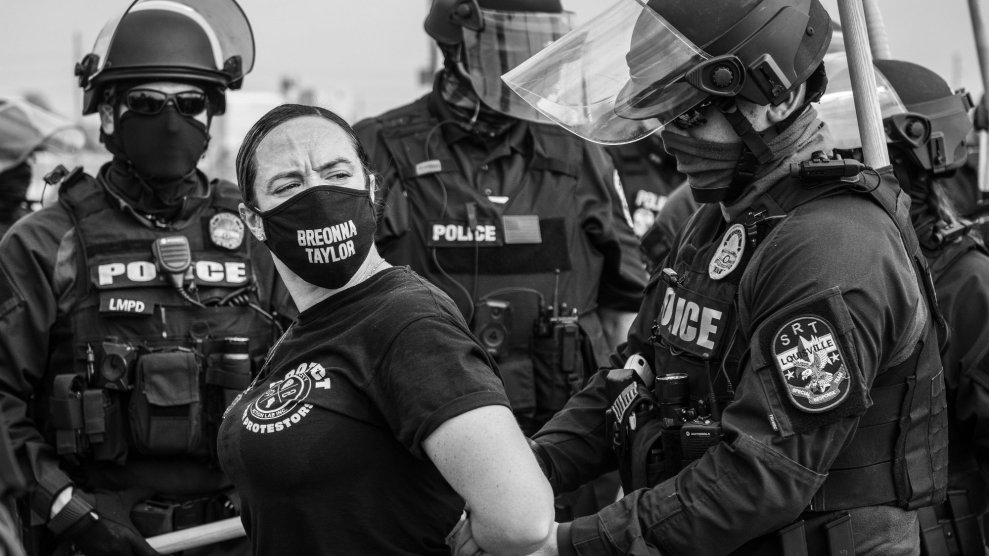 A protester is arrested in Louisville, KentuckyImagespace/Zuma

After Jacob Blake was shot several times in the back by Kenosha, Wisconsin, police officer Rusten Shesky, and was lying paralyzed from the waist down and handcuffed to a hospital bed, right-wing media, conservatives, and the usual crowd of other assorted racists were searching for a justification for what seemed to the rest of the world as an unprovoked assault. Some said that Blake was reaching for a knife. Others insisted he was resisting arrest. The more creative ones claimed that he had sexually assaulted a minor (something the police officer likely wouldn’t have known). And so, of course, he deserved to be maimed. The basic message was obvious: His very Blackness meant that he couldn’t possibly be considered to be an innocent victim. He always had it coming.

Blake has joined a perpetually growing list of Black people who’ve been on the wrong side of a gun clutched in the hand of someone unable or unwilling to see our humanity; Ahmaud Arbery, Breonna Taylor, George Floyd—their stories are different yet remarkably similar. Arbery, who was shot and killed by armed white men in Georgia for the crime of Running While Black, was falsely accused by right-wing media of robbing a home. Taylor, an emergency room technician who was killed by Louisville Police while sleeping in her own bed, has been described as being involved in the drug trade, despite no evidence and her family’s insistence that this is simply not true. And Floyd, the catalyst for the ongoing protests and the uprising sweeping the country, has been described as having resisted arrest and having fentanyl in his system.

But even if all of these false allegations were true, they still would not justify the killings. Police and white people with guns are not the judge, jury, and the executioner, even though recently they have done a good job of adopting all those roles. The rush to search for an excuse, any excuse, for these deaths rests in one underlying assumption: There is no such thing as a Black victim.

The rush to search for an excuse, any excuse, for these deaths rests in one underlying assumption: There is no such thing as a Black victim.

Unfortunately, this also seems to extend to Democrats, liberals, and other anti-racists who are constantly on the defense, desperately trying to prove that these deaths are unjust. As soon as the victim is accused of resisting arrest or smoking weed in college, well-intentioned people flood my social media feeds with videos and images of Black people doing absolutely nothing and still being targeted or killed by police as counter-narrative to a false narrative they seem to have accepted. They are searching for the perfect victim, the clear cut case that will finally convince the right and other assorted racists that we aren’t to blame for our deaths.

There’s a problem though. All that these good intentions achieve is to reinforce the idea that some Black people do deserve to be killed by police. And if they’re convinced that Black people are incapable of being victimized, what purpose does the search for the perfect victim serve—other than diverting our attention to the real victim and traumatizing the rest of us with endless loops of death?

In the Trump era, the denial of victimhood has been expanded to include anyone who fights to curb police violence. Despite the administration’s claim that they support peaceful protesters, all demonstrators continue to be depicted as anarchists, terrorists, thugs, and looters. When Kyle Rittenhouse, a white armed 17-year-old from Illinois, shot three protesters in Kenosha, Wisconsin, killing two, the president couldn’t even bring himself to denounce Rittenhouse or offer words of sympathy for those who were slain (who happened to be white). He did, however, offer words of regret for Aaron “Jay” Danielson, the far-right protester who was shot dead in Portland on Saturday.

The backdrop for all the violence unfolding in the country is the coronavirus. The highly contagious disease has sickened more than 6 million people making the United States the country with the worst outbreak in the world. The impact of the disease hasn’t been equitable. Black and Brown communities have suffered disproportionately from the infection and deaths, partly because those who live in these communities are more likely to suffer from underlying health conditions.

For months, conservatives and Republicans have been pushing the lie that only those with underlying health conditions can die from the virus, as if that explains the mortality rate instead of the utterly inept response of the administration to the crisis. Over the weekend, as the coronavirus death toll climbed past 180,000, Trump retweeted a false claim that only 9,000 people had died from the virus in the US, because researchers estimated that these were the only people who didn’t have any other underlying conditions. Those tens of thousands of other people with diabetes or high blood pressure or even high cholesterol were going to die anyway. In other words, like victims of police shootings, they basically had it coming.

Essentially blaming tens of thousands of COVID-19 victims for their own deaths helps Trump do the only thing he’s good at doing: not taking responsibility. If the death toll is dramatically lower,  Trump doesn’t have to shoulder any blame for his disastrous handling of the pandemic. If Blake deserved to be shot seven times, and the vague possibility of fentanyl made it only reasonable for Floyd to have had his airways restricted until he died, then police violence against Black people isn’t endemic in this country. The wave of violence at protests over the last few weeks becomes Joe Biden’s fault. After all, if victims of police brutality and 183,000 from the coronavirus deserved to die, then Trump can blithely exempt himself of any responsibility at all. He can just sit back and watch it burn.