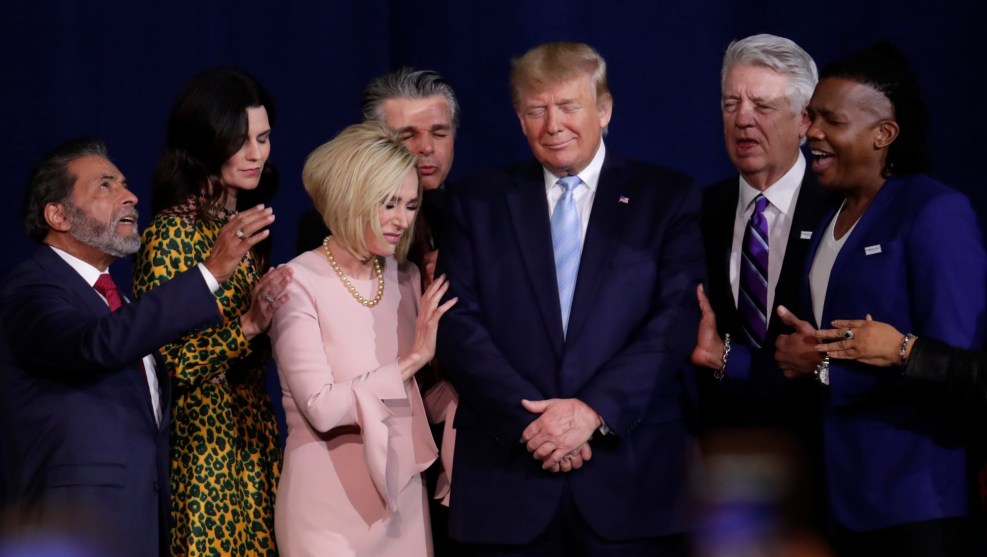 President Trump at a rally for evangelical supporters in Miami on January 3.Lynne Sladky/AP

As the coronavirus continued to kill, hospitalize, and harm thousands of people this weekend, President Trump declared that Sunday was, rest assured, a National Day of Prayer. “We are a Country that, throughout our history, has looked to God for protection and strength in times like these,” he tweeted.

It is my great honor to declare Sunday, March 15th as a National Day of Prayer. We are a Country that, throughout our history, has looked to God for protection and strength in times like these….

Whatever you make of Trump’s stunning incompetence in orchestrating the government’s response to this outbreak, he was unmistakably wrong about this country’s history, the Constitution, the extent of federal powers, and the underpinning of government. The United States was founded not on state-sanctioned faith or godly government prayer, but on the right to practice any religion, or none at all, free of presidential proclamations about if, when, and how you do; it was founded on the slavery of bodies, not the slavery of conscience or minds. It’s a country rooted in Thomas Jefferson’s Virginia Statute for Religious Freedom, which explicitly separated God and government as the forerunner to the First Amendment’s Establishment Clause forbidding state endorsement or sponsorship of religion.

Trump’s proclamation of prayer isn’t unique to him. It’s an echo of the endless invocations of God in presidential life. From the inevitable thoughts-and-prayers stock response to deadly tragedy, to the requisite “God bless America” postscript of every political speech, pious nods to religion have been thoroughly incorporated into presidential rhetoric. The cost of this unconstitutional practice is amplified right now, when there’s lethal harm—not just in terms of being ill-prepared for a pandemic, but in the erosion of confidence in our institutions. Some of this harm is exacerbated because we continue to collapse church and state and (unconstitutionally) substitute federal faith for the full deployment and funding of scientific research.

And it’s especially cynical in an administration that bows before evangelical voters who are proving to be the president’s most loyal supporters. Secretary of State Mike Pompeo has linked his religious beliefs to foreign policy, and delivered a state-sponsored speech on “Being a Christian Leader” in his official capacity. Vice President Mike Pence is a walking billboard for government’s religious claims. Attorney General William Barr invokes God as the legal, moral, and political precept for government whenever he can. The good doctor Ben Carson, Secretary of Housing and Urban Development, named God as the groundwork for government action in addressing the coronavirus.

To freely practice religion, or none, requires freedom from the state having any say in when and whether you do so.

To freely practice religion, or none, requires freedom from the state having any say in when and whether you do so—pray all you want, publicly or privately. But at a time when millions of lives are on the line, the president’s federal call to prayer isn’t just unconstitutional—it’s obscene. A lot of us are going to get this virus. The need for solidarity, solace, and comfort is crucial in crisis, and that may be found in prayer for some. But these are moral imperatives discoverable and defendable through many means of knowledge, which shouldn’t be predicated in the public sphere on any that are theocratic.

The National Day of Prayer was signed into law by President Harry Truman in 1952 as an endorsement of religion, which even though plainly violating the First Amendment—“Congress shall make no law respecting an establishment of religion”—took nearly 60 years for a federal judge to declare unlawful, in 2010. US District Court Judge Barbara Crabb wrote simply, “The government may not endorse a religious message.” Nonetheless, Trump trafficking in yesterday’s National Day of Prayer was different from similar bromides from previous presidents. He trespassed overtly on the urgent secular search for disease control. The government should busy itself exclusively with preventing more deaths. That starts with amplifying public health as indispensable, not promoting federal prayer as if it were constructive. The federal day deserves rejection because prayer itself deserves protection.

When ruling against the law, Crabb found that the day “goes beyond mere ‘acknowledgment’ of religion because [the day’s] sole purpose is to encourage all citizens to engage in prayer, an inherently religious exercise that serves no secular function in this context.”

She found in favor of the Freedom From Religion Foundation, the challenger, but was overturned on appeal by a court that said the group had no legal standing to file the claim because it suffered no “injury,” ruling not on the merits of the challenge but on the group’s right to bring it.

The National Day of Prayer during a pandemic has especially troubling implications. It privileges the pairing of religious rhetoric and government action. Any president singling out and supporting a federal day of prayer erodes that separation. But this administration has been blatant about it. Consider Barr’s boast to the law school at Notre Dame: “Judeo-Christian moral standards reflect the rules that are best for man,” he told students in October. “They are like God’s instruction manual for the best running of man and human society.”

The president’s podium should not be a pulpit. Despite all the religious apologia left and right in government, it never will be. This president recites prayerful words as if spraying perfume on preventably dead bodies. If we continue to equate prayer and patriotism—and confuse the pageantry of prayer with meaningful action—the loss of life will continue, long after this particular contagion is gone.