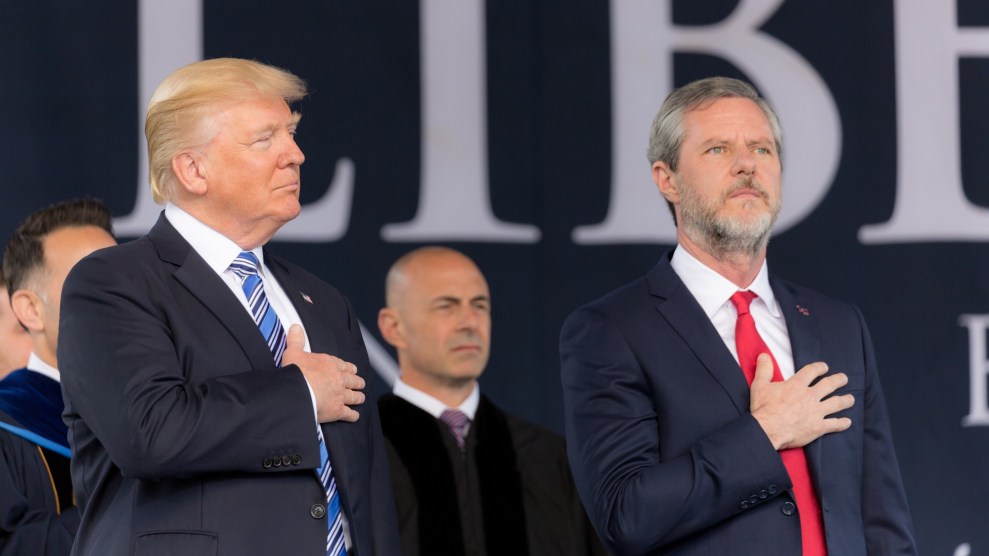 While schools and college campuses around the country remain closed to prevent the spread of the coronavirus, Liberty University is set to allow the return this week of up to 5,000 students. The plan was announced by the private evangelical university’s scandal–plagued president, Jerry Falwell Jr., an ally of President Trump. Trump in recent days has dismayed public health experts by announcing he may push for the lifting of restrictions on businesses to reduce economic damage as soon as next week.

In an interview last week with Fox News Radio’s Todd Starnes, Falwell said it is fortunate that COVID-19 “doesn’t have a high mortality rate for young people because they’re the ones that are not worried about it. And I’m not worried about it.” Falwell said healthy people should stay away from those “who are high risk” and elderly people. But he accused the media of overhyping the disease. “Thank God we have the best president we could possibly have to deal with a crisis like this,” he said. “Shame on the media for trying to fan it up and destroy the American economy. They’re willing to destroy the economy just to hurt Trump.”

This week, Falwell told the Lynchburg, Virginia, News & Advance that “we have a responsibility to our students — who paid to be here, who want to be here, who love it here—to give them the ability to be with their friends, to continue their studies, enjoy the room and board they’ve already paid for and to not interrupt their college life.”

Falwell told the paper that between several hundred to more than 5,000 students will be allowed to return to campus dorms, though they will continue to do work online rather than in classrooms. (Liberty, based in Lynchburg, already caters to a large majority of its students through online courses.) Falwell says he is banning gatherings of more than 10 students.

The News & Advance noted the Liberty students will return even as the Virginia Department of Health announced new coronavirus cases in the Lynchburg area.

In an op-ed Monday in the Washington Post, Marybeth Davis Baggett, an English professor at Liberty, called for the university’s board to override Falwell’s “foolhardy decision.”

“Liberty is not a bubble where the virus would be contained,” Baggett wrote. “Instead, its population comes into regular contact with those in the Lynchburg community, putting their health and lives at risk as well. “It is unconscionable that the leadership of the university is fully implementing Falwell’s politically motivated and rash policy that unnecessarily risks an unmanageable outbreak here in Lynchburg.”