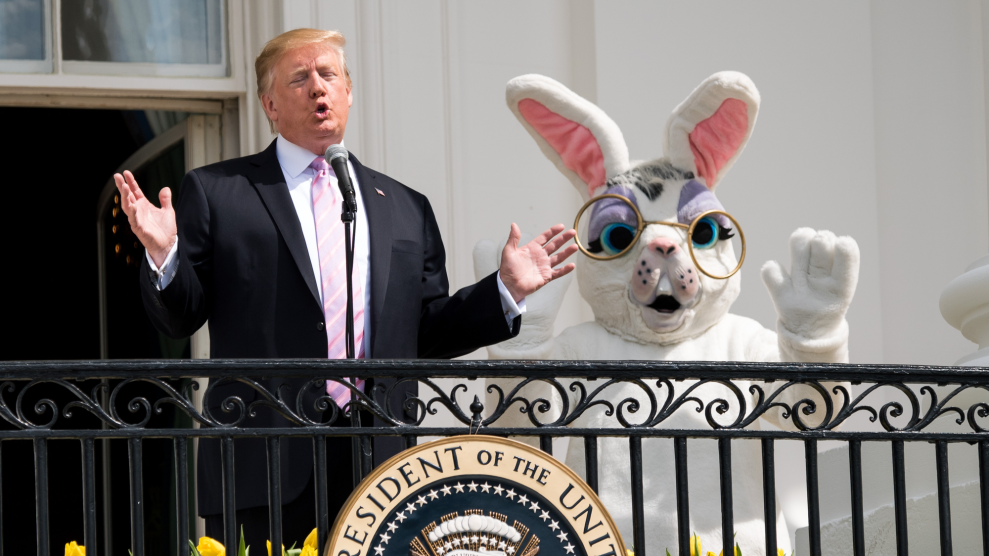 Despite experts urging that quarantine measures may need to continue for months to quell the spread of coronavirus, President Trump has said he wants the United States to be “opened up and just raring to go” by Easter, in less than three weeks. Why Easter? “I think it’ll be a beautiful time,” he told reporters on Tuesday, even as the Pope was instructing bishops to help Catholics celebrate Easter from home. “Wouldn’t it be great to have all the churches full?” said Trump.

Let’s be real: Despite his recently adopted pro-life views, our twice-divorced, oft-philandering president has never been religious. What he really wants is to end the lockdown quickly in order to save “the economy.” Politicians keep suggesting we forgo public health advice and get back to work for the sake of this “economy” thing; the ironic hashtag #DieForTheDow trended on Twitter after the 69-year-old lieutenant governor of Texas suggested he’d risk dying from the virus to keep the stock market chugging. (But would he be resurrected on Easter?)

No matter what they preach in the churches of Texas, there is one authority higher than that of Jesus in this country: capitalism. In 1921, Jewish philosopher Walter Benjamin called capitalism “a purely cultic religion” that grew as “a parasite of Christianity,” until it replaced the church as the focus of Western life. Charity and selflessness are still the transcendent principles guiding people’s decisions; it’s just that they’re invoked to serve the market instead of other people.

If given the choice between dying and plunging the country I love into a Great Depression, I’d happily die. https://t.co/MznAkp3kwD

Congress limited its relief spending for American households by diverting vast sums to major industries. We can’t afford to give everyone health care, they say; better to watch people get sick and die instead of the airline industry.

This relentless focus on profit has not translated into higher wages for the average American in almost half a century. “In our world, we no longer work in order to satisfy our own needs,” writes Byung-Chul Han, a Korean-German theorist of neoliberalism, in his 2017 book Psychopolitics. “Instead, we work for Capital. Capital generates needs of its own; mistakenly, we perceive these needs as if they belonged to us.” He adds that neither workers nor the ruling class is free from these demands: “Today, the Dictatorship of Capital rules over everyone.”

Yet the privileged few—politicians, investors, corporate execs—benefit from this arrangement. They leverage stock buybacks and insider knowledge to keep their pockets flush while workers take the hit. They ask beleaguered tenants to keep paying rent and threaten to evict paramedics. When they talk about dying for “the economy,” what they really mean is you dying for their economy. God rewards His faithful servants.

Meanwhile, the World Health Organization continues stressing the need for a collaborative response to a virus that is, by its nature, a threat to the entire human species; no country or class is exempt. In a speech urging lockdown measures to stop the rampant spread, the WHO director-general said, “Let our shared humanity be the antidote to our shared threat.”

Capitalists typically justify poverty and illness by blaming groups of people: some don’t work hard enough (the “undeserving poor”); others are simply unclean. The coronavirus explodes such rationalizations. Among people stricken with the virus, there is no undeserving sick, and no amount of hard work and fiscal prudence could have saved people from economic devastation. In a pandemic, the illusions fall away, and the true nature of these everyday distinctions is exposed—it’s not the good against the wicked; it’s the market against humanity.

I’d like to think there was a time when humanity was prioritized over capital, profit, and the economy. Even today, the rapid growth of mutual aid networks responding to COVID-19 shows that plenty of us are willing to make generous sacrifices for people we’ve never met. Supporting others in your community will never be unimportant, yet many of these efforts—like Venmoing newly unemployed friends to help them pay bills—would not be necessary in countries that have woven strong social safety nets to catch their vulnerable. Every Italian, for instance, is entitled to four weeks of paid vacation per year, on top of paid sick days.

“It’s too expensive,” you can imagine our leaders saying when considering such a policy, Republican and Democrat alike. “We can’t afford it.” They’d sooner give up the sanctity of human life than reach toward a different system. Adopting single-payer health care, universal basic income, and other forms of social democracy has long been considered politically impossible in the US—until coronavirus hit. We can begin the work of re-ordering our priorities now that they’ve been laid bare.

Meanwhile, the White House Easter Egg Roll will likely remain canceled, and Trump will throw a tantrum somewhere in the White House, from deep within his social isolation.