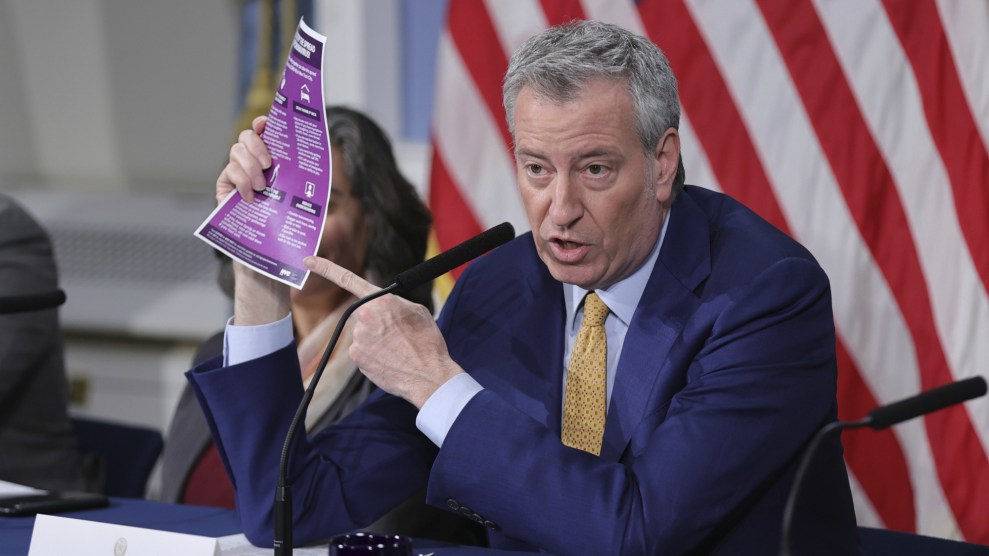 Mayor De Blasio of New York City said public schools in the city will be closing beginning tomorrow—and may not be open for the rest of the school year.

"We will make a first attempt to restart our schools on Monday, April 20th." https://t.co/IxgeoPwNOL pic.twitter.com/BFDlW01Ipg

De Blasio added that schools will be open next week for parents to get meals for their children. “I know just how much parents depend on our schools,” he said. “I know the full cost of shutting our schools.” He called the decision “very painful.”

There has been ongoing tension over the continued operation of the city’s public schools—the biggest in the country, with nearly 1.1 million students—and de Blasio’s wariness to close them. As Eric Umansky wrote for ProPublica:

New York, of course, faces an excruciating decision. It’s the largest public school system in the country by far, with 1.1 million children. Roughly three-fourths of students are in low-income families, and about 10% are homeless. They get fed at school.

Mayor Bill de Blasio has said he’s worried about “a cascading effect” that shutting the schools could have, forcing many vital sectors’ employees to stay home.

De Blasio has also expressed doubt about the effectiveness of a closure. “Do we really believe these kids will hole up in their rooms for a month?”

But other large cities, including Los Angeles and Chicago, are shuttering their schools. And pressure is becoming overwhelming for New York City to do the same.

But the tides turned this weekend. A major step was the decision by 1199SEIU, a major union representing health care workers, to reverse course and call for school closures. (Previously, the union opposed closing schools, hoping to hold off a downturn in wages.)

Then, on Sunday afternoon, Gov. Andrew Cuomo pre-empted de Blasio’s press conference by announcing to the New York Times that schools throughout southern New York, including in the city, would be closing.

Cuomo stepping on the mayor's lead, says on CNN that NYC schools will close. Doesn't specify when.

"We will be closing schools in New York City, Nassau, Suffolk and Westchester Country. That’s all of downstate NY."

“I believe that the New York City schools should be closed, period,” the governor told the Times. “We also need an immediate plan to provide child care for essential workers and for food programs for the children.”

The decision joins other major closures from states today. Both Ohio and Illinois moved to shut down bars and dine-in service at restaurants, and California shut bars, wineries, and brewpubs and called for “the home isolation” of seniors and “all those with chronic conditions.”