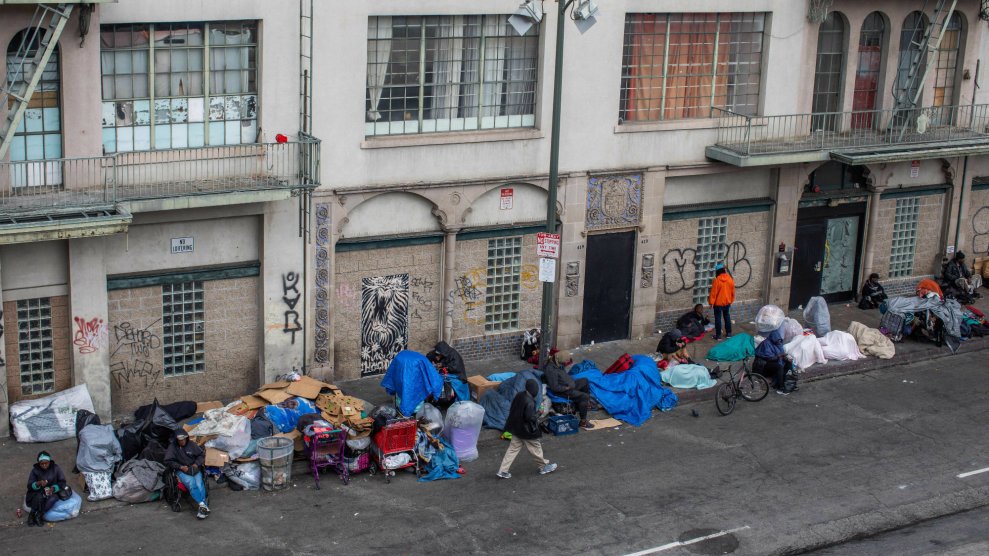 As infection rates of the new coronavirus in the United States mount, the pandemic has upended daily life around the world, causing soaring unemployment, school and business closures, and forcing the governors of New York and California to order everyone but essential workers indoors.

The Trump administration has been criticized for its response, which included first downplaying the severity of the situation, trafficking in conspiracy theories about the virus being a media plot to derail the 2020 election, and delaying any mobilization of public health resources which caused testing shortages and made it nearly impossible to determine the true number of cases nationwide. By Friday afternoon, there have been nearly 17,000 confirmed cases and 229 deaths in the US. As the situation became increasingly dire, Congress has moved to pass emergency funding to respond to the catastrophe—but some of the most vulnerable among us are still excluded.

As I’ve been reporting throughout the coronavirus crisis, the stay-at-home edicts coming from state and local officials and the Centers for Disease Control and Prevention is easier said than done for the homeless community. The more than half a million unhoused people in the US are at an extreme risk of contracting the coronavirus, and the only way to ensure their safety is with help from Congress.

In order to understand what’s at stake and what Congress should be doing right now, I spoke with Diane Yentel, the CEO and President of the National Low Income Housing Coalition.

What are the inherent risks at shelters right now?

People who are homeless are at a higher risk than people in the general population. They tend to be, on average, sicker. They have underlying conditions and are also very vulnerable to catching and spreading disease because of the very nature of living in a shelter or homeless encampment. There are no opportunities to implement social distancing.

Shelter providers are really struggling right now. They have limited resources and they lack any kind of safety and protective measures. They don’t have hand sanitizer, gloves, masks, or any of the equipment they need. Some staff are getting sick or are taking care of someone who is sick. Volunteers are not showing up; a lot of them are retired seniors so they rightly don’t want to put themselves at risk.

I know of about 15 shelters that have closed their doors entirely or cut back services substantially. For shelters that are doing their best to implement social distancing, that means taking out half the beds so they can space them it. That means serving half as many people and not taking in any new residents.

Some shelters are only open at night, during the day people who are homeless have to find some place to be, but then come back at night and sleep in close quarters.

There is some disagreement on whether unhoused people should be moved into shelters—which can be crowded and have no place for quarantine—or whether workers should bring critical supplies to them.

The only reason that’s an issue at all is because there are not sufficient places to put people. There’s no doubt that someone who is vulnerable and is living on a sidewalk would be much better in a hotel room, but for places where there aren’t any sufficient alternatives, ensuring that people at least have their basic needs met like hand sanitizer and hand-washing stations is better. But we should all be working to towards getting people off the streets and into hotels.

Where is that happening?

In California, the governor has a contract with 900 hotels. He’s being very aggressive and for good reason: there are 108,000 people without shelter and 150,000 homeless total. New York should do the same.

What does medical care look like inside of a shelter?

There are communities that have plans, but they don’t have the resources in place. In places where the health care systems are going to be overwhelmed, it doesn’t bode well for homeless people. But there are ways to address this. There are ways to use trailers, hotel rooms, and to build out new wings of shelters for people to quarantine in and also for people to receive on-site assistance. But Congress is not providing the funds they need.

What should Congress be doing right now?

“Unfortunately, the first two [coronavirus aid] packages have had $0 for homeless and the eight million people right on the cusp of being homeless.”

Congress should immediately provide between $10 and $14 billion in emergency solutions grants. These are grants that could help meet all of the needs we just talked about like finding the space to do social distancing and quarantines, providing medical care, hand sanitizer, and hand-washing stations. The ESG program is the way to get money quickly. Unfortunately, the first two [coronavirus aid] packages have had $0 for homeless and the eight million people right on the cusp of being homeless. These families are one financial emergency away from eviction—coronavirus will be that financial emergency unless we do something quickly.

Do you feel like there is a sense that widespread transmission among the unsheltered population will not just be an issue for that community but for all of us?

It’s never been as clear as it is right now that housing is healthcare and our collective health depends on our ability to stay at home. If we don’t have homes to stay in we put people at an immediate and extreme risk, and we risk the health of entire communities. As long as there are people who don’t have homes to isolate in, we are not truly containing this pandemic.