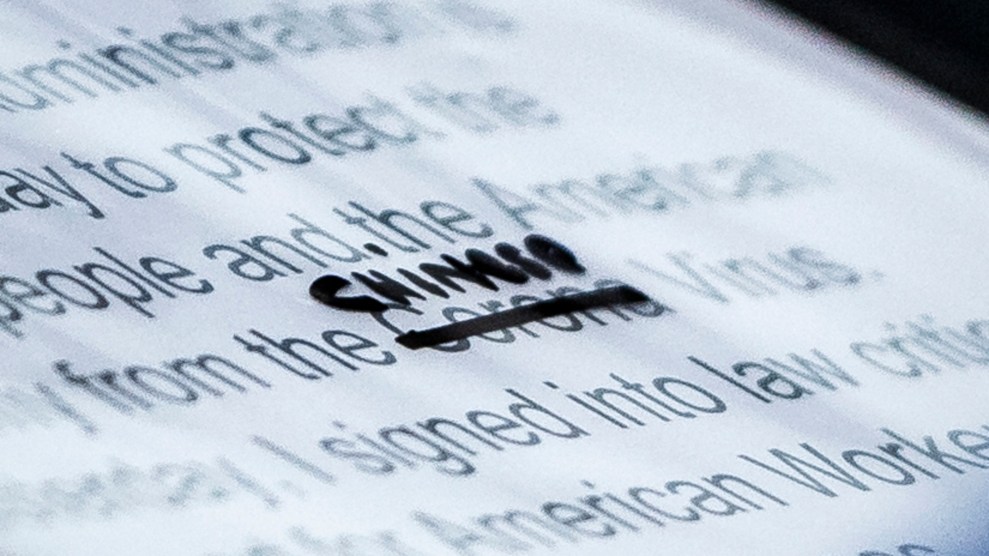 A close up of President Donald J. Trumps notes shows where Corona was crossed and replaced with Chinese Virus during a March 19 press briefing.The Washington Post via Getty Images

On Wednesday, PBS NewsHour‘s Yamiche Alcindor asked President Donald Trump if his use of the term “Chinese virus” to refer to Covid-19 puts Asian Americans at risk. Trump responded: “Not at all, I think they probably would agree with it 100%.”

That was obviously false. Many Asian Americans are among the chorus of critics who have noted that Trump’s words may incite racist attacks. (Trump seems to be purposely courting this controversy to distract from his administration’s response to the public health crisis.)

“I wish he didn’t say that, because it could cause some racists in the country to misread it.”

A better question might be whether any Asian-Americans support Trump’s use of the phrase. I asked Cliff Li, a Chinese American businessman who heads the National Committee of Asian American Republicans, what he thinks. The group, which supported Trump in 2016 and is likely, Li said, to do so again this year, boasts 10 chapters around the country and has helped the campaigns of GOP candidates, in particular in Florida.

Li was careful to note that he does not think Trump is racist and believes Trump’s intent is to “remind the American people of long-term threats from China.” He said he understands where Trump “is coming from.”

Yet even Li would not say he agrees with Trump’s words. “I wish he didn’t say that, because it could cause some racists in the country to misread it,” Li said, echoing the concern raised by Alcindor. “I disagree with that if [that is] the result.”

Li said he is bothered by some Americans tendency to confuse “Chinese-American” with “Chinese” and is concerned that Trump’s words won’t help. “I don’t think it’s the President’s intention to hurt Chinese-Americans, however that is actually the part that worries me,” Li said.

“We want to condemn any racists attack on Chinese-Americans due to the coronavirus,” Li said. “We definitely condemn that.”