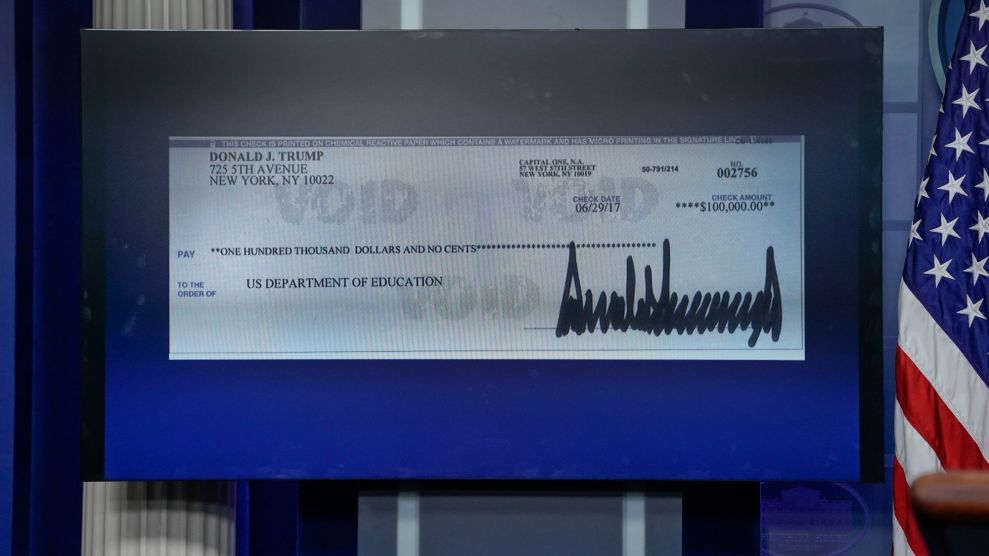 A copy of a check signed by President Donald Trump donating three months of his salary to the Department of Education.Pablo Martinez Monsivais/AP

In a move that should surprise no one, President Donald Trump reportedly wants his signature on the checks that will be sent out to many Americans after Congress passed a $2 trillion stimulus bill with overwhelming bipartisan support.

The Wall Street Journal reported Friday evening that Trump wants his name of the checks, citing an unnamed administration official. Normally, a civil servant would sign them. It’s a move that various commentators predicted in the days for the bill became law.

Prediction – if the coronavirus emergency aid checks go out, this will be the signature: pic.twitter.com/4Nd3NlQp01

Remember when I predicted that American’s Coronavirus checks would bear the signature of ⁦@realDonaldTrump⁩ …. pic.twitter.com/wTG6ETdkAC

The money for the checks comes from Congress, not Trump. The Senate passed the stimulus bill 96-0 on Wednesday. In the House, the bill was set to easily pass by voice vote until Rep. Thomas Massie (R-Ky.) tried to force a recorded roll call vote. Massie’s (unsuccessful) stunt forced legislators to fly back to Washington in the middle of a pandemic.

Trump responded by tweeting that Massie is “a third rate Grandstander” who “just wants publicity.” In a rare moment of Twitter harmony, John Kerry agreed with the president. “Congressman Massie has tested positive for being an asshole,” Kerry tweeted in response to Trump. “He must be quarantined to prevent the spread of his massive stupidity.”