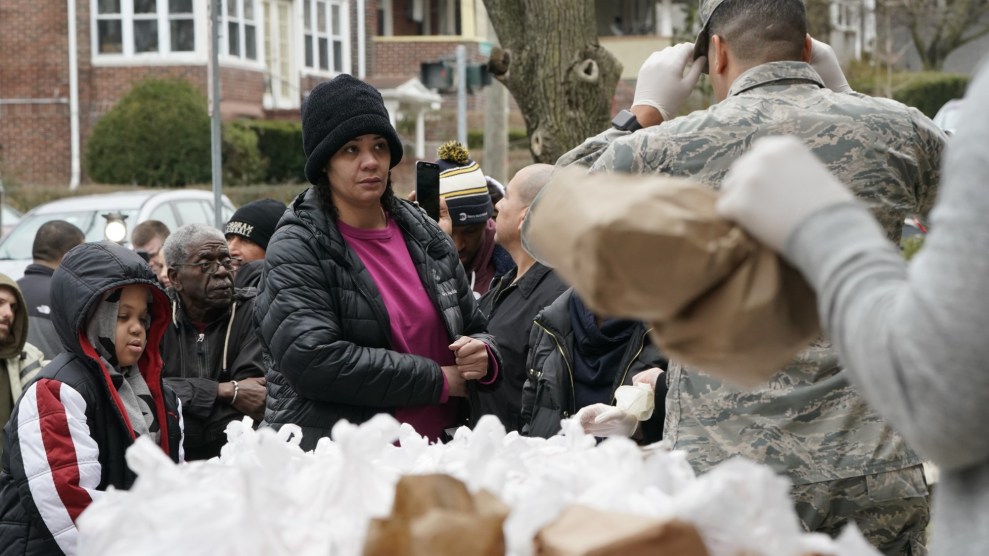 The Army contacted retired nurses, doctors, and other medics on Wednesday, asking whether they would be willing to return to active service to help the military respond to the coronavirus crisis. In doing so, the Pentagon has joined the Department of Veterans Affairs as the latest federal entity to take that remarkable step.

“These extraordinary challenges require equally extraordinary solutions and that’s why we’re turning to you—trusted professionals capable of operating under constantly changing conditions,” stated one typical email, which was signed by Army Deputy Chief of Staff Thomas C. Seamands and provided to Mother Jones. “When the Nation called—you answered, and now, that call may come again.”

For the past few weeks, the Army has battled a coronavirus outbreak among its own staff while assisting state and regional governments on their own virus preparation through components like the National Guard—nearly 11,400 Air and Army Guard personnel have already been activated across the United States, as of Thursday, distributing food and hand sanitizer in some of the states hardest hit by the pandemic. Within the Defense Department as a whole, cases of COVID-19, the disease caused by coronavirus, have risen sharply. At least 600 personnel had tested positive as of Thursday, more than doubling the department’s total in just three days, the New York Times reported.

The Army has struggled to expand its testing capacity in recent days, even as military leaders have struck an optimistic tone to describe a crisis that has all but brought the American economy to a standstill. “I think we have very aggressively moved forward in opening up our labs and our testing capability,” Air Force Brig. General Paul Friedrichs, surgeon for the Joint Staff, said Wednesday. “If someone’s aware within the DOD population where that’s not happening, please let us know, because we do have the capacity to perform the testing on our population.”

Evidently the Army is not satisfied with its existing staffing resources. Seamands’s email called for more nurses, critical care officers, medics, and anesthesiologists, among other medical personnel, but he welcomed other retirees, too. “While this is targeted at medical specialties, if you are interested in re-joining the team and were in a different specialty, let us know your interest,” he wrote.

During previous crises like the September 11 attacks, the Pentagon has involuntarily extended the active service of some enlistees. Perhaps sensitive of the connection, Army officials have emphasized the voluntary aspect of this request. “The Department of the Army is gauging the availability and capabilities of our retired career medical personnel to potentially assist with COVID-19 pandemic response efforts if needed,” the Army noted in a statement sent to me on Thursday, adding that the request “is for future planning purposes only, and is completely voluntary.”

Earlier this week, the VA announced its own campaign to recruit retired health care workers to supplement its own response, which is geared at protecting the nation’s aging veteran population and preparing VA hospitals as backup facilities in case of overflows at civilian hospitals. On Tuesday, the Office of Personnel Management approved a VA request to waive a federal law pertaining to the rehiring of retired VA employees. Normally these employees are paid a lower salary to account for the retirement annuity they already receive, but OPM’s waiver “eliminates that salary reduction, making the prospect of returning to VA employment more appealing,” a department press release stated.

The VA has long struggled with a chronic staffing shortage—including roughly 43,000 vacant positions in the Veterans Health Administration, according to federal data released last year.