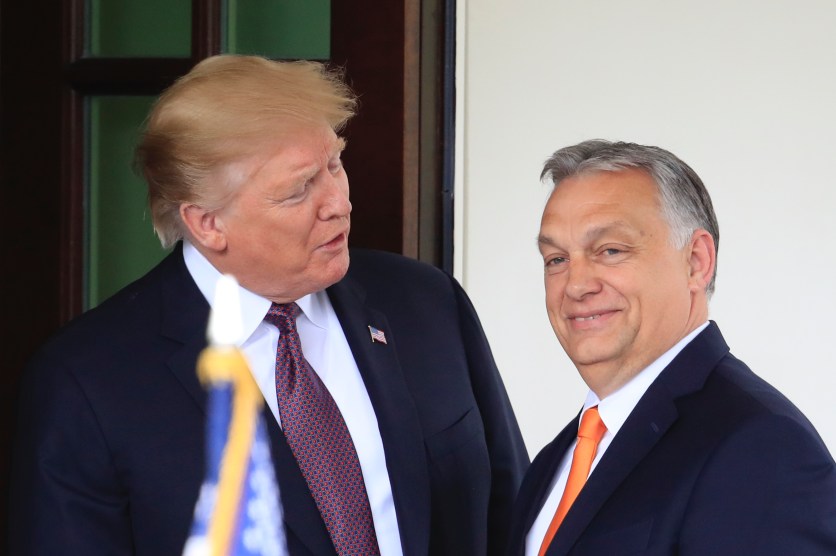 On Monday, Hungary’s parliament awarded its nationalist prime minister, Viktor Orban, the power to rule by decree until his government decides the coronavirus crisis has passed. The move effectively eliminates any democratic opposition, and critics have already assailed it as an authoritarian power grab. Orban doesn’t have many friends in Europe—he is staunchly anti–European Union and has condemned the concept of open European borders, claiming “mixing cultures will not lead to a higher quality of life, but a lower one”—but he has found one in Donald Trump.

Trump met with Orban last spring, over the objections of his then–national security adviser, John Bolton. He praised Orban and drew comparisons between himself and the Hungarian.

“You’re respected all over Europe. Probably, like me, a little bit controversial, but that’s OK,” Trump told his guest. “You’ve done a good job and you’ve kept your country safe.”

At the time, a group of US Congress members objected to the meeting, expressing “deep concern about Orbán’s crackdown on democracy, increased Russian and Chinese influence, and use of anti-Semitic and xenophobic language.”

Orban, who has cultivated close ties with Russian President Vladimir Putin, is known as one of Europe’s fiercest critics of Ukraine, which borders Hungary to the east. According to testimony last fall during the buildup to the impeachment trial, Trump aides were concerned about Orban trying to influence the president against Ukraine’s newly elected president, Volodymyr Zelensky. Several witnesses testified that they believed Orban was responsible for Trump’s belief that Ukraine was corrupt and set against him.

The new law gives Orban wide-ranging emergency powers and the ability to prosecute people who he says are spreading misinformation about the pandemic. It also suspends elections and referendums. There is no expiration date on the emergency powers.

Kim Lane Scheppele, a Hungary expert at Princeton University, told NPR that Orban is leading the way among likeminded world leaders in using the virus to push for more power:

“Bolsanaro in Brazil, Kaczynski in Poland…Trump in the United States, all of them have thought about using emergency powers. But no one has yet gone as far as Orban to really shut down democracy as anybody knew it in Hungary before.”