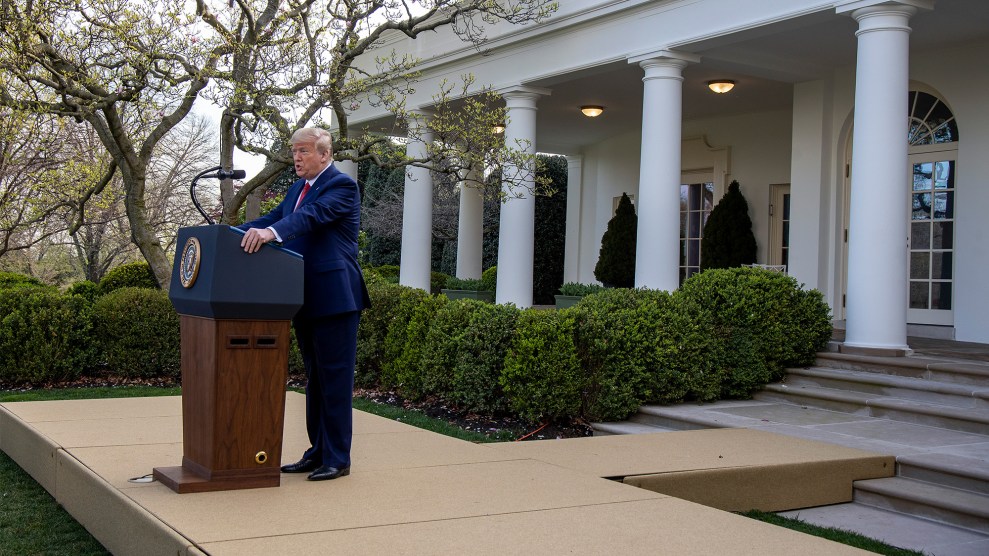 President Donald Trump, walking back from his earlier aspirations to ease restrictions on Americans by Easter, extended the national social distancing guidelines through April 30, adding that the deadliest spike could hit in two weeks—on Easter weekend.

“We know much more now” than when he made the Easter claim, Trump said during a coronavirus task force briefing on Sunday. “By June 1, we’ll be well on our way to recovery,” he added.

More than 2,300 people have died in the United States and at least 135,000 have tested positive for COVID-19 as of Sunday afternoon. New York, the hardest hit state with almost 60,000 cases, saw an increase of more than 7,000 cases in just one day. New York City Bill de Blasio told CNN’s Jake Tapper Sunday that “We have enough supplies to get to a week from today with the exception of ventilators. We’re going to need at least several hundred more ventilators very quickly.”

The White House’s extension of social distancing measures is in line with what some state governments are doing as the virus continues to spread. California for example, is strengthening its shelter-in-placer order by closing beaches and hiking trails as it prepares for an anticipated spike in hospitalizations.

Hours before the press conference Sunday, Dr. Anthony Fauci, the country’s top infectious disease expert, had said he believed the United States will see between 100,000 and 200,000 deaths from the coronavirus, and millions infected. Fauci said at the press conference that “it is entirely conceivable that if we don’t mitigate we could reach that number,” adding that extending the guidelines was the right move and the next two weeks are critical.

Throughout the hour-long press conference, Trump mentioned multiple times that the United States was “doing more tests than any other country in the world,” which is true by raw numbers, but not per capita. Trump said the Federal Drug Administration has approved testing that will provide “lightning fast results, in as little as five minutes.” Abbott Labs will provide 50,000 of those test daily, as early as next week.