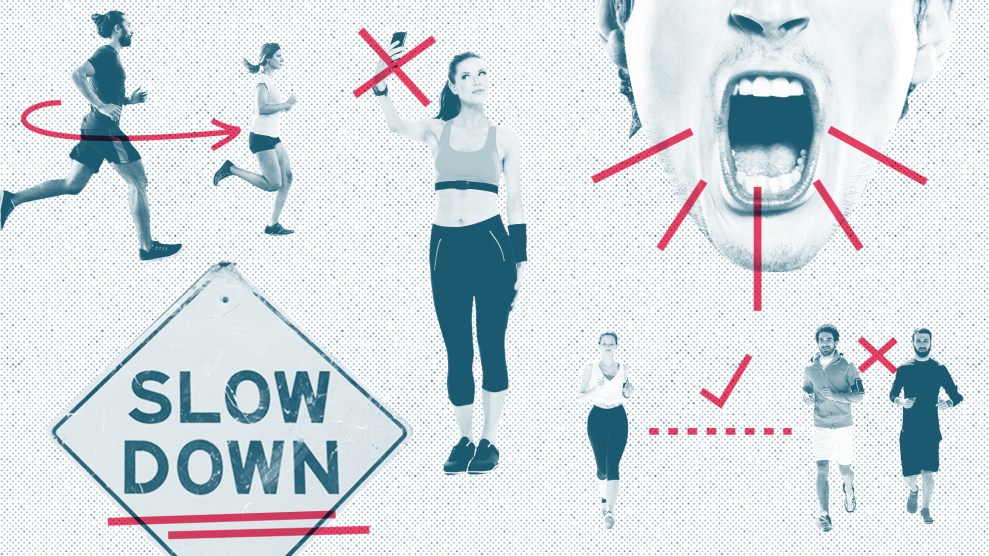 I run to relax. It is a peaceful time alone, in which all my anxieties and obsessive analyzing of the day take a backseat to simple action. In his book about running, Haruki Murakami compares it to raising a bar. I would say my version of running is becoming a bar—somehow transforming into a blissfully thoughtless object.

But, with the coronavirus pandemic, this has ended. Now when I run I feel like Larry David. I am all thoughts.

Every morning, as I trot in parks near Berkeley, I point and I argue. I quibble with strangers. I (kind of) yell. The refusal to follow the written rules of the shelter-in-place order, which allows outdoor exercise so long as everyone stays six feet apart from each other, has become an all-consuming annoyance in my former respite from society. I run with rage. My form, once focused on striking near the front of my foot and relaxing my arms, now centers on controlling wild arm gesticulations that aren’t for speed but for a purpose: Please move to that one side of the fucking path so we don’t get near each other!

My anger is not unique. Other people (including my boss) have pointed out that the privilege of being outside, of getting fresh air, is being tainted by people’s behavior in public.

I don’t know who needs to hear this—EVERY RUNNER IN AMERICA—but it is your responsibility to give a way wider detour around any pedestrian than six feet as you speed past them huffing and panting.

Yes, runners are in the way. We are a noticeable problem, probably because we’re moving more quickly, annoying more people per minute. Or maybe because gyms are closed (and thus more people are running, many stupidly), but streets are still open to traffic, leaving everyone getting out of their house sequestered to a few feet of sidewalk.

But sunrise walkers, who stop in the middle of the path to take a picture of a flower for their Instagram, are also a problem.

It’s everyone. Not just runners, young people, old people, hippies, finance bros, students, male viewers ages 13 to 34, or any other “type of guy.” It’s all of us. We, as a great nation, have come together—across all our various backgrounds—to refuse to be six feet apart. I have seen you, my fellow patriots of idiocy: the whole family walking in a horizontal line; the texter; the child, finally free of the indoors, who ran up to my leg; the walker of seven dogs; the heavy panting jogger passing within inches of me like it’s a NASCAR race; the elderly birdwatcher with a tripod across the whole route; the couple stretched across the park’s cement walkway like a blockade, with one of you on each side and a dog in the middle. I cannot pass you without being within six feet.

It is probably you too, reader, and I need you to stop!

I want to stop yelling, for the 200 meters leading up to you, random walker, “On your left!” without you budging an inch.

I want you, over-friendly runner, to stop huffing behind me like we’re training partners for the postponed Tokyo Olympics.

Why are we crashing the whole economy to stop people from dying if you, artist painting watercolors in the middle of a gravel path with a full easel, are going to roll your eyes when I ask, “Can you go to one side with that?”

My theory is that there’s a deep craving for normalcy that’s almost impossible to shake. We’ve been told that nothing can be the same—except you can still go outside. The outdoors is a small oasis. It’s hard for us to actually lodge into our minds that even the one thing that’s “normal” can’t be normal. One of the only pieces of life that feels like the Old Times, when our bodies take over our anxious minds, must be made anew in the light of the pandemic, too. We want to live in the past. We cannot.

(My other theory is that I live in Berkeley and share air space with anti-vaxxers or coronavirus truthers.)

Now, to my people, the runners: If you’re running, you should be more vocal and tell people you’re approaching. When passing, use some athleticism to veer, dodge, and create beautiful looping swirls to not be anywhere close to other folks. Don’t run with headphones if you’re in an even semi-crowded area, so you can appreciate the company of the people you’re avoiding. Take a few strides in the street to sidestep getting anywhere near people, if you can. Run during off-times. Slow down to circumvent. And it wouldn’t hurt to say thanks to those working to elude you.