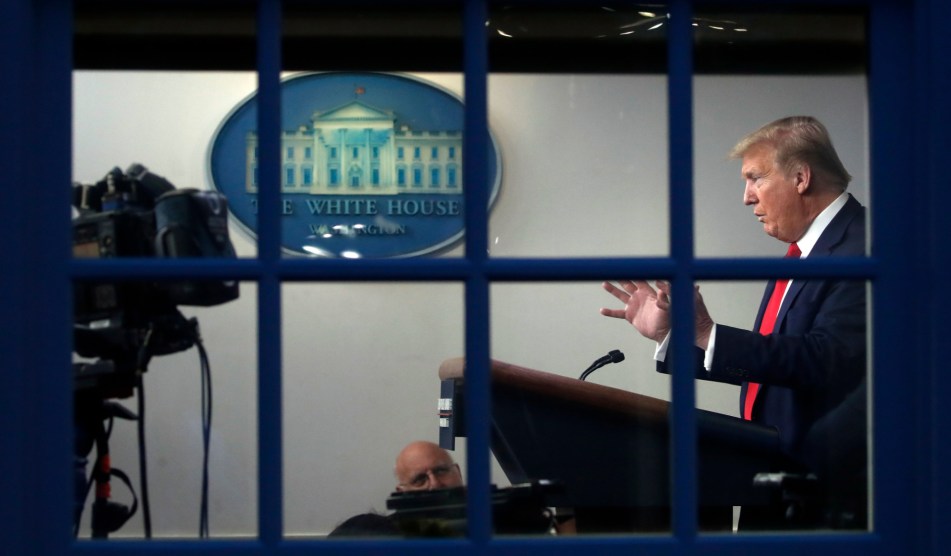 A day that began with President Trump tweeting “LIBERATE MICHIGAN!,” “LIBERATE MINNESOTA!,” and “LIBERATE VIRGINIA” ended with him saying outright in his daily coronavirus press briefing that Virginia’s Democratic governor “should be under siege.”

Journalistic custom requires us to pretend that this is not a call to insurrection but rather an unfortunate case of “rank partisanship.” But Trump on Friday evening left little doubt what he was getting at in the tweets. They were directed at three Democratic governors in three states that are battlegrounds only in the metaphorical sense, for now. He said that certain lockdown measures were “too tough.” But when pressed on his “LIBERATE” tweets he cited gun control legislation recently signed by Gov. Ralph Northam. As we’ve reported, those controls were long expected. In fact, they helped turn the state legislature blue in the NRA’s backyard.

“They want to take their guns away,” Trump explained of his tweets. “That’s the Second Amendment. That’s Virginia. You have a governor—I guess he should be under siege. He seems not to be. If he were a Republican, he would be under siege. But he seems to have escaped something that is really bad…So when you talk about ‘liberate’ or ‘liberation,’ you can certainly look at Virginia.”

Trump on his "LIBERATE" tweets basically calling for civil unrest in a number of states with Democratic governors: "I think some things are too tough." pic.twitter.com/v7ff67Fiac

It appears Trump was moved to write his “LIBERATE” tweets by a Fox News segment about protests outside the office of Minnesota’s governor. These were part of a string of recent demonstrations against state social-distancing measures. On Wednesday, fashy protesters with at least one Confederate flag blocked the streets outside Michigan’s state Capitol, chanting “Lock her up!” in reference to Gov. Gretchen Whitmer.

Asked about these protests, the president dismissed concerns that they might be creating risks of disease transmission. “These are people expressing their views,” Trump said, as if viruses observed the First Amendment. “They seem to be very responsible people to me. But they’ve been treated a little bit rough.”

Here, then, were the marching orders from Friday’s press briefing: be nice to the people defying a rule to help us all not die from the plague; lay siege to the governor of Virginia.