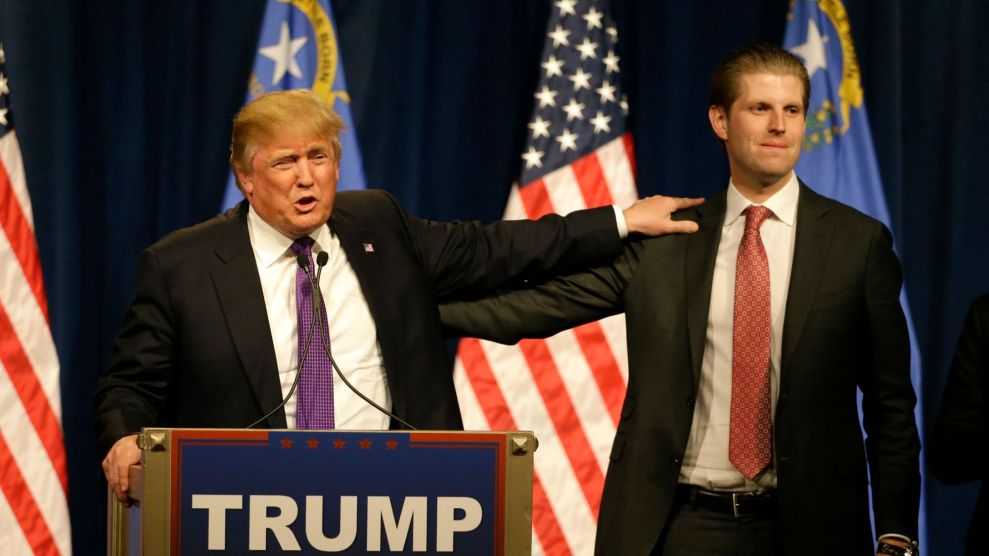 Donald and Eric Trump on the campaign trail in 2016Jae C. Hong/AP

Eric Trump made headlines this weekend with an outlandish accusation. Democrats, he claimed, are seeking to prolong coronavirus lockdowns in order to prevent his father from holding campaign rallies. It’s a version of a conspiracy theory that has become increasingly popular among the president’s supporters—and has been voiced even by Donald Trump himself.

The president’s middle son was interviewed Saturday on Fox News by Jeanine Pirro, a Trump loyalist who opened her show by declaring, “The Democrats see a silver lining in this: Instill fear, stop this country at all costs, and shut it down—destroy Donald Trump’s signature piece of his four years, the economy.”

“Biden loves this,” Eric Trump told Pirro. “They think they’re taking away Donald Trump’s greatest tool, which is being able to go into an arena and fill it with 50,000 people every single time…You watch, they’ll milk it every single day between now and November 3. And guess what: After November 3, coronavirus will magically all of a sudden go away and disappear, and everybody will be able to reopen. They’re trying to deprive him of his greatest asset.”

Eric Trump on his dad being unable to hold rallies b/c of a pandemic that has killed nearly 90k Americans: “After Nov. 3, coronavirus will magically all of the sudden go away & disappear & everybody will be able to reopen. [Dems] are trying to deprive him of his greatest asset.” pic.twitter.com/9ZGQw9H3JC

Eric Trump isn’t the only one promoting baseless conspiracy theories about Democratic governors using lockdowns to damage the president. While interviewing Vice President Mike Pence last week, Rush Limbaugh claimed that some blue-state governors “seem to have a political desire to inflict pain on your administration rather than get their states [reopened].”

President Trump made a similar assertion last week, when he suggested in an interview with the Washington Examiner that Roy Cooper, the Democratic governor of North Carolina, might delay the process of reopening his state in order to interfere with the Republican National Convention, which is scheduled to be held in Charlotte in late August.

Part of this seems to be projection on the part of a president who has attempted to use federal coronavirus aid as a means of rewarding his allies, punishing his perceived enemies, and extracting political favors and praise from the nation’s governors. Whether or not Donald Trump really believes what he’s saying may not matter. He’s now thrown his full weight behind MAGA protesters’ efforts to end social distancing orders across the country—turning the public health response to a disease that has killed nearly 90,000 Americans into a partisan brawl animated by outlandish conspiracy theories.