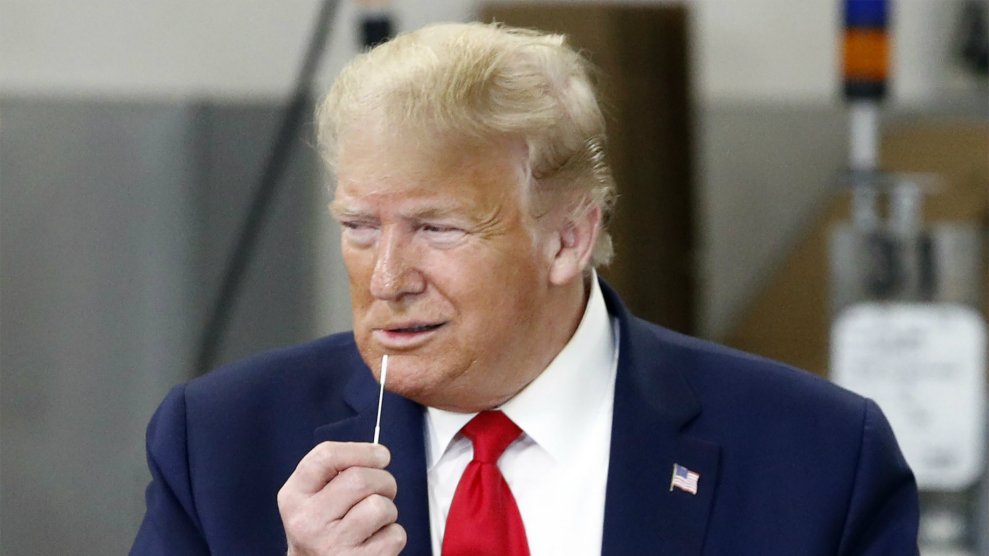 Two distinct videos went viral over the Memorial Day weekend. One was of crowds of people partying and drinking at an Ozarks’ pool resort in Missouri. The other was of a white police officer in Minneapolis, Minnesota, killing a Black man by kneeling on his neck for nearly nine minutes. George Floyd’s death sparked protests that would spread through the country and the world over the course of two weeks. It’s too soon to know how these two events might affect the spread of coronavirus. Nonetheless, the hand-wringing about who to blame when the disease surge arrives—the states that had reopened too early or the protesters—has become a kind of Rorschach test of political preference.

But that dichotomy misses the point.

There was never a comprehensive plan to stop the novel coronavirus from infecting millions of people, much less preventing more than 100,000 deaths in the United States. In the early days of the pandemic, Donald Trump insisted that it would just go away. His party and favorite television network blamed it on a Democratic plot to sabotage Trump’s reelection chances. Larry Kudlow, who is the Director of the United States National Economic Council and not an infectious disease expert, insisted the contagion was contained. And when in doubt, China and the World Health Organization were the perfect scapegoats. Meanwhile, state and local governments scrambled to close schools and businesses, and ordered everyone to stay home in an effort to limit the damage.

The federal government failed spectacularly to roll out a competent strategy to test and isolate the sick, and the country first slowly then suddenly shut down. As the unemployment numbers climbed, the government gave a portion of the population a $1,200 check for their troubles. Then, the nation and the world watched in horror as US hospitals were inundated with people gasping for air, our morgues overflowed with bodies, our food distribution lines circled around the block, and millions of people applied for unemployment as the jobless rate soared. It remains a spectacular display of government incompetence and an indictment of the entire American system.

It remains a spectacular display of government incompetence and an indictment of the entire American system.

But then there is the question about the uptick in cases, just when we thought we were “flattening the curve” and states were reopening. This week, according to the Washington Post, several states have seen an increase in coronavirus hospitalizations in the last two weeks, the typical incubation period for COVID-19 and the period of time that has elapsed since Memorial Day. Texas, which was one of the first states to ease restrictions, has seen a 36 percent increase in new cases since the holiday. In Arizona, hospitalizations have increased by 49 percent. And in Arkansas, hospitalizations are up by 88 percent during that same time period. Several states are warning that their hospitals could soon be at capacity. Did this result in a renewed government effort to address the crisis? Hardly. Just more of the same, tired blame game.

Not that this reflex is unique to the pandemic or to police shootings. It’s a tried and true American reaction. When faced with systemic failures, we look at individuals not the system. For Black people who live in poverty, it’s not the decades of racist policies that have left them with a decimated tax base and crumbling infrastructure, it’s their fault for not pulling themselves up by their bootstraps. Earth is warming at an alarming rate, bringing with it untold disaster. But instead of blaming decades of corporate pollution for profit, and the complicity of certain elected officials to make sure there are no consequences, we shame people who drink out of plastic straws and neglect to bring their own woven shopping bag to the store. When the coronavirus appeared, the vast majority of people, those whose livelihood did not depend on placing themselves in harm’s way, mostly stayed home, wore masks when they went out, and sanitized their hands regularly. And still, even though that individual action may have slowed the spread, without any aggressive government intervention, the renewed surge of the virus could be even more deadly than the first round.

The government’s lackluster response to the pandemic is rooted in a president who is actively hostile to science, the systematic defunding and dismantling of government bodies like the pandemic response team in the National Security Council, and Trump administration interference with and undermining of the work of the Centers for Disease Control. The once world-class agency has largely remained silent or been muffled. As a result, we’ve all been left to decide on our own which activities are safest and how to minimize risk while we navigate the world while COVID-19 still spreads. And because we’re following our own rules, with few accepted government guidelines, it’s only natural to see photos of people doing something you personally don’t think is safe and to blame them for the current state of affairs. If only they were quarantining like me, we wouldn’t be in this mess.

If only they were quarantining like me, we wouldn’t be in this mess.

Most public health experts agree that washing your hands, wearing a mask in public, and mostly staying at home is the best way to remain safe from COVID-19. But if you think everyone should stay home until there’s a comprehensive testing, tracing, and isolating strategy in place, you’ll be waiting for a long time. The Trump administration has not indicated that they’ll beef up the coronavirus response. In fact, it appears that they’re ready to move on and wage yet another culture war while Americans die by the thousands every week. As my colleague David Corn reported on Thursday:

[Trump] referenced the coronavirus crisis—”this horrible plague”—in his usual fashion: he defended his administration’s record on testing, and he blamed China for the pandemic. But he said nothing about the need to stay vigilant regarding masks, social distancing, and other countermeasures. (Trump even toured the plant without wearing a mask, and the swabs he watched being made in a sterile environment were later thrown out.) He said nothing about coronavirus remaining a serious threat to the United States.

If we weren’t in this unique moment, I might be inclined to believe that the predictable cycle of government incompetence and blaming individuals will continue indefinitely, certainly as long as Trump remains president and the Republicans remain in power. The government will fail to respond, hundreds of thousands of people will die, and we’ll accept it as just another facet of American life.

But for the first time in generations, a counter-narrative is beginning. There’s an uprising. More people are starting to realize that maybe there is something systemically wrong. A majority of Americans think the death of George Floyd represents a broader problem of policing. They’re realizing that we have the money to arm police officers with military equipment, but across the country people are forced to wait hours to cast a ballot. They see that the federal government can give corporations billions of dollars, but only offered a single payment of $1,200 to working people during the economic crisis, plus a temporary boost in unemployment benefits. It’s time to make the final connection and see that the same premise that there is something pervasively wrong with our system of policing also holds true for the pandemic.

Yes, there’s a crisis. But remember, fundamentally, we only have the government to blame.