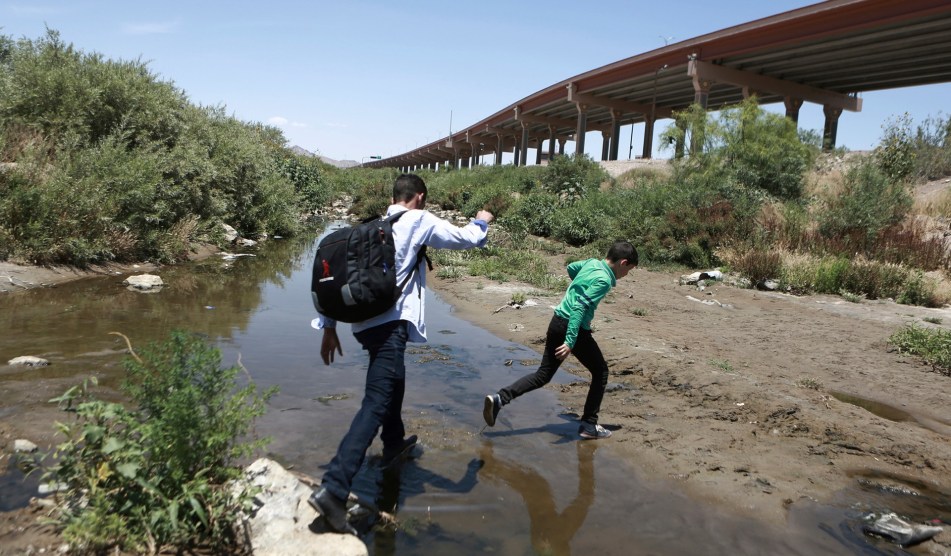 Two children cross the Rio Grande into the United States to turn themselves over to authorities and ask for asylum. June 2019.AP Photo/Christian Torres

The Trump administration is facing the first legal challenge of its policy of turning away thousands of asylum seekers at the southern border—including unaccompanied children—during the coronavirus pandemic.

The ACLU and others filed a lawsuit in federal court Wednesday on behalf of a 16-year-old Honduran boy who was set to be deported after coming to the United States last week to flee persecution at home. A federal judge temporarily blocked the deportation, however, following the filing of the suit.

The government’s move to deport the boy was in line with an emergency order issued by the Centers for Disease Control and Prevention that suspended immigration into the country as a way to prevent the spread of the coronavirus. But the ACLU is arguing that the boy’s expulsion from the country would violate anti-trafficking laws and special protections afforded children seeking asylum.

The CDC order was issued in March—and extended indefinitely—ostensibly as a measure to protect the health and safety of Americans. But it has effectively shut down the immigration and asylum systems at the southern border. In recent months, thousands of asylum seekers have been turned away there, and the Office of Refugee Resettlement, which would normally house minors while they are being placed with family members or sponsors, has seen a dramatic decline in new immigrants entering its care—just 58 for the month of April, according to BuzzFeed News.

Immigrant advocates say that the Trump administration is merely using the pandemic as cover to push through its draconian immigration policies. As Andrea Flores, deputy director of immigration policy for the ACLU, told my colleague Fernanda Echavarri last month: “The president is hellbent on exploiting a public health crisis to achieve his long-held goal of ending asylum at the border. He’s also doubling down on fear-mongering against immigrants, so many of whom are essential workers during this crisis. Do not be fooled: Trump’s goal is not to protect our health, it’s to sow division and advance his political agenda.”