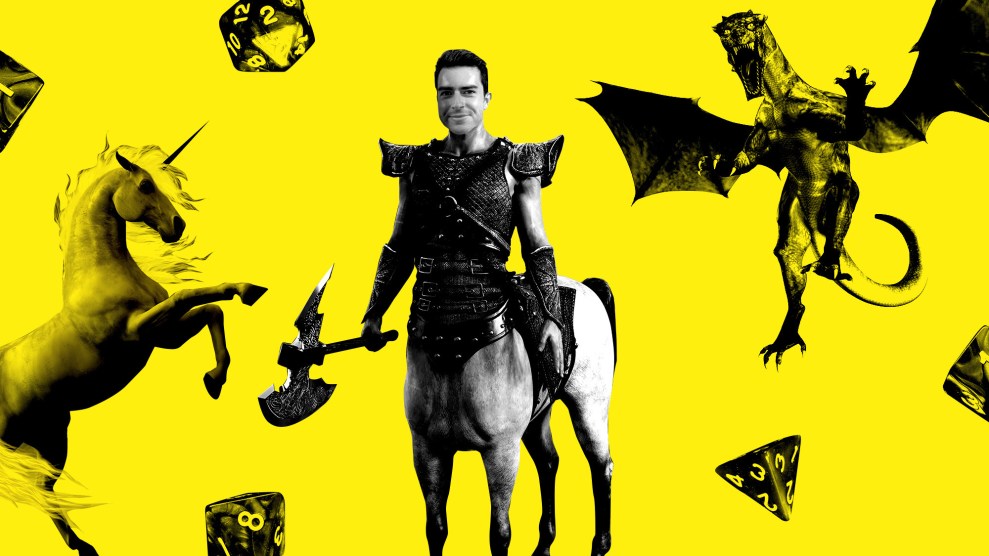 On Friday evenings, after 9 p.m., I’m referred to strictly as Vernal Pool, the druid water genasi, by some old high school friends, and—for a few hours—everything makes sense. Challenges are straightforward and accomplished in tidy, three-hour blocks. Enemies are dealt damage and, eventually, perish. Surprises are choreographed. Randomness is present but bounded—nothing more than the probabilities suggested by a virtual 20-sided die.

In Dungeons & Dragons, everything pretty much goes as planned.

In the real world, the pressing themes—pandemic, climate change, state-sanctioned brutality, the government’s emphatic disinterest in functioning properly—lend themselves to a darker, more surreal plot. It is serious. We’re holed up in our homes. The absence of bars, physical workspaces, and cheap baseball tickets from our lives creates a sense of confused inertia. Are we a tenth of the way through the pandemic or halfway? Are we actually getting anywhere, or are we stuck in the last season of Lost? There is endless horizon in every direction—we’re measuring our time in hair growth, if at all.

D&D, on the other hand, is full of clear lines and brighter absurdities. I’m on my 18th session; I live in a tower on the outskirts of a village called Goosetown. Like real life, much of what goes on isn’t scripted. But, unlike reality, it’s safely self-contained. In a session of D&D, the cocktail of youth nostalgia and fantasy otherworldliness could give rise to almost anything—as long as it abides by the game’s few rules. It isn’t the leap into unbounded fantasy that appeals; it’s the lines, the structure, the finitude (with a sort of community working within them).

I’m not the only one investing in imaginary feudal real estate. Twitter is awash with memes about the game. The /r/DnD subreddit has added half a million subscribers this year. It’s impossible to know the motivations of those people, but surely at least a few killed their plants and realized baking is hard. Before the pandemic, D&D might seem an escapist anachronism to outsiders: the cartoon fantasy box art, the 1970s nerd zeitgeist, the plot milestones important to no one but your group of dorks. You are in your friend’s basement—carpet shagged and air conditioned—collectively imagining a confrontation with a band of goblins or kobolds (goblins, but reptilian!).

But, in playing, I’ve found another side of D&D. Traditionally, we think of such games as a way to escape society into another universe. I was finding that it, actually, became a conduit back to a semi-normal life. The game provided the comfortingly rigid rules of a society, and the room to experiment, cooperate, and play with friends. It was drawing me into the “real world”—at least what it should be.

That was the intention. In 1974, when Gary Gygax and David Arneson created the first edition of Dungeons & Dragons it was part of a broader game revolution.

In the 1950s, wargames (which are what they sound like, strategy games that simulate warfare, putting players in control of armies destined to destroy each other, with an emphasis on realism) had dominated the board game industry. Companies had capitalized on the post–Word War II glamorization of the battlefield. The company Avalon Hill released the popular Gettysburg, which allows players to recreate the 1863 battle that was the turning point of the American Civil War. America—high on the sweet fumes of victory—enjoyed playing out its selective past to confirm a trajectory bending it toward a future that World War II had validated: status as the greatest country ever.

Then, in the mid-1960s, two things happened. Gamers began to experiment with new structural elements (like narrative and playable nonmilitary characters) and add objectives beyond sheer brutal domination. And a counterculture obsessed with the future as a utopia emerged. The “opposition to the Vietnam War and militarism,” writes Texas State University professor Joseph Laycock in his 2015 book, Dangerous Games: What the Moral Panic Over Role-Playing Games Says About Play, Religion, and Imagined Worlds, “inspired interest in noncompetitive games.” The New Games Movement surfaced too. It brought outdoor games that “emphasized play for the sake of play” instead of winning. (One example: a tug-of-war-like game where players would switch teams when one side looked close to capitulating, to ensure the game could continue.) The same people questioning the government as war machine wondered why every fun activity had to be about violently opposition with your friends too.

In this milieu, war games evolved into “role-playing games.” Players would control single avatars rather than armies, work collaboratively rather than competitively, and put emphasis on storytelling rather than tactics.

Enthusiasts like to point out that titles within the new genre, including D&D, might not actually be games—but rituals. This distinction in the RPG world has been written about ad nauseam. But, with good reason. In the shift from wargames to RPGs, players began working together toward a common goal: kill the dragon, trick the wizard, complete the quest. According to French structural anthropologist Claude Lévi-Strauss, whose work is the basis for this argument, having a common goal is the threshold that moves an activity from game to ritual. He writes in his 1962 book, The Savage Mind:

Games thus appear to have a disjunctive effect: they end in the establishment of a difference between individual players or teams where originally there was no indication of inequality. And at the end of the game they are distinguished into winners and losers. Ritual, on the other hand, is the exact inverse; it conjoins, for it brings about a union (one might even say communion in this context) or in any case an organic relation between two initially separate groups.

Off this, writer Paul La Farge makes an interesting proposition in his excellent 2006 Believer essay, “Destroy All Monsters,” that D&D fulfilled its fundamentally hippie countercultural project: “Show people how to have a good time, a mind-blowing, life-changing, all-night-long good time, by cooperating with each other!”

If the 1960s were spent fawning over a utopia peaking on the horizon, the 1970s were a painful reckoning with the fact that it was always just a fata morgana. In quick succession, the decade piled on assassinations, Nixon, the failed Vietnam misadventure, recession, and the inklings of a coming neoliberalism. For millions of people, the American superstructure long deemed reliable was swiftly proven to be vulnerable, even impotent. It’s difficult to say whether the greasy teens and college students playing D&D were acutely disillusioned with those things. Either way, in the shadow of the decade, their ranks grew. According to Laycock’s book, by 1979 there were an estimated 300,000 players.

That makes me wonder if, despite the clear and present threats, the appeal of D&D for my group isn’t far off from the appeal it had 40 years ago. It wasn’t just an escape from the rules of reality, but it offers a sense of security there are rules at all.

In D&D, the rulebook is present and accessible, and not waylaid by random forces beyond the circle of players poring over it. “The rules are guaranteed,” LaFarge writes, “unlike the implicit, arbitrary, and often malign rules that people live by in the actual world.”

When our band of “good guys who always win” was assembled in mid-March with a public Facebook post, I had no guardrails. Weekends had become a cavernous, daunting social void. Most of my roommates were waiting out the quarantine with their families.

Now, I know what to expect. It’s dumb. But also clear. Zooming people I haven’t spoken to in years, I know our attempt to heist a band of dwarves who run a criminal syndicate in the eclectic trade city of Keaton (a “patchwork quilt knitted by a dozen different people with very conflicting ideas about how the quilt ought to look” that the dungeon master imagined into existence like an hour before our meeting) has understandable steps. To infiltrate the criminal hideout, we’ll need shapeshifting and charm spells. Still, there’s mystery. Somehow, we created an intra-organization uprising along the way, before escaping with a pirate guide named Cid Citrus aboard our giant flying manta ray. It is as radically dorky as it sounds.

There are seven of us, a group of childhood friends I’d spent countless hours playing video games with, fueled by soda and sleepover energy. Before, we’d lost touch. Correspondence relaxed to belated birthday wishes or nostalgia-fueled (but fruitless) suggestions that we catch up. Nothing stuck. But for the last four months, we’ve been gathering with purpose: to accept quests and kill the undead and explore a world that Greg, our dungeon master, has created for us. It’s all familiar enough to bring childhood close, and new enough not to feel regressive. As we navigate this unambiguous world, our sessions don’t just advance the plot of D&D. Our conversations drift to how we’re managing the circumstances of the world, or little anecdotes on how we’ve spent the years apart. Better than hair growth, better than Twitter, that has become how I measure the passage of time.