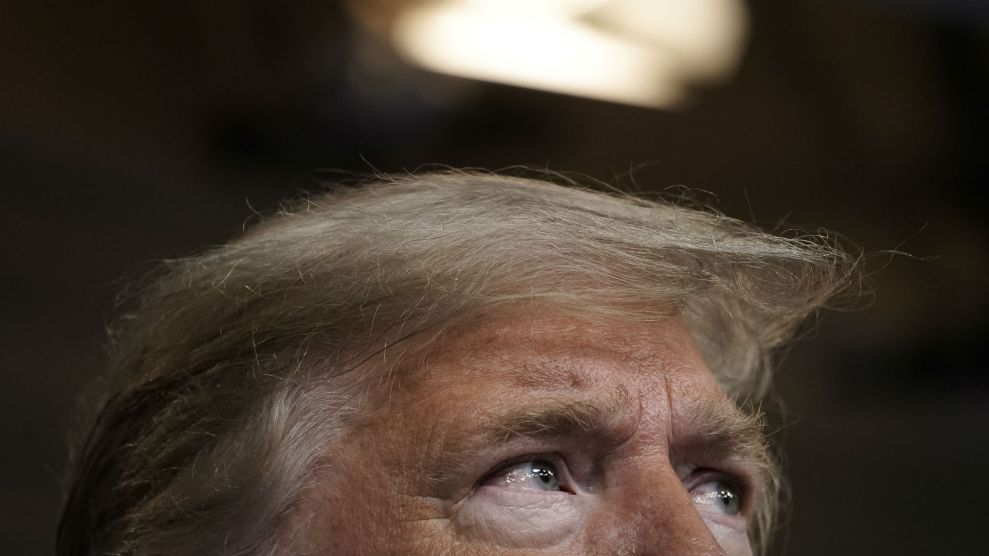 Shortly after returning to the White House on Monday after a three-day stay at Walter Reed Medical Center, President Trump ditched his mask and filmed a 90-second campaign-style video telling us the coronavirus, which has sickened tens of millions worldwide is actually no big deal: “I learned so much about coronavirus,” the president said. “And one thing that’s for certain, don’t let it dominate you. Don’t be afraid of it.”

He added, “We have the best medicines in the world” and “the vaccines are coming momentarily.”

In essence, his message to the American people is, don’t worry about the coronavirus—go on with your lives!—because our “miracle” medicines will protect you. He is even now fundraising off this message, my colleague Abigail Weinberg reports.

But the truth is, there are no FDA-approved treatments specifically for COVID-19. A few therapies have been granted “emergency use authorizations” for hospitalized patients, and while the research behind them is encouraging, these drugs and others are far from being the medical wonders Trump is trying to sell.

The president’s COVID infomercial, therefore, is a distraction from the bigger picture: Trump’s failure to act is killing Americans. As Mother Jones has chronicled in detail, Trump has repeatedly:

His recent comments are simply an extension of that message. Like the pandemic, Trump’s sickness was something that would, in his reality, disappear with little explanation: “Two days ago, I felt great. Like, better…than 20 years ago,” he said, thanks to therapeutics that are like “miracles coming down from God.”

But even before his diagnosis, unproven treatments have always been the president’s answer to the pandemic: First, it was malaria drug hydroxychloroquine, then convalescent plasma, and, now, promises of a vaccine. (Though, as my colleague Kiera Butler writes, even a vaccine is unlikely to be a “silver bullet”: “Rather, it will be one more weapon against the disease to add to our arsenal.”)

Worse, his VIP treatment plan, including a buffet of cutting-edge experimental therapies, is something that’s unavailable to nearly every other COVID-19 patient.

Worse, his VIP treatment plan, including a buffet of cutting-edge experimental therapies, is something that’s unavailable to nearly every other COVID-19 patient. One of those therapies, for instance, is Regeneron’s lab-grown antibody “cocktail,” which has shown promising results in an analysis of 275 patients, but hasn’t yet received emergency use authorization from the FDA to treat COVID-19. According to the Washington Post, it has been administered to fewer than 10 people outside of a clinical trial. On top of that, as the Post points out, the president traveled about nine miles from the White House to his private hospital suite via helicopter, where an entire team of doctors looked after him. And even now, convalescing at “home,” he has access to unparalleled care.

Other medicines on Trump’s treatment plan reportedly include the antiviral drug remdesivir and the steroid dexamethasone—both of which are more accessible (though in the case of remdesivir, “supplies are limited,” according to the National Institutes of Health), and have large randomized controlled trials to back them up. The president has also reportedly taken famotidine, an antacid typically used to treat heartburn, Vitamin D, and Zinc, all of which are unproven COVID-19 therapies, though it’s unclear if these medications are part of his ongoing treatment.

“This is the President of the USA. He is going to get the kitchen sink thrown at him medically, offered all there is—whether it’s authorized under emergency use or not, in the case of the antibody treatment,” epidemiologist Dr. Seema Yasmin told CNN. “But then there are (almost) 210,000 Americans who have died over the past few months because the pandemic response has been so bad. And they certainly didn’t get access to this kind of treatment.”

This isn’t just a bad look. It’s shoddily crafted fiction. Donald Trump basically told the rest of us—who do not have access to the world’s top-tier medical resources—that we have nothing to fear from this virus because “you’re gonna beat it.” Clearly, not everyone beats COVID, and the president saying so is reckless. It’s sort of like telling people in the midst of a climate crisis to not worry because “there is plenty of great housing away from the coasts!”

Trump had an opportunity to show real compassion and empathy for the other patients who have developed COVID-19, and, perhaps, to urge Americans to abide by the key recommendations that have been proven to actually work, and are inexpensive and widely available: social distancing and mask wearing. Instead, he basically suggested that the 210,000 people who have died in this country from the coronavirus did so because they weren’t…tough enough?

Medical experts have already pointed out how careless this idea is. “Are you kidding me?” tweeted UC-San Francisco department of medicine chair Dr. Robert Wachter. “After 210,000 deaths in the U.S. & 1 million deaths worldwide? This either shows a breathtakingly callous, inhumane & counterproductive attitude, or he has altered mental status.” Harald Schmidt, an assistant professor of medical ethics and health policy at the University of Pennsylvania told the New York Times, “I am struggling for words—this is crazy. It is just utterly irresponsible.”

It’s sort of like telling people in the midst of a climate crisis to not worry because “there is plenty of great housing away from the coasts!”

Nevermind the rallies and Rose Garden ceremonies and donor events Trump held, or his insisting that people around him don’t wear masks or conduct contact tracing: If you ask the president, contracting the coronavirus is a symbol of leadership, not a lack of it. In a rambling portion of his video update, the president, sounding very much like someone who had just ingested a concoction of drugs, said, “We’re going back—we’re going back to work. We’re going to be out front. As your leader, I had to do that. I knew there’s danger to it, but I had to do it. I stood out front. I led. Nobody that’s a leader would not do what I did. And I know there’s a risk, there’s a danger, but that’s okay—and now I’m better, and maybe I’m immune! I don’t know.”

For now, we’ll have to wait and see if this backfires politically—and even, perhaps, medically. Aside from the known side effects of these drugs, doctors, including the president’s own physician Dr. Sean Conley, acknowledge that it’s uncertain what effect mixing them all together will have. “We’re in a bit of uncharted territory when it comes to a patient that received the therapies he has so early in the course,” Conley said during a briefing with reporters Monday.

But, Conley added, “[He has] 24/7 world-class medical care surrounding him down there. We’re not going to miss anything.”