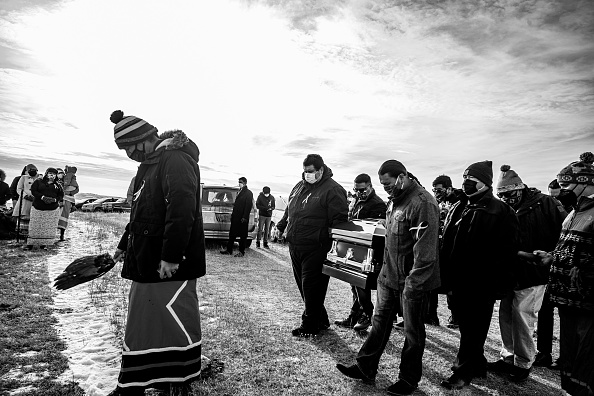 Tribal members at the burial of a husband and wife on the Standing Rock Indian Reservation, December 2020. Richard Tsong-Taatarii/Getty

Covid is killing Native Americans at a faster rate than any other community in the United States, shocking new figures reveal.

American Indians and Alaskan Natives are dying at almost twice the rate of white Americans, according to analysis by APM Research Lab shared exclusively with the Guardian.

The true death toll is undoubtedly significantly higher as multiple states and cities provide patchy or no data on Native Americans lost to Covid. Of those that do, communities in Mississippi, New Mexico, Arizona, Montana, Wyoming and the Dakotas have been the hardest hit.

The findings are part of the Lab’s Color of Coronavirus project, and provide the clearest evidence to date that Indian Country has suffered terribly and disproportionately during the first year of the deadly coronavirus pandemic.

The losses are mounting, and the grief is accumulating.

“Everyone has been impacted. Some families have been decimated. How can we go back to normal when we’ve lost so many after so many layers of trauma? It’s unbearable,” said Amber Kanazbah Crotty, a tribal council delegate in the Navajo Nation.

On Tuesday, the former Navajo president and Arizona state representative Albert Hale died from Covid, bringing the tribe’s death toll to 1,038, the equivalent of losing one in every 160 people on the reservation.

The figures show that even though multiple more infectious variants are yet to take hold in the United States, the situation has already wrought a devastating toll on Native communities and may get worse.

Last month was the deadliest so far in the US, with 958 recorded Native deaths – a 35% increase since December, a bigger rise than for any other group. For white Americans, deaths rose by 10% over the same period.

“Not only do Native people have the highest rate of Covid deaths, the rate is accelerating and the disparities with other groups are widening. This latest data is terrible in every way for indigenous Americans,” said Andi Egbert, senior analyst at APM Research Lab.

There are 574 federally recognized American Indian tribes and Alaska Native Villages in the United States. The Navajo Nation, the second largest by population, has suffered the greatest number of deaths, but smaller tribes are facing insurmountable losses.

In Montana, the Northern Cheyenne tribe has lost about 50 people to Covid so far – which is 1% of the reservation population of 5,000 people.

“Our collective grief is unimaginable. Losing 1% of our people is the equivalent of losing 3 million Americans. Native Americans are used to dying at disproportionate rates and we’re used to scarcity but Covid is different, there’s a growing sense of hopelessness,” said Desi Rodriguez-Lonebear, an assistant professor of sociology and American Indian studies at the University of California.

Rodriguez-Lonebear added: “I fear the long-term impacts on mental health, our children, community resilience and cohesiveness. We’re in the middle of a massive storm and we’re not prepared for the aftermath.”

About a quarter of those who have died were native Cheyenne speakers. The tribal clinic is currently receiving 100 vaccine doses a week, at which rate it will take almost a year to vaccinate everyone.

“Our language, culture and traditions is what makes us Cheyenne, but we’re losing our teachers. How am I going to teach my son when I still have so much to learn? Indigenous communities are facing a cultural crisis that other communities are not.”

n Oklahoma, the Cherokee Nation, the country’s biggest tribe, has suffered a relatively low death count thanks to a well-functioning tribe-led health service and a public health system that has pushed testing, contact tracing and consistent science-led messaging from day one, according to Chief Chuck Hoskin.

“We have one of the best public health systems in the country, which allowed us to be nimble when the worst crisis in modern memory struck … We’re a society, unlike the wider US, which believes in our citizens having access to healthcare at no costs,” said Hoskin.

Still, there have been significant losses. At least 35 of the remaining 2,000 fluent Cherokee speakers have died from Covid, undermining an ambitious program launched in 2019 to stop the language dying out.

As a result, tribal leaders decided to prioritize fluent speakers, alongside frontline workers and elders, and about half have now been vaccinated. Overall, almost one in 10 citizens on the reservation have been vaccinated.

“So far we’ve led this country in getting the vaccine out in an efficient and effective way. The only question now is whether the US can keep up with the Cherokee Nation,” Hoskin added.

Anecdotal evidence from across the country suggests that tribal vaccination programs, which can include mobile clinics, home visits and drive-throughs, appear to be running more efficiently and effectively than in many states, though shortages are widespread.

Amid growing debate and concern about vaccine hesitancy in communities of color, the Urban Indian Health Institute (UIHI) conducted the first ever national survey to better understand Native Americans’ knowledge, attitudes, and beliefs.

About 75% of participants said they would be willing to receive a Covid vaccine – compared with just 56% of the general US population according to one large survey in December 2020. The vast majority view getting the vaccine as a community responsibility, even though three-quarters have safety concerns. The survey included American Indians and Alaska Natives across 46 states – representing 318 different tribal affiliations.

“The results show the danger in grouping all people of color together when deciding on public health messaging to overcome Covid vaccine hesitancy,” said Abigail Echo-Hawk, director of the national tribal epidemiology centre based in Seattle.

The findings, published last week, have since been incorporated into a public health campaign called “Be a Good Ancestor”, focusing on community responsibility over individualism.

Joe Biden’s national Covid strategy lays out plans to bolster federal resources to speed up the vaccine rollout in Indian Country, as part of the administration’s efforts to improve equity.

Overall, there is no race data for about 42,000 of America’s Covid deaths, which means we do not know the ethnic background of one in 10 people killed by the virus so far, according to the researchers. Perhaps 700 or more Native Americans are likely to be missing from the data.

“The structural racism in the data collection systems makes us invisible by hiding deaths, which perpetuates inequalities and leads to further deaths in our communities, as this information is used to allocate resources,” said Echo-Hawk. “The maze of missing data is part of the genocide that continues to be perpetrated against our people. Their final stories are being lost.”

The data issues have not been fixed over the past year. Instead, the same gaps are now hampering our understanding about the vaccine rollout: almost half the race and ethnicity data is missing from the vaccine recipients, according to the CDC, thwarting efforts to ensure equitable access and accountability.

In states with patchy or no data, it is extremely hard to know whether states and counties allocated vaccine doses for indigenous residents are using them appropriately.

Tribal leaders and health experts agree that while the excessive death toll is shocking, it’s hardly surprising given the chronic structural, economic and health inequalities – such as overcrowded housing, understaffed hospitals, lack of running water and limited access to healthy affordable food – resulting from the US government’s failure to comply with treaty obligations promising adequate funding for basic services in exchange for vast amounts of tribal land.

After centuries of broken promises, expectations are high given that Native American voters helped Joe Biden win crucial swing states including Arizona, Wisconsin and Nevada to take the White House.

On Wednesday, Biden approved the Navajo Nation’s disaster declaration, which will result in additional federal resources for the tribe as Covid rates again climb.

But longstanding inequalities require transformational changes, and experts are calling on Biden to fully fund the Indian Health Service, for the first time in history, which would enable the yet-to-be-nominated new director to reduce chronic health disparities that have contributed to the high death toll.

“Native people showed up for Biden-Harris. Now it’s time to show up for them,” said Echo-Hawk.