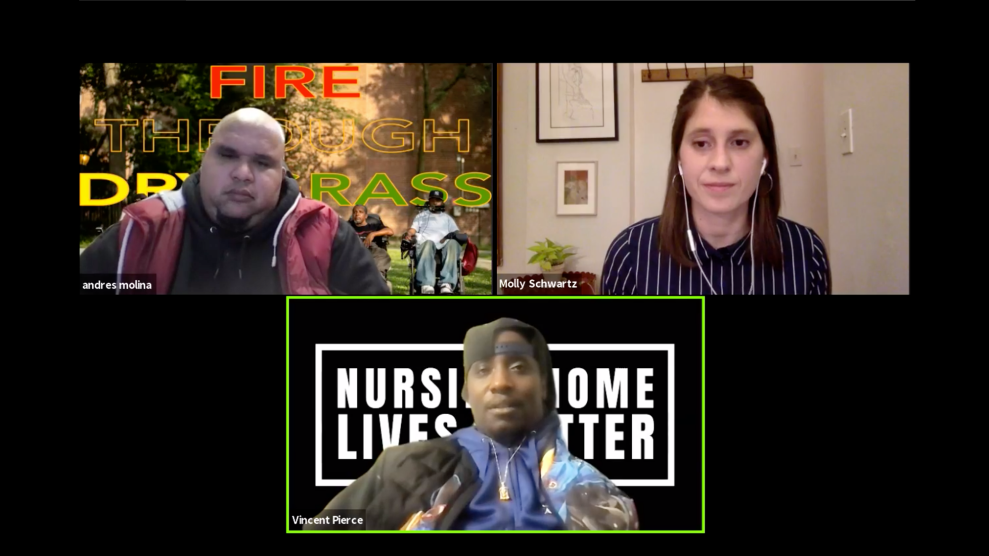 This week, I published a story about how the pandemic has prompted residents at Coler Rehabilitation and Nursing Care Center to speak out about what they’ve gone through during the various surges of the contagion. Many Coler residents have been infected by the coronavirus. Many have died. They’ve been on lockdown for months on end, sometimes unable to leave their rooms. They’ve had to fight for protective measures against the virus, like proper PPE, frequent testing, and isolation of COVID patients.

Last night, I got the chance to interview Vincent Pierce and Andrew “Jay” Molina—two residents whose voices have been the strongest in asserting the rights of Coler residents—for a Facebook Live event. Neither of them fit the image of what one would think of as a traditional, elderly, nursing home dweller. Pierce is 34-years-old and paralyzed from the neck down. Molina is 43 and restricted to a wheelchair because of a lung disease. But they share a commitment to spread awareness about disability rights, the impact of the pandemic on nursing home residents’ physical and mental health, and what nursing home administrators could do better.

Over the summer, during the racial justice protests, Pierce founded the Nursing Home Lives Matter movement as a way to advocate for rights of nursing home residents he believed had been ignored during the spread of the coronavirus. He wanted them to play more of a role in the decision-making that affects their health and well-being. “I was hesitant at first, because I would be afraid of any type of retribution from the administrators,” said Pierce. “But then I realized somebody has to really speak up from inside, and who else but me? No one else is gonna do it, and I felt like it was time.”

Molina is the co-director of an upcoming documentary, Fire Through Dry Grass, about the spread of COVID inside Coler when the New York City was overwhelmed by the pandemic last March and April. He was prompted to start filming after an infected patient was moved into his room at Coler. Despite Molina’s rare lung condition, Coler administrators refused to move the patient out. A COVID patient was also moved into the room of Ray Watson, a fellow resident and Molina’s friend. Watson caught the virus and died.

“When that happened, I said enough is enough,” Molina told me during the event last night. “We have to say something. I am a filmmaker, so that is the way I know how to express myself.”

Pierce and Molina were broadcasting from inside the nursing home where they’ve been on lockdown for the past 10 months. In the background you’ll hear some bleeps from medical machinery and nursing staff talking in the background. (It was my first time doing one of these, so please excuse my inability to speak to the camera. Zoom can be tricky like that.) “I would hope everyone that’s watching that has anyone living inside a nursing home, join the movement and let this be heard across the country,” said Pierce at the end of our conversation. “Nursing home lives matter.”