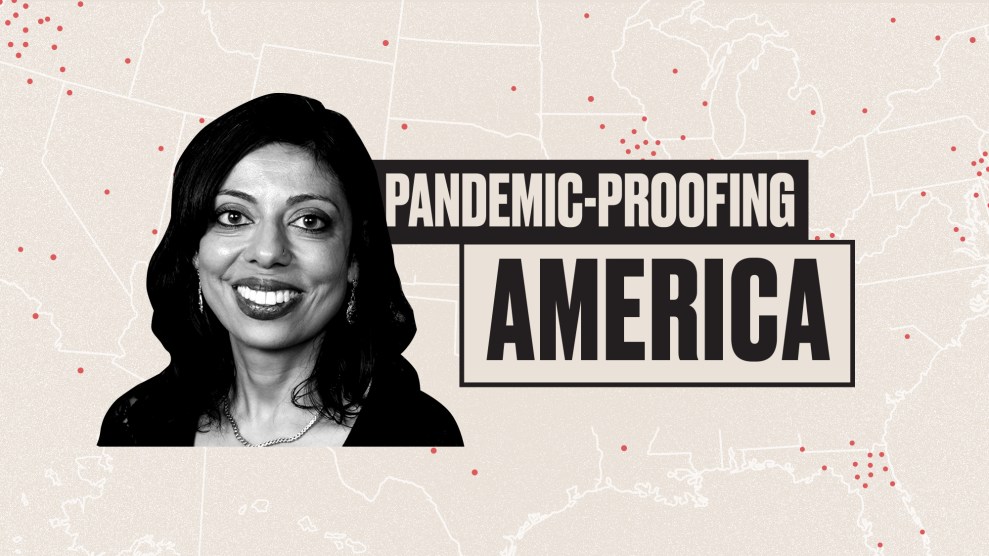 After a year that, for must of us, has been a blur of panic-inducing headlines, good news about the coronavirus sounds like an oxymoron. Monica Gandhi, an infectious disease specialist and the associate division chief of the Division of HIV, Infectious Diseases, and Global Medicine at UCSF/San Francisco General Hospital, wants to change that. After decades of working on the HIV epidemic, Gandhi has learned that fear-based messaging isn’t always effective, and she hopes to help the public health community learn from past mistakes rather than repeating them. Her prolific Twitter feed is full reasons to be hopeful, even as the pandemic persists. But she’s no Pollyanna. “I’m not a fake optimist,” she says. “I’m just looking at data dispassionately.” I reached out to her to talk about the fourth wave, vaccines and variants, and how optimistic messaging could actually help slow the spread of the virus.

On the lessons from HIV that we should be applying to COVID-19: We learned about not using shame-based messaging. [Yet we’re still saying] “Look at all these young people on the beach, how awful that they want to kill the elderly.” [From HIV] we learned a lot about fear-based messaging—that it didn’t work. “You’re gonna die if you do this.” No! “Let me tell you how to keep yourself safe.” There were ways to say: “I am so sorry you miss your family so much. Let me tell you some ways to stay safe and still have some family time.” We have not put that all together. Instead, the message was, “Stay at home.” I think it’s because we’re hoping that people will be scared to death. It works for some people, but it sure has led to a lot of anxiety and depression, where we could have been more nuanced.

On the coming fourth wave of COVID-19: The data is really clearly showing us two things: One is that as cases rise in some states, hospitalizations, luckily, are not rising as much. The other is that those who are getting severe disease are those who aren’t vaccinated yet. So I find this surge fairly different from any other, where you could predictably say, “Oh, this many hospitalizations per case, let’s prepare for this terrible onslaught.” Two countries [the United Kingdom and Israel] are ahead of us in vaccination rates, and we are seeing encouraging signs in both of them. Importantly, in Israel, the cases were going up in January. Then, there was this moment when the vaccine stopping transmission caught up with the cases. Then the cases just came tumbling down. So all we have to do, in my mind, is just look at data in the two countries ahead of us. Everything is looking different and better.

On immunizations and variants: There are two arms of the immune system: There are antibodies that kind of go up and down, and there are T-cells that generate a super complex response. Why did we not think about this before? Because it’s hard to measure T-cells. It requires flow cytometry [highly specialized equipment used to analyze cells] in a big lab, so there were only a couple of studies on this. And luckily, they’ve been released in the last three weeks—one was just last week!—[and revealed] that our T-cells are going to work against those variants. I’m not too worried about [the variants escaping from vaccines]. I think about T-cells a lot, because I’m an HIV doctor, and we hate T-cells going away. That’s what HIV does—it hurts our T-cells.

On the importance of global access to vaccines: This is simply not an infection that we can ever just get through without thinking about the rest of the planet. Vaccine equity has always been an incredibly important principle of infectious disease. But this couldn’t be any more urgent, because unlike any other time in history, we’re rolling vaccines out in the middle of a pandemic. Each place in the world can threaten progress in every other. The United States can really be a world player on this. We haven’t yet, but we can change in a lot of ways. I think we should join the WHO COVID-19 Technology Access Pool, which allows other pharmaceutical companies and other countries to have the formula for vaccines. And the vaccine doses that we don’t need—give them away. This should be a constant, ongoing conversation—that we’re all in this together.

“There has never been a time that I remember when there was a national reckoning with systemic racism going on at the same time as an infectious disease outbreak.”

On vaccine equity in the United States: There has never been a time that I remember when there was a national reckoning with systemic racism going on at the same time as an infectious disease outbreak. This is the time to apply that reckoning with systemic racism to our response, which would be mobile vans and increased community access and having members of Black and Brown communities be the ones who convey the message. We need to take time out to ensure that we’re not just putting out vaccines in a way that white people and rich people can come in and get them. Those two things are colliding in the United States at once; we have to put them together.

On combatting vaccine hesitancy: Sometimes it’s just a matter of people who represent communities doing the messaging. The Tyler Perry campaign was really powerful, as was [Moderna vaccine lead scientist] Kizzy Corbett, an African American, talking about how she developed the vaccine. And Dr. Fauci joining with Lin-Manuel Miranda to do a campaign. We’ve learned this in HIV. We actually never had, a white man message to the Black community. (Well, we did at the beginning, but then we stopped.) This is the time to take all those innovative lessons from HIV. We need white male Republicans, many of whom, at the national level have gotten vaccinated—I think almost all of Congress is vaccinated. They didn’t decline it. I also think that we’re overblowing vaccine hesitancy a little bit. The more people who get a vaccine—then you have a friend and a neighbor and your family member. All these people have had it, and they’re fine. They’re safe. It’s effective. So I’m not as worried as others about that.

On applying the lessons from this pandemic to the next one: We get to learn from two pandemics, HIV and COVID. And what we would want to do with COVID is unlearn a lot of the things we did [with HIV]. I would unlearn shame-based and fear-based messaging. I would unlearn non-nuanced discussions. We’re a highly politicized nation, but the fault has to be on both sides. It doesn’t help to yell at each other or exaggerate when there’s data right in front of you. We have clear numbers about risk, age, how to keep people safe. We have all the data, we had the data quite early on, actually. What I would hope is that those who get to inform the field and inform policies don’t do it on cable news or on social media, but rather in a really serious way, by dispassionate, data-observing scientists. I don’t know if it’s just the politicization of this country, because I think it happened across the world. But we sure had a really difficult response and a lot of sad and hurt people.

On the Biden Administration’s COVID response so far: What I see as really hopeful is the signing of the Defense Production Act and getting the vaccines out quickly. I truly believe the rollout is going as well as it could be, except that I think we should get the first dose first and wait on the second. And I’m delighted with the attention on the economic insecurity of people that resulted from the pandemic. All of that is amazing. But I still see a somewhat non-nuanced look at the data. Last week was a very confusing week for the American people: “Impending doom” on Monday; by Friday, you could travel if you’re vaccinated. That was tremendously confusing; it was just amazingly confusing! We don’t have to use scary words or sound bites. We can just literally explain it: “Hey, here’s a map of the United States. Let’s admit it. Some places are surging, some are not actually, to be honest, and it’s very complicated why.” We’re not dumb. American people are very smart.