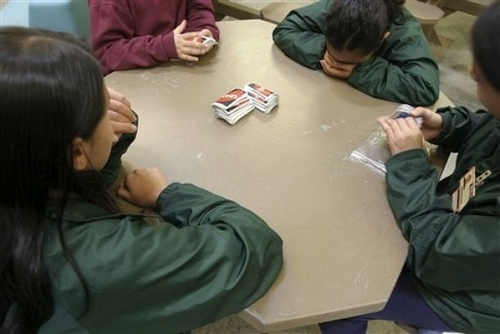 President Obama announced today a tiny sliver of his much anticipated and long forgotten plan to reform immigration policy: The US will stop detaining families at T. Don Hutto Residential Center, a CCA prison near Austin, TX that holds exclusively immigrants. I’ve never been to T. Don Hutto, but I did hang out in one of the private Corrections Corporation of America’s non-criminal detention facilities in New Jersey, the hub for undocumented immigrants snagged coming in or out of one of the New York Metro airports.

It looked, not surprisingly, like a prison. And it was run like one, if a prison had window-walled dormitories instead of cell blocks: breakfast at 7, dinner at 5, showers with no curtains and toilets with no stalls. The inmates all wore gray uniforms (including gray hijabs for Muslim women, since Muslims make up a third of the inmate population there). Mostly they made paper flowers and played dominoes while waiting for the other shoe to drop. Legally, it should take a maximum of three months. But lawyers who represent immigrants say the three month maximum detention limit is a myth.

About 400,000 immigrants go through non-criminal detention a year; 32,000 are held at any given time. Some are kept in local jails cheek-to-jowl with violent offenders. Others are shipped to privately-run facilities specially built for them, hundreds of miles from where they were picked up. Every year, some die.

Once upon a time (in 2006) people facing deportation didn’t go to prison at all. Instead, they awaited trial at home until they were either cleared to stay or sent packing. Given our country’s notorious prison congestion, you’d think there’d be more of a push to let law-abiding non-citizens keep doing their thing through months’ long deportation proceedings. And if you think undocumented immigrants are a drain on our national resources, you’d be shocked to learn how much we spend locking them up.

Unfortunately, even as reforms are implemented, more people, not fewer, will likely be headed to lock-up. In a world where CHP officers and local cops can start deportation proceedings from their cruisers, who would expect to see less?