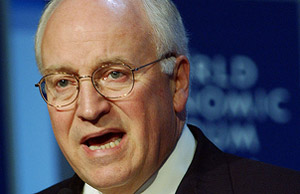 Notes from former Vice President Dick Cheney’s interview with the FBI about the leak of Valerie Plame Wilson’s covert CIA identity were finally released on Friday afternoon after a lengthy legal battle. Citizens for Responsibility and Ethics in Washington sued the Justice Department last year to obtain the interview notes; a judge finally ordered their release on October 1. In the interview, Cheney demonstrated a behavior common among Bush administration officials under investigation: he couldn’t remember much of anything. Here’s a non-comprehensive list of 22 things Dick Cheney claimed he couldn’t recall about the Plame case, in the order they appear in the FBI’s notes:

For an interview conducted around a year after the events in question, the Vice President seems to have forgotten a lot, including one very crucial detail: whether he told Libby about Valerie Plame Wilson.