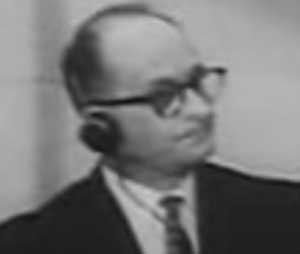 Photo of Adolf Eichmann via <a href="http://commons.wikimedia.org/wiki/File:Adolf_Eichmann.jpg">Wikimedia Commons</a>.

There is still a lot to talk about regarding the upcoming 9/11 trials and Spencer Ackerman’s comparison of Khalid Sheikh Mohammed’s appearance in a US federal court to Adolf Eichmann’s 1962 trial in Jerusalem. Like Spencer, I want to be careful not to equate Al Qaeda and the Nazis or to compare anything to the horror of the Holocaust. But Hannah Arendt’s reflections on the nature of political evil are useful in a lot of contexts, and this is one of them.

Spencer says in his excellent post that KSM’s rantings at his trial will seem farcical. But he misreads Arendt’s Eichmann in Jerusalem when he says this:

I suspect we’ll have an Eichmann-in-Jerusalem moment—and sorry for the unfortunate Nazi/al-Qaeda analogy; al-Qaeda are not the Nazis; but I couldn’t really think of any other parallel—except instead of the banality of evil, we’ll see the lunacy and vanity and self-absorption of it.

This is wrong because “lunacy and vanity and self-absorption” are banal in the very sense that Arendt meant the word. Arendt uses the term “banality” to encompass many different meanings. One of the definitions of banality—and one that Arendt definitely intended to imply—is triteness. And the kind of lunacy and vanity and self-absorption that KSM embodies is incredibly trite.

Like so many of the -isms that have previously challenged democratic capitalism, Al Qaeda’s Islamism doesn’t make a serious attempt to deal with the reality of just how powerful America is and how appealing American ideas really are. KSM’s—and Al Qaeda’s—critique of the West isn’t just divorced from reality. It’s also clichéd. When Osama bin Laden goes on his rants, he’s usually just regurgitating the same stuff that extremists of all stripes have said about American power or global capitalism or “the Jews” (or all three) for a century. Reality-free craziness is as banal as it gets.

Arendt argued that one of Eichmann’s defining character traits was “a lack of imagination”:

[Eichmann] merely… never realized what he was doing…. He was not stupid. It was sheer thoughtlessness—something by no means identical to stupidity—that predisposed him to become one of the great criminals of that period.

Arendt says it’s “banal” and “even funny” that Eichmann was so out of touch with reality that he didn’t realize the slaughter of millions of people might be wrong. He was thoughtless in the sense that he couldn’t think—”He was genuinely incapable of uttering a single sentence that was not a cliché.” KSM is thoughtless in the same way. He is so vain and self-absorbed that he has planned his “triumphant” speech (sure to come up at his trial) for a decade. It has apparently never occurred to him that when he actually explains what he did and why he did it people may not rush to take up his cause.

Arendt did not even believe that Eichmann had the ability, in any normal sense of the word, to tell the difference between right and wrong. “The case rested,” she wrote, “on the assumption that the defendant, like all ‘normal persons,’ must have been aware of the criminal nature of his acts, and Eichmann was indeed normal insofar as he was ‘no exception within the Nazi regime.'” She believed he was “neither feeble-minded nor indoctrinated nor cynical…. [but simply] perfectly incapable of telling right from wrong.”

Arendt’s not alive today to weigh in on KSM and Eichmann. But I’m sure she would have seen great similarities between the two men’s mindsets. Despite all the flaws in Eichmann’s trial, Arendt ultimately decided he deserved the death penalty. I suspect she might come to a similar conclusion about what KSM deserves.