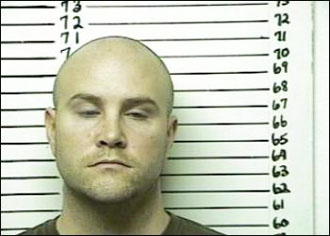 The arrest of an ex-Marine last week on child-rape and federal weapons charges has sparked a low-grade civil war within the “patriot” movement, with militia members rallying behind the accused while more mainstream groups struggle to distance themselves.

On Thursday, Charles Dyer, 29, was formally charged with child sexual abuse for alleged acts against a 7-year-old girl at his home in Marlow, Oklahoma. Searching Dyer’s home, Stephens County Sheriff’s deputies found a Colt M-203 grenade launcher, since identified as one that had been stolen from a California military base in 2006. Dyer now stands charged with illegal possession of a destructive device.

Dyer was already a notorious figure. As an active-duty sergeant in the Marine Corps, he posted incendiary videos on YouTube under the handle July4Patriot. Clad in a skull mask, he warned of grave threats to the republic and called for armed resistance against the American government. In one clip, referring to an April 2009 Department of Homeland Security report (pdf) on domestic extremism, Dyer exclaimed, “With DHS blatantly calling patriots, veterans, and constitutionalists a threat, all that I have to say is you’’re damn right we’re a threat. We’re a threat to anyone that endangers our rights and the Constitution of this republic.” He invited viewers to join him at his makeshift training area—”I’m sure the DHS will call it a terrorist training camp.”

Dyer left the Marines last year after being brought up on charges of uttering “disloyal” statements—they were later dismissed, according to reports—and continued with his video dispatches, some of which have been removed since his arrest. His postings have also vanished from the website of Oath Keepers, a fast-growing patriot group with which he was closely associated. Its founder, Stewart Rhodes, once reposted Dyer’s clips on the group’s website and praised him in speeches, but now says Dyer isn’t a member because he never officially signed up and paid dues. That has earned him the scorn of far-right activists—a blogger for American Resistance Radio called Rhodes “beyond cowardly,” while referring to Dyer as the “1st POW of the 2nd American Revolution” and linking to a support fund for the former Marine. So far, 11 donors have raised a total of $333.

Numerous militia advocates, some of whom shaved their heads in solidarity with their hairless hero, have rallied behind Dyer on the American Resistance Movement forum. “He’s our brother and he needs our help!” one wrote. “Big brother is very capable of causing conflict and confusion within our cause.” “This is doubtless a set up,” added another poster. “This is a guy I’d want on my team…a voice that can motivate and change minds. That makes him a threat to the powers that be.”

On the Oath Keepers site, a Marine from Arizona worried that the charges against Dyer could be the start of a false campaign to arrest and detain American patriots. But if the allegations are true, he wrote, “may he rot in hell.”