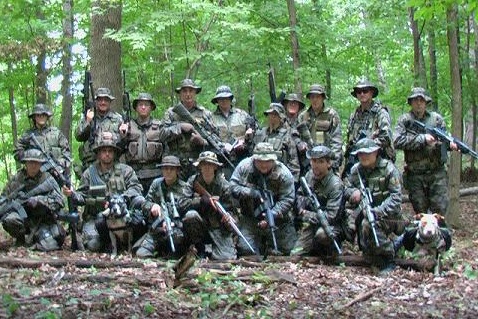 Photo courtesy of <a href="http://hutaree.com/">hutaree.com</a>

These guys make the Oath Keepers look like model citizens. The FBI raided a Michigan-based Christian militia group this weekend for allegedly plotting a campaign of violence against police officers, and to use WMD against Americans. The Feds claim the Hutaree “conspired to oppose by force the authority of the U.S. government.”

According to the indictment, “Hutaree members view local, state, and federal law enforcement as the ‘brotherhood,’ their enemy, and have been preparing to engage them in armed conflict.” So in order to oppose the government, the Hutaree targeted one of the Oath Keepers’ core consituencies: police officers.

You’d think this would turn Oath Keepers against this anti-cop militia. But according to initial responses on the group’s website, the anti-government ethos is strong enough to dispel “rumors” propagated by the mainstream media. Members were quick to call the raids a “set up” and potentially the start of a government crackdown on militias (which are constitutionally legal). Eric Hansen, for one, notes that the FBI raided a funeral where Hutaree members were “paying respects for a member who died recently.”

That sounds heartless. Until you look at the Hutaree’s detailed strategy to kill police officers. According to federal prosecutors, the Hutaree planned to murder a cop and detonate explosives at his funeral to increase the police body count. The indictment also states that the group planned to threaten police families, and place fake 911 calls luring cops into danger.

Structurally, Hutaree is incredibily similar to the Oath Keepers. They plan to oppose what they consider a rogue government, and are active on social media sites like YouTube and MySpace. But Hutaree’s core goals, murdering police officers based to religious dogma and fear of the Antichrist, are potentailly much more dangerous. Let’s be thankful that they don’t have the kind of institutional support in Congress and the mainstream media enjoyed by the Oath Keepers.